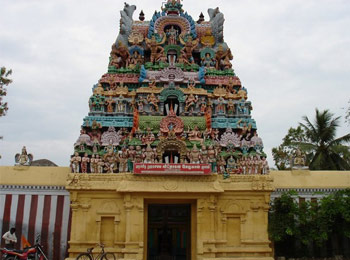 
Thiruvaiyaru (also spelt as Tiruvaiyaru) is a panchayat town in Thanjavur district in the Indian state of Tamil Nadu. It is situated on the banks of the river Kaveri, 13 km from Thanjavur, Thiruvaaiyaru has an old Shiva temple dedicated to Panchanatheeswar. Though pilgrims flock to this temple throughout the year, Thiruvaiyaru is more renowned for its association with Saint Thyagaraja, who, along with Muthuswami Dikshitar and Shyama Sastri, comprises the Trinity of Carnatic music. Thiruvaiyaru means Five Rivers around the city. Located 9 miles northeast of Thanjavur is the temple of God Harashapa Vimochana, the temple of God hari who relieved Shiva’s curse. The Pastime Shiva is bestowed with five heads by the Supreme GodVishnu and the Brahma of this universe was also five headed. 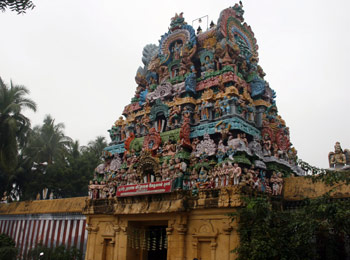 It is believed that the original temple was built by Bali Maharaja. The present structure of the temple is built by the Chola kings of the 8th century. Vijayanagar kingsand Madurai Nayakas added a few enclosures to the temple. The temple is situated on a one acre land between two rivers and has a three tiered raja gopuram facing east. There are two prakaram. The main sanctum can be reached after passing through two mantapas -Garuda mantapa and Mahamantapa. Both of them are covered with intricately carved pillars depicting various pastimes of the God. 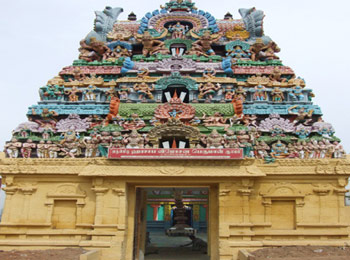 On the main sanctum sanctorum under the lotus shaped vimana, is the beautiful deity of the God harashapa Vimochana Perumal or God Kamalanatha. The beautiful God with a gentle smile enchants the minds of devotees instantly. There is a beautiful Deity of Santhana Krishna in the temple. As conditioned spirit souls, we are associated with matter from time immemorial and the God grants audience in his Deity form made of earthly materials because he is so merciful that he permits us to see him with our material eyes. This is his magnanimity. The Deity of the temple is identical to the Supreme God in Vaikuntha. By engaging in the service of God Kamalanatha, we can gradually purify our existence and will be able to have the privilege of serving him eternally! This is what the pure devotees aspire for. The second prakaram of the temple has the beautiful Deity of Mother Lakshmi as Kamalavalli Thayar. There is a separate shrine for God Narasimha and Sudharshana. To the west of the temple is the beautiful pond named Bali theertha. We can find reference to this temple in eight slokas of the Brahmanda Purana.


Kurma Purana and Padma Purana narrate an interesting episode as to how the five-headed Brahma of this universe became four-headed.Chastity is the key element of a successful household’s life. Both husband and wife should be chaste in mind and body. Vedic tradition is fully blended with such high values which are the prime essential elements in devotional life. We are naturally imbibed with such norms. Such rigid chastity includes women refraining from looking into the face of any man, even her husband. For a wife, chastity is a powerful weapon and treasure which she safeguards. Parvathi Devi, the consort of God Shiva, is a perfect example of chastity. God Shiva has five heads namely, Eshana, Tatpurusha, Agora,Vamadevam and Satyojyatam. God Brahma also had five heads. Once, Parvati Devi mistakenly performed her routine worship to the feet of God Brahma, as she did not look up at his face and thought that the five headed one before her was Shiva. Shiva forgave Parvati, but decided to punish Brahma for not objecting to the worship that Parvati was erroneously offering him. Shiva took drastic action by plucking off one head of God Brahma, as a precautionary measure to avoid such mistakes from repeating in the future. Shiva thus committed a sinful act. The decapitated head of Brahma got stuck to Shiva’s left hand. Brahma cursed Shiva to wander like a bikshadana (beggar). It was a practice in the Vedic times that for any curse, there is way out, which is usually suggested by the one who had cursed. But at this instance, rather than ask Brahma to reduce his penalty, Shiva decided to meditate on his beloved God Hari. God Shiva was fully conscious of his karma, and, acknowledging the supremacy of Vishnu, knew that only he could help him. Shiva came down to earth and started severe penance in Thirukaramabnur temple. God Vishnu answered the prayers of Shiva in Thirukarambanur and asked him to proceed to Thirukandiyur to get relief from the curse and Brahma hatya or the sin of hurting Brahma. Shiva proceeded to Thirukandiyur as a naked bhikshadana. Brahma’s decapitated head which was stuck to Shiva’s left hand became the begging bowl. Every time someone filled the vessel with food, it vanished immediately .Such was the devotion of God Shiva that he never lamented for what has happened, but was completely focused on having the darshana of God Vishnu. Once he reached Thirukkarambanur, Shiva was granted the most awaited darshana of God Vishnu who appeared with both his consorts, Sridevi and Bhoodevi. Overwhelmed with ecstasy, Shiva began to dance injubilance. Mother Lakshmi filled the skull begging bowl with food. Shiva relished the food with great joy and was immediately relieved of the curse. Thus he assumed his Kailasa five headed form. God Vishnu is known here as Harashapa Vimochana Perumal, since he gave relief to Shiva (also known as Hara).


The devotees visiting the temple seek fame, freedom from disease, wealth, courage and relief from bondage.


Tanjore is the nearest town well connected by rail and road.


The nearest airport is at Trichy.


The temple is around 12 kms from Mayavaram. There are buses directly from Mayavaram as well as Kumbakonam although frequency would be less.