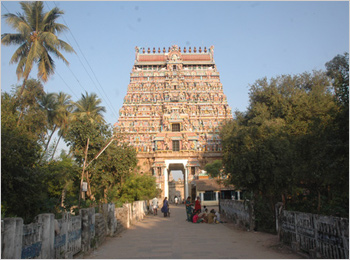 Located 215 kilometres South of Madras at the passage of the past Chola kingdom, Thiru Chitrakoodam temple in Chidambaram is home to both Saivite and Vaishnavite Lords in Kanchipuram. Similar to Ekaambareswar and Kaamakshi temples.This temple is in Chidambaram in Tamil Nadu. Drop in at Chidamabaram Railway station in the Chennai to Trichy main line. Ample bus facilities are there. Staying arrangements are well furnished. In years passed by, the bearing to Thiru Chitrakoodam was given as North of the Cauvery, East of Sri Mushnam ( Aathi Varaahan temple) and West of the Bay of Bengal.This spot is likewise alluded to as Thillai Nagar, Chitrakoodam and Pundarika folks embraced retribution at this spot articulating the name of Govinda. And were blessed with Moksham.Hence this Lord came to be called Govindarajan. Lord is praised by Saints Kulasekhara Azhwar and Tirumangai Azhwar in their Prapandam hymns. Devotees take the pain of performing penance for long years by eating fruits alone, suffer under speedy winds or stand amidst five types of fire for the grace and darshan of Lord. Simply keep Lord with Mahalakshmi in His chest in your thoughts, go to Thillai Tiruchitra Kudam, where His temple exists with sounds of Vedic Mantras and smoke of sacred Yajnas, says Tirumangai Azhwar. 10 day Chithirai Vasanth Utsav in April-May and Gajendra Moksha are the festivals celebrated in the temple. 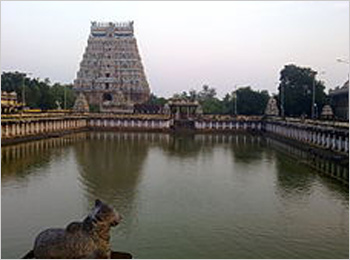 In this spot Udhanga Maharishi and ruler Uparisaravasu got the dharsan of the Lord as he is in Vaigunda Loga. Along these lines, the devout waterway Viraja which is considered to keep running over the fringe of Vaikunda loga is the theertham here. It's actual that god is one. Be that as it may, but at long last it will take to a definitive god just. So to demonstrate this the Vimaanam here is Anantha sathya Varthaka Vimaanam. To achieve Vaikunda is to accomplish existence without resurrection, and the perumal of this Kshetram would favor one in the event that we offer ourselves. 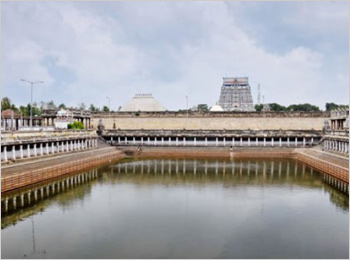 "The Moolavar of this Divyadesam is Sri Govindarajan. He is giving his seva Kindantha (Sleeping) Thirukkolam in Bhoga Sayanam confronting his thirumugham towards eest bearing. Prathyaksham for Thillai Moovayiravar, Paanini, Padhanjali and Vyakpathra Maharishi. Thayaar found in this sthalam is Pundaregavalli. She has a different sannadhi in this temple. known as Parthasarathy. He is in the sitting stance. Chitira Koodhathullan with two wives. Sri Rama in his Vanavasa Kolam (ie acts like in his timberland environment)."

Once Nataraja (Shiva) and Thillai Kaali (Paarvathi) chose to show their moving aptitude and to see who would be advised to abilities among the two. Shiva admired Brahmma for his judgment, who requesting that they perform at Thiru Vaalan Kaadu. Not able to go to a choice, Brahmma guided them to Vishnu, who made a move sabha in Chitrakoodam, for the two to show their ability here.

Vishnu is accepted to have descend here and seen the move challenge in the middle of Shiva and Parvathi. With Shiva's stud tumbling down, the group of onlookers trusted that Shiva had lost. In any case, Shiva, proceeding with his move, got the stud with his leg and set it back in the ear while keeping on moving - Oorthuva Thaandam. Parvathi couldn't coordinate this and Vishnu judged Shiva the victor.

It is trusted that Vishnu was extraordinarily awed with duel with Thillai Kaali. Subsequently, Govindarajan is found in a dozing stance with his face coordinated towards Nataraja in the Northern course. All types of move can be found in fine art inside of this temple. One can see the Chidambaram Rahasyam (the Lord in the 'type of a Yantram') inside the sanctum of Nataraja, on his right side. The Chidambaram Rahasyam is secured with a screen and is appeared to aficionados at consistent interims.

People pray here to be fair on their part in their endeavours.
Devotees perform Tirumanjanam to Lord and offer vastras.