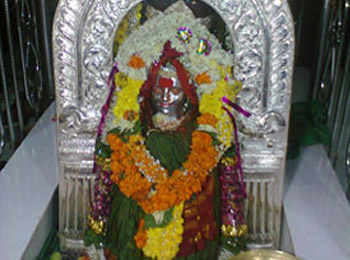 The deity of Goddess Shakti is worshipped at the holy Ghattaragi Bhagyamma Temple which is located at Ghatterga in Gulbarga,Karnataka. Many devotees know this temple as Bhagyavanthi Temple. It is situated in the Afzalpur Taluk of District Gulbarga. The two temples called Sri Kshetra Ganagapur and Sri Dattatreya Temple are located nearby this temple.

This ancient temple dates back to 1565 as the Vijayanagara Dynasty came to an abrupt end. The deity of Goddess Bhuvaneshwari was worshipped by the Vijanagar Dynasty King’s family. The last Vijaynagar King named Rama Raya was warned by the deity about his alliance with the Deccan Sultanates. The aim of the Vijayanagar Dynasty was to secure the region of Karnataka from the Islamic Invasion. There were two brothers named Bukka and Hakka who converted to Islam but then reverted soon afterwards. The King Rama Ray also saw Goddess in his dreams who had warned him about the repercussions if he allied with the Deccan Sultanates. Along with this, the Goddess also warned that she’ll leave him and his family if he continues on this path. The King didn’t pay any heed to the Goddess’s words and soon she left the kingdom, taking her blessings and fortune with her. The King was soon murdered by the Sultanates in the Talikot Battle and it is believed that Vijaynagar has been doomed since then.

The Goddess stayed underneath the Bheema River after leaving the Kingdom for several years. She used to perform penance at this very point. Once a shepherd named Jamanna heard the Goddess’s voice while taking the cattle for grazing. Upon listening to the sounds, he started praying on the banks of the river as he was a staunch devotee of the Goddess. The Goddess was glad to see his devotion towards her and appeared in front of him. She narrated the whole situation to the shepherd and he then informed all the chieftains of his village about the same. The villagers believed his story but some did not. The villagers then went to the banks of the river and a snake appeared in front of them. The snake was followed by a glass pillar and a voice from the pillar came asking the villagers to take the pillar with them. The villagers were delighted to hear the voice and decided to take the pillar, a form of Goddess to the village. The only difficulty was to bring that pillar to the shore. When no one volunteered to go into the river, the shepherd took upon himself and eventually brought the pillar to the shore. There was a snake that accompanied the pillar which made the villagers quiet scared. Soon the snake disappeared and the pillar turned into a stone. It was kept at the door steps of Jamanna.

After a while, the Goddess appeared in the dreams of Chennamma Gowd, the mother of village chieftain expressing her wish to be worshipped in their house. The Goddess’s deity was then taken by Chennamma’s son to their house and the village has been blessed by the Goddess ever since.


The festivals of Makara Sankranti, Purnima, Shivaratri, Ram Navami, Ugadi, Kartika Maasa, Navaratri, Shravana Maasa and many more are celebrated with great joy at the temple.

As per a unique ritual performed at the temple, a man is hung at a height of 30 feet from a cart with the help of a sharp hook and this ritual is known as ‘Sidi’. The devotees believe that by performing this ritual, they can overcome the problems caused by a drought. A man is chosen by the elders of the Nayaka community to participate in the ritual.

The Hubli Airport and Rajiv Gandhi International Airport in Hyderabad are nearest to the temple.

The Gulbarga Railway station is nearest to Ghatterga as it is only 57kms away. There is no station in 10km radius of Ghatterga.

Frequent road transport is available to the temple from Afzalpur which is 14kms away from Ghatterga.