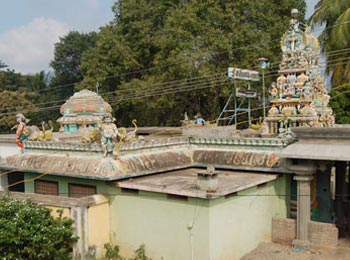 Mother Gangadevi graces in a sitting form with Her left leg bent and the right down. There is a five hooded serpent above Her. Lion vehicle is below Her. She is holding Danda, Udukkai and the nectar pot. There is also the Ambica idol in Sudha form behind the principal Ambica. Special pujas are performed to Ambica on water-related important festivals as Deepavali, Masi Magam. The abishek theertha is offered as Prasad considered very sacred as it is used for the Water-Goddess Gangadevi Herself. The faith is that keeping the water in the house would bring prosperity.

Abishek to Mother is performed with milk from 108 pots on Chitra first day occurring almost on April 14 or a day before or after occasionally. Devotees are allowed to do the abishek themselves on this day. A Prasad packet containing 9 items considered auspicious is offered to women. A sumangali Homa is also performed on this day. Wedding festival is celebrated on Panguni Uthiram in March-April. There is a separate shrine for the procession deity who will grace from the entrance hall of the temple on poornima-full moon days. There is a Light Post (Deepasthamba) at the entrance of the temple with sculptures of discus, conch, Garuda and Sri Anjaneya indicating the presence of a Vishnu temple earlier. Thuni Mudithal prayer is for child boon. This is done in a yellow cloth seeking this boon and left in the temple after prayer pujas. After getting the child, they come back to the temple, get the pack back for uncovering. Women pray with Mangal Sutra for the longevity and welfare of husbands.

Special Homas are conducted on Saturn, Jupiter, Rahu and Ketu transit days in the Navagraha shrine of the temple.

Following His separation of Ambica after the Daksha Yagna, Lord Shiva came to Earth in all fury. Even Gangadevi on His head could not endure the fury and sought the help of Lord Vishnu to bring Lord Shiva to calmness who immediately did the needful. Lord Vishnu also created seven tanks to extinguish the fire that enveloped the surrounding regions. A king built temples for Perumal and Gangadevi which disappeared in the days followed. When aliens invaded the South, Kumarakambanan, a chieftain from North came here, fought with the aliens and recovered the temples from their aggression. He stayed here on his way. A king Rajanarayana Samborayar mistook Kumarakambanan as an invader and fought him with but was defeated and hid himself in the Rajagambeera hills. The queen of Kumarakambanan came to know the glory of this hill and built this temple for Mother Gangadevi. Kumarakambanan invited Samborayar and gave him back his land. The name came to the place as Senaikku Meendan Vasal – Gate of the king returned from war.

Deepavali in October-November, Masi Magam in February-March. Aadi Pooram in July-August, Aadi Amavasya-new moon in July-August, Poornimas the Full Moon days, Panguni Uthiram in March-April are the festivals of the temple.