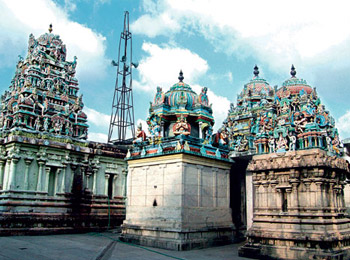 The name Ettukudi is derived from the fact that it is surrounded by etti (Strychnine) trees and that there are Shiva temples in eight directions. Ettukudi Murugan or the Subramania Swami temple at Ettukudi, though not one of the Arupadai Veedu (Six Sacred Temples of Lord Murugan), achieved popularity mainly through veneration in songs by the 14th century Tamil poet Saint Arunagirinathar and today, through folk music and other devotional songs.

The Shanmugar image is a monolithic Sculpture of Lord Murugan with 3 faces and 12 arms, seated on a Peacock facing north. The idol is sculpted in such away the whole weight of the idol is supported by the peacock’s legs. The images of the two consorts of Murugan, Valli and Deivanai, are on either side of deity.

According to legend, the form which Lord Murugan assumes here is the typical warrior-cum-hero form in His peacock – also called Veerasoundaryar. This form was taken by Him in order to vanquish the demon, Surapadhman.

Lord Murugan appears before people as a child, youth and an elderly person suiting the imagination of the devotee. Lord Soundaranayagar and Mother Anandavalli grace as the parents of Lord Murugan in the temple. There are shrines for Nardana Ganapathy, Juradeva, Srinivasa Soundararaja Perumal, Anjaneyar, Manonmani, Ammaiappan, Mahalakshmi, Shani Baghawan and Bhairava.

This temple is linked closely with a legend that the images of Skanda in all three of his shrines were made by the same sculptor. The story goes that the sculptor who made the Subramaniar image of Sikkal was awe struck by it that he vowed that no other such image should be made, and cut off his right thumb. He was then prompted by Subramaniar in a dream, to fashion another image for the temple at Ettukudi. After following the instructions in his dream, he blinded himself so that he could not create images any more. Another dream prompted him to create a third image of Skanda mounted on a peacock with the aid of a woman. When his chisel inflicted injury upon her, the blood splashed over his eyes, and in a flash he got his eyesight.

Another legend states that there once lived a sculptor in a village called Porulvaithasery. He was chanting ever the glory of Lord Murugan with Sharavana Bhava mantra. He sculpted an image of the god with six faces. Seeing the beauty of the idol, the Chola king cut off the thumb of the sculptor. The sculptor moved to another village and enduring all the pain made out another one with equal charm. The chieftain of the village enjoyed this idol’s beauty. While the idol was being completed rays of light spread from the idol and the peacock bearing began to fly. The chieftain cried “Ettipidi” (jump and catch it). In the effort to catch it, the leg of the peacock was a little damaged. Hence, the name of the place came to be known as Ettipidi, changed to Ettikudi and finally stood as Ettukudi.

Devotees pray for relief from the fear in children, removal of obstacles in marriage, child boon and education of the children. The devotee is relieved of sins when he simply touches the Saravanapoigai water.

The nearest airport is Trichy.

The nearest railway station is Nagapattinam.