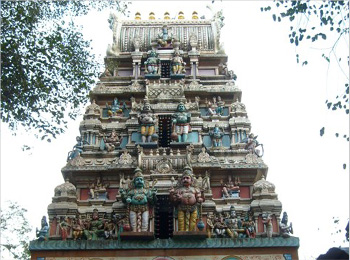 The "Bull Temple" is located in Bangalore. The bull is Shiva's mount and shares the same platform as the Vishvanath Temple. It is also called "Nandi temple". The temple has a giant bull (4.6 metres tall), carved out of a single boulder. It is a sculptural masterpiece. In Kannada, Basava means bull, which gives the name Basavanagudi to the locality. It faces the Shiva temple. A statue of Nandi the bull of Shiva is inside flanked at the back with statues of God Surya and Goddess Chandra on their chariots drawn by horses. Non Hindus are not allowed in the temple. The temple is busy always with some ceremony or other going on. On weekends there are musicians who are performing at the temple. 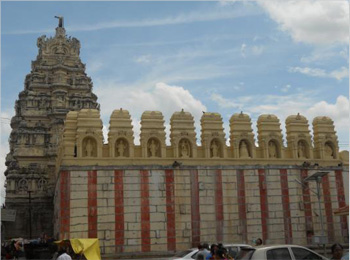 The temple was built in 1537 by Kempe Gowda under the Vijayanagara empire in the Vijayanagara architectural style, he also founded the city of Bangalore. The temple is named after the large granite Nandi monolith placed on a plinth in the temple shrine (garbhagriha) which has become blackened from years of being rubbed with charcoal and oil. The temple is a small one, consisting only of the shrine fronted by a porch in the Vijayanagara style. The current tower (vimana) over the shrine was constructed in the early 20th century and is adorned with Saivite figures and motifs. The Bhoganandiswara temple at the foothills of Nandi Hills goes back to the period of the Banas, Cholas, Hoysalas and the Vijayanagar Kings. Bhoganandiswara, Umamaheswara and Arunachaleswara are enshrined here. The kalyanamandapa is of great beauty here. The Yoganandiswara temple atop the hill goes back to the Chola period. It received extensive patronage from the Vijayanagar Kings. The pillars and metalwork deserve special mention. The image has been carved out of single granite rock. 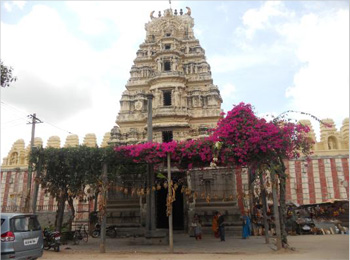 The Bugle Rock garden is behind the Dodda Ganesha temple and adjacent to the Bull temple. The garden gets its name from a bugle call made on top of a very large rock formation to alert the nearby dwellers. It is densely covered with trees and one can usually see and hear a number of bats perched on the trees. There is a water tank with motifs of famous people from Karnataka. 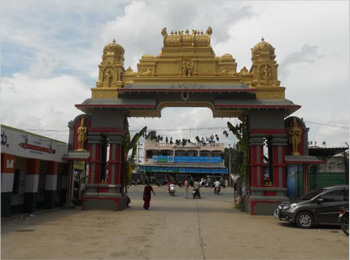 Nandi Temple is exclusively for the worship of the sacred bull (Basava in Kannada) in Hinduism, known as Nandi, Lord Shiva's vahana. The word "nandi" means "joyful" in Sanskrit.It is said to house one of the largest Nandi murthis in the world. The temple has a huge monolithic bull 4.5m tall and 6m long. It is believed that the source of the river Vishwa Bharathi originates from the feet of the Nandi. The bull has a small iron plate on its head to prevent it, as tradition says, from growing. The original colour of Nandi bull was grey which has now turned black due to the application of coconut oil by the devotees. The statue of the bull has been carved out of a single rock.

The surrounding area, known as Sunkenahalli, farmers had grown groundnut. A bull started grazing on the well-grown crop enraging a farmer who hit the bull with a club. The bull sat stunned and was suddenly transformed into a stone. The shocked farmers then decided to build a temple for the bull to atone for what they had done, but were shocked to see that the bull was growing taller! The worried farmer then prayed to Lord Shiva who advised him to retrieve a trident buried a few feet away from the bull and place the trident on the forehead of the stone statue to stop it from growing. This was done and the bull stopped growing. The thankful farmers decided to place their first crop of groundnut as an offering to the bull. Though in reality there is a trident on the forehead of the bull, this story is a legend and lacks historical evidence. Hence, this handsome Bull Temple was built and the bull apparently took the hint and stayed away from the groundnuts. The thankful farmers continue to hold a Groundnut Fair (kadalekayi parishe) near the temple premises every year, to show their gratitude. It is one of the places to visit in Bangalore. Kempe Gowda got constructed many temples dedicated to Anjaneya (God of Power), Vinayaka (God of good fortune), Nandi (Shiva's bull mount). One can see in the shrine atop the hill a massive garlanded black and shiny Nandi (Shiva's mount, the bull) ensconced, which dates back to 1786. The size of the Nandi is overwhelming. At the back is a small Lingam shrine. Its modern Gopuram rises, gracefully and majestically. The underground "Sri-Gavi Gandadhareshwara Temple" is equally fascinating, where on every year on January 14th (Makara Sankranti) it is believed that a ray of light passes between the horn of a Nandi outside the temple and lights the idol kept inside. Three levels of excavations have been carried out in the cave. One can see the black stone Hanuman. On the way to the Bull Temple there is one a temple dedicated to the Elephant God Ganesha. The Bull temple is a buzz with great activity during the Shivratri festival.

Bull Temple observes a Kadalekaye Parishe (Groundnut Fair) every year. It is held in the month of November or December. In the ceremony, the farmers offer their first harvest of groundnut to Nandi. It is kind of farmer's appreciation and gratitude towards the Bull, Nandi. The sheer size of the Bull attracts people from far and near to this shrine of religious significance.

The temple is easily accessible from Bangalore through local buses, auto-rickshaws and taxis. There are two routes; one is from Subhash Nagar-Majestic bus stand, through Goodshed Road, Chamrajpet, Viswesvarapuram and Basavangudi and the other is through Corporation, Lalbagh, Basavanagudi. Bangalore Metropolitan Transport Corporation (BMTC) runs bus number 36 and all 45 series (45, 45j, 45k etc) to Basavanagudi from Platform numbers 9 and 10 in Majestic Bus stand (Kempe Gowda Bus Station), Subhash Nagar.