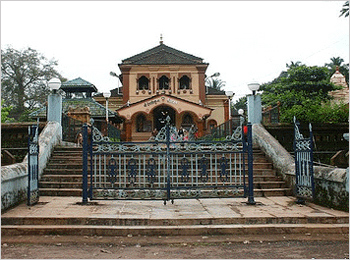 Marcel has temples of more than 15 deities of the Hindu pantheon. It lies 17 km from Panaji in Ponda taluka about 3-km away from Banastari Bridge on the Panaji-Ponda road.

Here is found India’s only temple where the presiding Deity is Sri Devaki-Krishna, which is Sri Krsna and His mother together in Deity form. Sri Sri Devaki and Krsna are together in the temple by Bhumika Devi, Laxmi Ravalnath, Mallinath, Katyayani, Chodaneshwar and Dhada Shankar. Like many of the regions transcendental personalities, the Devaki-Krsna Deities were subjected to displacement due to foreign invasion. Originally located at Chorao Island in Tiswadi, all the temple Deities were moved to Mayem in Bicholim to escape the wrath of the Portuguese rulers. Eventually they were established at the present location at Marcel. The Devaki-Krsna Deity is the main feature of the garbha griha, or inner sanctum of the temple. Mother Devaki is depicted in a standing posture with child Krsna between her legs. Beautifully carved in black stone, the pose of the Deities is also very unique. Also known as Pisso Ravalnath, the Devaki-Krsna temple is also home to a life-sized murti of Sri Swamy Ravalnath, which was installed in 1974 by Sri Srinivasa Prabhu, the oracle of the temple. In a separate temple a life-sized stone Deity of Sri Devaki holding the baby Krishna has been installed and it was consecrated by HH Srimad Sudheendra Thirtha Swamiji in 1981. The oracle is organised every full moon day. These Deities were carved by the famous sculptor, Renjal Gopal Krishna Shenoy. More than 15 other Hindu temples of note are found in the small town of Marcel, including Sri Kamakshi temple, Sri Mahalakshmi temple, Sri Manguesh temple, Sri Saptakoteshwara temple, Sri Shantadurga temple at Kavalem, and the Sri Vithal temple. 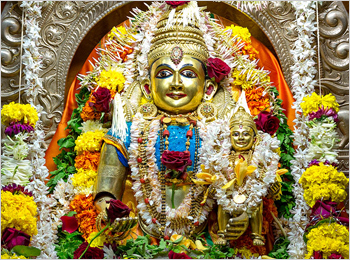 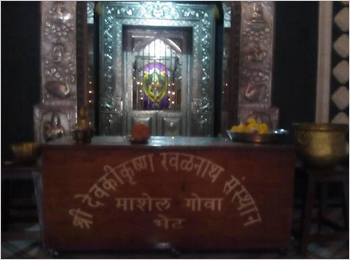 In response to his mother’s wish, Lord Krishna once again assumed the form of his childhood, climbed up the laps of Devaki as she was churning curds, sucked her breast-milk, broke pots of curds, swallowed lumps of butter, and stood up with the churning rod in one hand and the churning rope in another, after snatching them away from his mother’s hands. Devaki’s joy knew no bounds, as she witnessed this sport of the Lord. Rukmini, who also sighted this childhood posture of the Lord, requested him to get an image of it carved out in Shaligrama Shila for her daily worship. When Krishna departed from earth at the close of Dwapara Yuga, this rare image was deposited by Arjuna at a holy spot called Rukmini Vana in Dwaraka. In the course of the Kali Yuga, a merchant carried this image as merchandise from Dwaraka, mistaking it for a clod of Gopichandan in which the image lay hidden. The ship was wrecked near the sea-shore of Vadabhandeshwar (near Malpe port) Madhvacharya came to know the wreckage of the ship by intuition, got the image dug out of the ship, kept it immersed for a few days in the holy tank of his mutt, and installed it for worship on an auspicious Makara Sankranthi day, nearly 700 years ago. Hence forth, Lord Krishna became the presiding deity of Udupi. He is the source of happiness and salvation of all good people. Madhva installed this image of Krishna with the avowed purpose of removing all obstacles and relieving the pains, which beset His devotees on their way to salvation.

The Devaki-Krsna Deity is offered regular worship by Atri, Kasyapa, Vatsa, Kaudinya, Vasista, and Bharadwaj gotras. Ramanabami and Gokulastami are celebrated here on grand scale. The palakhi is taken in Shukla and Trayodashi (except in Chaturmas). The major festival is Malni Purnima from Paush Vadya is celebrated over here with great fervour and excitement during January-February. The pilgrims from all over India would be visiting Devaki-Krishna temple on the Malin Purnima. This is the main festival of this temple that attracts the devotees from everywhere. The three anniversaries of the temple as well as Navarathri festival are celebrated annually. Shri Chandika Yajna is also organized annually.

The nearest airport was Dabolim airport.

The Nearest Rail head is at Margao.

Ponda is served by regular buses from Panjim and Margao, and lies on the main route east to Karnataka. The Kadamba Bus Stand is on the main square, next to the auto-rickshaw rank. There are many buses and private vehicles available to reach the temple of Devaki-Krishna temple.