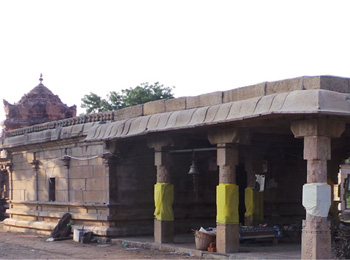 Sevalur, Bhoominathar temple is a renowned shrine located at Sevalur, in the Pudukkottai district of Tamil Nadu, India. The principal deity of this temple is Lord Bhoominathar and Aranavalli Amman (Thayar). This is one of the few temples revered for Vasthu pujas. The Prithvi theertham (temple tank) near Sevalur is a holy tank which is considered sacred for performing Tarpanam for the ancestors. The Shivalinga has many stripes (Pattai) which were said to be formed while Bhoomadevi (Mother Earth) worshipped Lord Shiva with turmeric, sandal, kasthuri and butter pastes at the end of each Yuga.

Mother Earth is said to have undergone a cycle of four Yugas covering billions of years. She is said to have performed an intense penance in Krutha Yuga. Krutha Yuga is the first of the 4 Yugas. Bhoomi devi is believed to have performed this hard penance, seeking sufficient strength to bear the burden of growing population in the coming Yugas. Lord Shiva had appeared before Bhoomi Devi (Mother Earth) and granted her wish. He is said to have assured her that the penance was adequate to bear the population burden in even the Kaliyuga that she would be able to bear the burden only through the prayers offered by her devotees. Hence Bhoomi Devi (Mother Earth) began searching for such true devotees in many sacred places and worshipped many Swayambumurthis on her way. One such Moorthy is Sevalur Lord Bhoominathar.

The Maha Shivarathri celebrated during tamil month of Masi (February-March), Panguni Uthiram in the month of Panguni (March-April), Tirukarthikai in the Karthika month (mid of November-December) and Margazhi Tiruvadhirai in (December-January) are the main festivals celebrated in this temple.

It is a general belief that worshipping Lord Bhoominathar will relieved one from the fear of natural disasters like earthquake. This Lord is said to show his devotees the path to resolve settlements in land disputes, remove the obstacles in performing their duties, resolving the delay in constructions, increasing agricultural yields, providing relief from doshas (sins) resulting from cutting of sacred trees as Arasu, Vembu and banyan and anthills during constructions, relief from difficulties in jobs and for remedy from back pain and problems in hip areas.

The nearest airport is at Tiruchirappalli.

The nearest railway station is at Pudukkottai.

Local Buses from Pudukottai stop at avplace called Kulipirai, enroute to Ponnamaravati. Autos can be hired to reach Sevalur which is around 3km from here. Occasionally bus No. 6A also stops here.