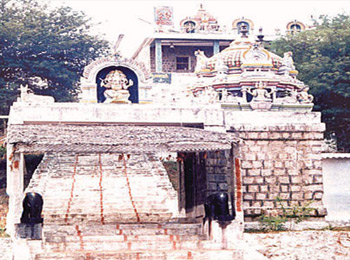 The Baladandayuthpani Swamy Temple is situated at the town Gobichettipalayam, in the Erode district of Tamil Nadu, India. This temple which is dedicated to God Muruga, is located on top of a small hillock in the outskirts of this town. The temple follows the Dravidian style of architecture.

The Baladhandayuthapani temple at Gobichettipalayam is a very ancient shrine in the state of Tamil Nadu. A number of yogis and devotees are said to have visited this temple to seek the blessings of Lord Muruga.

The town of Gopichettipalayam holds the distinction of having three hills, namely Pachaimalai, Pavalamalai and Andavarmalai with Lord Lord Muruga as the presiding, but in different forms.

Lord Muruga graces as Balamuruga in the Pachaimalai hills, as Muthukumara swamy in Pavalamalai and Baladandathuthapani in Andavarmalai. Lord Muruga is considered the “Tamizh Kadavul”. He is the presiding deity of various Sangam literatures, especially the Tirumurugattrupadai, which comes under the “Pathu Pattu” literature. Pathupattu, Ettuthogai and Pathinenkeezhkanakku together are regarded as the famous Tamil Sangam literatures. Almost every literature in Tamil has mentions about Lord Muruga in some form or other.

Lord Muruga is believed to be the creation of Lord Shiva from his six divine sparks, which are his five faces and the sacred eye on his forehead. Six is a very holy number in Hinduism. According to Hinduism, there are six Sects and six Goshas. Basic life points in human body known as Aadara Chakras are six. Vedas and Ithikasas are also six. Gnanamargas (Path to wisdom) and the revered Sasthras are six in number too. Lord Muruga is said to be the combination of all these great philosophies that make the constitution of this great Vedic religion, now popularly known as Hindu religion. The benevolent Lord Murga appears in the Andavarmalai hills in the standing form, showering abundant blessings to his devotees.

According to Tamil grammar, land mass in this world is divided into five types of eco-systems. Mountain, hill and associated area is called 'Kurinji' in Tamil. The lord Muruga is the presiding deity of Kurinji, the mountainous region. Most of his famous temple sites in Tamil Nadu are located around the hills.

Long ago, Saint Dhurvasar is said to have visited the place Kunnathur, which lies 18 Kms south of the present Gobichettipalayam. He worshipped Lord Shiva at Kunnathur, when he decided to perform his routine Shiva worship in a place called Modachur, on the outskirts of present Gobi town, since the place was apt for the purpose. While his stayed there, he wished to get the divine darshan of Lord Subramanya. He undertook penance when he couldn’t find even a single Subramanya Swamy temple.

Through the power of his penance, he found out that there was a Subramanya temple on a small hill at a distance of around 1.5 kms from Modachur, where the main deity is seen facing the west. The saint found the Subramanya Swamy temple over the hill and offered his prayers to the deity there. He also got to know the similarities between this temple and the famous Dhandayuthapani temple at Palani, where the Lord is facing west.

All the above mentioned events were forgotten as time passed. In the year 1954, a landlord named P.K.Kuppuswamy Gounder visited the temple when he decided to renovate the temple. He was saddened by the poor state of the temple and felt that the Lord was not properly taken care of. He wanted to perform regular poojas to this deity and bring the temple back to its glory.

Starting then, the renovation of the temple was completed in a fast pace with the first Swarnabandhana MahaKumbabishekam being performed in the year 1980. This festival was led by Thiru.P.K.Eswaran as renovation committee head and since then, a large number of devotees have contributed towards its renovation works there after.

All new moon days-Amavasya, monthly Kruthika star days and Sashti (sixth day from new moon or full moon days), Panguni Uthiram in March-April, are grandly celebrated in the temple. Poojas for three times a day (Moondrukala pujas) are performed to Lord Muruga at this temple.

The Nearest railhead is the Erode railway station.

The closest airport is Coimbatore airport.