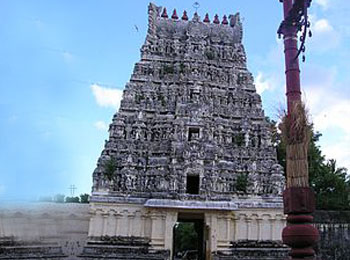 Sthalasayana Perumal Temple (also called Arulmaakadal Perumal Temple) is a Hindu temple dedicated to the god Vishnu located near Kollumangudi, Tamil Nadu, India. It is located 2 km away from Kollumangudi, 40 km away from Kumbakonam and 10 km from Karaikal. Constructed in the Dravidian style of architecture, the temple is glorified in the Divya Prabandha, the early medieval Tamil canon of the Azhwar saints from the 6th–9th centuries AD. It is one of the 108 Divyadesam dedicated to Vishnu, who is worshipped as Sthalasayana Perumal and his consort Lakshmi as Thirumagal Nachiyar. A granite wall surrounds the temple, enclosing all the shrines. There is a four-tiered rajagopuram, the temple's gateway tower, in the temple.

A special feature of this temple is that this is one of the only two Divya Desams where the image of Vishnu is depicted in Sayana Kolam (sleeping posture) facing the Southern direction, the other being Srirangam Ranganathaswamy temple.

It is believed that Garuda, the eagle vehicle of Vishnu, does not fly over this place. Once Garuda and Adiseshan (the snake on whom Vishnu rests in his abode Vaikunta) got into an argument as to who was more powerful and devoted to their lord. Finding Garuda a little arrogant, Vishnu went in favour of Adisesha. Worried that Garuda might be angered at this, Adisesha sought the protection of Vishnu, upon which Vishnu asked him to roll himself and hide under him. It is said that as a result of this anger, Garuda never flies over this place. There is another legend that Adiseshan won the argument and since snakes were sworn enemies of eagles, Adiseshan hid himself under the waters of the temple tank. It is henceforth believed that devotees will be relieved of Naaga Dosham (affliction due to serpent god) if one visits this temple. Unmarried people and childless couple can also visit this temple for salvation.

The temple is revered in Nalayira Divya Prabandham, the 7th–9th century Vaishnava canon, by Thirumangai alvar. The Azhwar has sung praise on the different forms of Sthalasayana Perumal. The temple is classified as a Divyadesam, one of the 108 Vishnu temples that are mentioned in the book.

A granite wall surrounds the temple, enclosing all the shrines. There is a four-tiered rajagopuram, the temple's gateway tower, in the temple. The presiding deity is Sthalasayana Perumal and is a small image depicted in Sayana posture. The idol of Vyaghrapada is found along with that of Kanvar in the sanctum sanctorum. All episodes connected with this place are found in the fourth chapter of the Brahmanda Purana. Saint Tirumangai Alvar visited the temple, but was not satisfied with Vishnu's small image of "Balasayanam", he requested him to show his gigantic pose. Vishnu asked the saint to go to Thirukkannamangai to witness his Vishvarupa. The presiding deity at Chirupuliyur is also named by the saint in his Periya Thirumozhi verse. The name of the presiding deity in Sanskrit is Kripasamudra Perumal. He is also known as "Saranagatha Rakshaka Perumal", by which name the saints have addressed the god Aamaruviyappan in Therazhundur. A separate shrine for Adhiseshan is present near to the pushkarani - known as Ananthalwar Temple.

Shiva ordered the sage Vyaghrapada to perform penance at Srirangam requesting the god Vishnu to give him place in his abode Vaikunta. Vyaghrapada was joined by sage Patanjali in his journey. Because of his poor eyesight, the sages instead went southward, lost their way and reached Krupa Samudram, modern day Tirusirupuliyur. They prayed to Vishnu to come to Srirangam to grant them moksha(divine attainment).

It is believed that Vishnu originally gave darshan (appeared) to the sages as Ranganatha, the form worshipped in the Srirangam temple. Because of their old age, the sages could not see the big image of Vishnu clearly and hence he appeared in a smaller form known as Bala Sayanam (smaller recline), the sleeping posture of a small kid. Being in smaller form, and the saint who worshipped was in the form of a tiger, this place is called Siru (meaning small) Puli (meaning tiger) yur (meaning dwelling place)

Kollumangudi is 35 km from Mayiladuthurai. Bus facility is available between these two places via Peralam. Tiruchirupuliyur is 3 km from Kollumangudi. The Nearest railway station is Peralam. The nearest Airport is in Trichy.