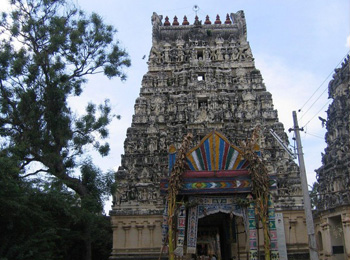 
Sri Arulmaakadal Perumal Temple also called as Sthalasayana Perumal Temple, one of 108 Divya Desam temples is located at Sirupuliyur, Nagapattinam district of Tamilnadu, dedicated to Lord Vishnu. This temple lies in the Tanjore district of TamilNadu. It's about 2 miles from Kollumankudi which is on the Aranthangi - Maayavaram railway route. There is not much of places for staying.Saint Tirumangai Azhwar had sung the glory of Lord of the temple forming part of the celebrated Naalayira Divya Prapandham. Chithirai Tamil New Year Day falling almost on April 14; Vaikasi Brahmmotsavam in May-June; Aadi Perukku and Aadi Pooram and Jestabishekam in July-August; Gokhulashtami in August-September; Navarathri Pavithra Utsav in September-October; Aipasi Manavala Mamunigal utsav on Moola star day in October-November; Tirukarthikai in November-December; Margazhi Vaikunda Ekadsai in December-January; Makara Sankranthi-Pongal falling almost on January 14; Masi Shukla Paksha Ekadasi in February-March and Panguni Uthiram in March-April are the festivals celebrated in the temple.Lord Krupasamudra Perumal graces the devotees from the sanctum sanctorum under the Nandiyavardhana Vimana.

Sages Vyakrapada and Vyasa Bhagwan and the divine serpent Adisesha were granted darshan by Lord Perumal in the temple. Devotees perform Tirumanjanam to Perumal and offer vastras.An exceptional component of this temple is that this is one of the main two Divya Desams where the picture of Vishnu is delineated in Sayana Kolam (dozing stance) confronting the Southern bearing, the other being Srirangam Ranganathaswamy hawk vehicle of Vishnu, not fly over this spot. When Garuda and Adiseshan (the snake on whom Vishnu rests in his house ) got into a contention in the matter of who was all the more effective and dedicated to their ruler. Discovering Garuda a bit pompous, Vishnu went for Adisesha. Stressed that Garuda may be incensed at this, Adisesha looked for the security of Vishnu, whereupon Vishnu requesting that he move himself and stow away under him. It is said that as an aftereffect of this displeasure, Garuda never flies over this spot. Another legend was that Adiseshan won the contention and since snakes were sworn adversaries of hawks, Adiseshan shrouded himself under the temple's waters tank. It is from now on trusted that fans will be assuaged of Naaga Dosham (tribulation because of serpent god) if one visits this temple. Unmarried individuals and childless couple can likewise visit this temple for salvation.

The temple is revered in Nalayira Divya Prabandham, the 7th–9th century Vaishnava by Thirumangai alvar. The Azhwar has sung praise on the different forms of Sthalasayana Perumal. The temple is classified as a Divyadesam, one of the 108 Vishnu temples that are mentioned in the book. Festivals are Brahmotsavam festival (May or June), Masi Shukla (February or March), Margazhi Vaikunda Ekadasi (December or January), Rama Navami (March or April) and Krishna Jayanthi (August or September). The Mangalasasanam is Thirumangaialwar are 10 Paasurams. The Pushkarani is Manasa Pushkarani. Vimanam is Nandha Vardhana Vimaanam. 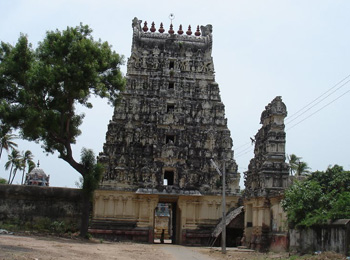 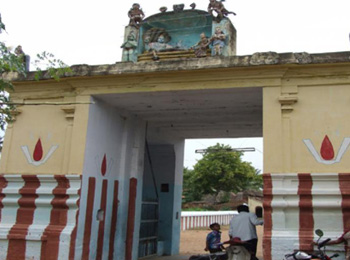 The presiding deity of this temple is Lord Sthalasayana Perumal (Lord Vishnu) and the Goddess is Thirumaamagal Naachiyar (Goddess Lakshmi), the consort of Lord Sthalasayana Perumal. The presiding deity is seen here in Sayana kolam (sleeping posture) facing towards the south. Only in two of the Divya Desam temples, Lord Vishnu is seen in sleeping posture. The other temple where Lord Vishnu is seen in Sayana kolam is Srirangam Ranganathaswamy temple. The festival deity of this temple is Lord Kruba Samudra Perumal and Goddess Dhaya Naayagi, the consort of Lord Kruba Samudra Perumal. It is said that Garuda, the vehicle of Lord Vishnu does not fly over this temple. The idol of the sage Vyaghrapada is also found in this temple. Sri Arulmaakadal Perumal Temple is glorified in Nalayira Divya Prabandham, the Vaishnava and hymns were sung by the saint Thirumangai Azhwar.Moolavar of this sthalam is Sri Arulmaakadal. He is likewise called with different names like Arulmaakadalamudhu, Salasayana Perumal. He is giving his seva in Kidantha (Sleeping) Thirukkolam in Bhujanga sayanam. Prathyaksham for Vyasa Maharishi and Viyakra Padarishi. Thayaar found in this sthalam is Thirumaamagal Naachiyar. What's more, the Utsavar Thaayar is Dhaya Naayagi. And the Utsavar Thaayar is Dhaya Naayagi. The Utsavar found in this sthalam is Kriba Samudira perumal. 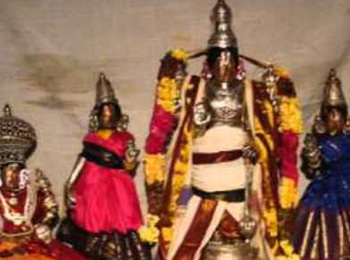 Thirusirupuliyur Divyadesam is one of the most established Divyadesams goes back even to Garuda Puranam with 2 Praharams and a 75 feet statue Raja Gopuram which is likewise worshiped in Thirucchirupuliyur, Chalasayanam and Bala Vyagrapuram. Once there was a Sage named Vyagrapadhar experienced a thorough compensation towards Lord Shiva in Chidambaram to accomplish Moksham. Master Shiva gave him his prathyaksham and requesting that he go to Srirangam and Aranganathar is the person who just can favor him Moksham. Since Srirangam is far from Chidambaram the Sage requested that Lord Shiva offer the Tiger's Legs to reach Srirang am speedier and he got that as well. Be that as it may, because of his old age and the poor vision the Sage went in an alternate bearing and had the capacity reach just Thiru Sirupuliyur rather than Srirangam . Since he couldn't continue further, he experienced a retribution here itself. Satisfied Paranthaman showed up before the Sage in HIS Gigantic Kidantha Thirukkolam ( Sayana Posture ) as HE favors in Srirangam Divyadesam. It is trusted that the Lord initially offered darshan to the Rishi as Lord Aranganathar in his Full Form as large as in Srirangam. Since the Sage was with poor visual perception, the ALMIGHTY later honored him as Tiny structure in HIS Bala Sayanam. The unique component of this Thirusirupuliyur Divyadesam is that the ALMIGHTY can be worshipped in Sayana Posture Facing initial one is Srirangam and the other one is this Thirusirupuliyur Divyadesam . Other than this is the One and Only Divyadesam to have a different sanctum for Adhisheshan . Moolavar is favoring as Arulmadakadal, Salasayana Perumal in Bhujanga Sayanam Facing South. Thayar is Saaranayagi. Utsava Morrthy is venerated as Kiruba Samudra Perumal.

The icon of Vyagarapadhar is set at the Lord's foot in Moolasthanam.Egoistic Fight Garudan and the Serpant Adhisheshan on whom Paranthaman leans back got into an egostic battle that who was all the more capable and gave to the ALMIGHTY. They came down to this Thirusirupuliyur Divyadesam and approaching the ALMIGHTY for the arrangement. Master showed up as Kirupasamudran and by seeing Garudan more egotistical, HE went for Adhiseshan. Frustrated Garudan turned out to be more outrage and as an aftereffect of which Garuda Never flies over this spot even now . By seeing furious Garudan, Snake God got feightned and expecting an irate response from Garudan asked move himself and lie under HIM. From that point forward Adhisheshan got to be Athi Varadahar – The first Moolavar made out of the tree "Atthi" which was submerged in the temple tank is being taken out from the tank Once in 40 years and put for the 10 days adore. road parade of Lord Varadharajan on HIS Garuda Vahanam is being praised in a terrific way in the Tamil month of Vaikasi. The Golden and Silver Lizards – Once the wise's pupils "Gauthama Rishi" , was inconsiderate and a Lizard hopped out from the water they set before his master. By seeing this the sage got irate and reviled the supporters to wind up Lizards. They got then mitigated when Indhiran came here as Gajendran to worship Varadarajan here. It is unequivocally trusted that the general population Who supplicates Moolavar Varadarajan and touches the Lizards on out will get cured from all their interminable sicknesses and issue.

The Saints and Kanchipuarm Kanchi Varadar Temple is the spot where Thirumanagai Azhwar got cash for the development of compound around Sreerangam Divyadesam. This is the One and Only Divyadesam where Vedhantha Desigar eneters into the Main sanctum in the Tamil month of Purattasi. Indeed, even the Azhwars have not this benefit . Thirukacchi Nambigal used to fan the keep Him from the warmth and he used to have a cooperation Kanchipuram must be moved to succeed Alavandhan in Sreerangam. Thirukkachi Nambigal had got consent from the ALMIGHTY, henceforth Kanchi Varadhar got the credit of giving Sreeman Ramanuja to Sreeran 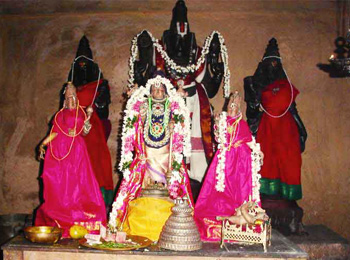 This is one of the 108 Divya Desas having a place with Lord Perumal gift the fans in leaning back stance, His face at the south course. Perumal conceded Darshan to Sage Vyakra Pada – Sage with legs of tiger-Puli Kaal Munivar in Tamil-as a Balaka-young man. Henceforth the spot is named Tiruchiru Puliyur. Lion's share of the devotees look for youngster help from Lord Perumal. Ladies worried about the life span of their spouses and their Mangalya soundness supplicate here. Fans confronting different unfriendly parts of the planets and those confronting delayed ailment, mental issues are encouraged to go to Perumal for alleviation. It is the staunch conviction of the enthusiasts that their requests to God would present to them the help they wish


Majority of the devotees seek child boon from Lord Perumal. Women concerned about the longevity of their husbands and their Mangalya stability pray here. Devotees facing various adverse aspects of the planets and those facing prolonged illness, mental problems are advised to pray to Perumal for relief. It is the staunch belief of the devotees that their prayers would bring them the relief they wish. Devotees perform Tirumanjanam to Perumal and offer vastras.


The nearest Airport is Tiruchirapalli Airport, located 145 km (90 mi) away from the town. Nagapattinam railway junction connects Thiruvarur in the west, Nagore in the north, Velankanni in the south and Karaikal in the east and for every major cities. There is a daily express train to Chennai via Mayiladuthurai and Ernakulam via Coimbatore. Nagapattinam is connected by two national highways, NH 45A to Villupuram and NH 67 to Coimbatore and Gundlupete in Karnataka state. And it is connected with Chennai, Coimbatore, Tiruchirapalli, Karaikal and other major towns of Tamil Nadu. The State Express Transport Corporation operates long distance buses connecting Nagapattinam to Bangalore, Thiruvananthapuram and Marthandam.