The Arulmigu Arthanareeswarar Temple is dedicated to lord Shiva and is located between Salem and erode in TamilNadu. The hill abode can be reached by road or could be travelled by foot, which consists of about 1200 steps. Tiruchengode is in south India in the state of Tamil Nadu, approximately 20 km from the City of Erode, 46 km from Salem, and 120 km from Coimbatore. 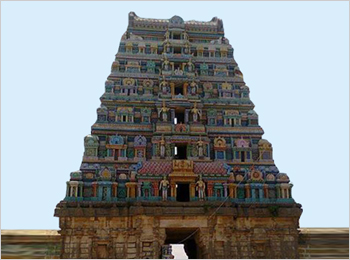 This 650 ft. high hill has got many names like Nagamalai, Chemmalai, Nandhimalai ,etc. Nagagiri is the hill standing in the middle of Thirukodimada Sengundroor and is also sung in Thevaram . The other names of the hill are Panimalai, Nagachalam, Siva-malai, Uragaverpu, Kodaimalai ,etc. It is 2000 feet overhead sea level and contains around 350 acres land . Its striking feature is that it looks changed from different angles. It is actually made by Nagamalai besides Nandimalai. North vision appears as though snakes are spreading its hood while the eastern view replaces as Sivalingam .The Western view represents that a snake is all set to engulp and the Southern view reminds devotees of Thirukayilai. Around 1206 steps have to climbed to reach the temple. As per the wall inscriptions it must have been constructed about 2000 years back. The past rulers of Tamilnadu had carried on many renovation works. 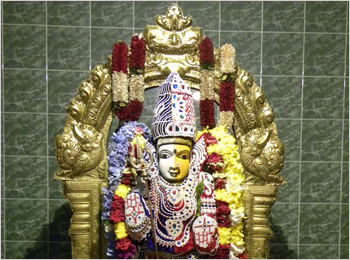 Nandhimalai and Nagamalai is fragmented by a small valley Nagar pallam. It is the prime past of the gigantic mountain Nagamalai. On both the sides of the steps a huge snake is seen with 5 heads distributing its hood having the father of the world in the form of a Sivalingam. It is believed that on the hood of the snake rivers Ganga besides Yamuna and Saraswathi flow as holy water. This engraved stone Snake is worshipped with Kumkum and camphre. Pongal is also made for it. 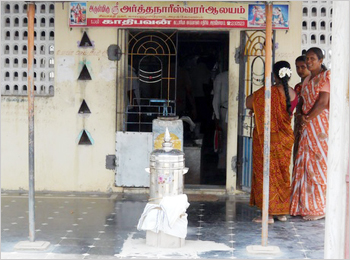 After crossing some Mandapas beyond Nagar pallam, there are some extraordinary steps termed Arubadam Padi which means 60 steps or Sathya Vakku Padi meaning steps of truth. Amongst the 1200 steps the most significant ones are these 60 steps. All the 60 steps of Sathya Padi are of same order and thus a good example of the architectural brilliance of Tamilians. These 60 steps were used by the general public to resolve, unsolvable cases and to identify the reality in cases of credits and bargains in olden times. It is believed that the people say only the truth standing-up on the 60th step. Even the Supreme Court at Chennai has believed the declarations that were made by the people while standing up on the 60th step. On climbing around 425 feet further the famous Pandeeshwara temple can be reached. It is fondly called Ucchi Pillaiar. A Lingam besides Pillaiar can be seen here. A stone Varadikal called Maladi kal or Vandhya Paatana Sikara lies on its west. To get the blessing of a child by the grace of ucchi pillaiar besides Ammai Appan Lord Arthanareeswara the bare parents offer their prayer here.

Keeping Arthanareeswara in mind and start circling the Arthanareeswara hill while advancing one foot devotee will achieve equivalent benefit of Yagam while for second foot he will get the benefit of Raja suya Yagam .With clear mind of third step Aswameda Yagam can be achieved. Who continues ahead will get benefits of all Yagams .During circling we can smell the fragrance of mooligai which results in good health. Girivalam involves a specific procedure.The hill should be encircled barefoot. "Om Namashivaya" is to be muttered .Along with it Arthanareeswara hill peak is to be viewed. There is no restriction on the time for circling the hill but it is preferred to do it at night.It is because of the faith of formers and sidhas that during night heavenly stars circle the hill along with us.The whole circling path is around 7 kms which takes normally 1.5 hours to cover.

Ammaiyappar theertham or Deva theertham is the most significant one as it is set up at the feet of God Arthanareeswara idol in the sanctum. This fresh water spring was created by God's blessings and the power of Rishis as well as Siddhars. Eluppai Tree is the temple tree which is called the Sthala Vruksham is on the north side.

God Arthanareeswarar provides salvation souls, from the hill top shrine. Lord Sengottuvelavar as well as Lord Adhikesava Perumal are found in separate temples.They are the presiding idols. God Arthanareeswarar is present in an exclusive form .It consists of half male and half female. The lord is also called Madhorubagan and Ammayappan. This unique position of the Lord as chief deity is found only here. In Hindi language, 'Artha' means half and 'Nari' means lady. This suitably matches the idol here, as Shiva shared half of his body with Parvathi. The left side of idol is Parvathi, and right side is Shiva. There are different beliefs on the formation of this idol. One such belief is that the idol is made by Siddhars out of Ven pashanam , which is a mixer of variety of herbals in a particular ratio. And another is that the idol is formed naturally (known as 'Suyambu ') and not made by anybody. The Lord Arthanareeswara is facing western direction here, which is not common amongst Shiva temples.

Long back Adiseshan and Vayudevan battled often to prove their powers. Due to their fights many disasters occurred .Sages suggested both to demonstrate their powerfulness. Consequently Adisesha had to press and shelter Mount. Meru with hood while Vayu had to release the pressure by his bravery. Vayu was not successful. In fury he ceased the air instead of blowing it .The living beings fainted due to lack of air. People requested Adisesha to release his hold. Vayu did it so powerfully, that the mountain top together with Adisesha’s head were thrown on earth on three places with flesh and blood.One is Thiruvannamalai,the next Srilanka and the other is Nagamalai in Thiruchengode.

Thirukodimada Chengundrur now called as Tiruchengode is celebrating Vaikasi visaga festival every year in a grand manner. The special feature of the festival is there are four car chariots.The first is for Lord Vinayagar,the second belongs to Lord Sengottuvelavar, the third to Lord arthanareeswara and the fourth for Aadhikesava perumal.

It is auspicious to garland the lord with Vellerukku, Vilvam, Lotus, Champa, Mandarai, Padiri, Sengkaluneer, Ponnarali apart from usual Sandal, KumKum and Viboodi. There is a spring under the feet of Lord Arthanareeswara, which never dries. Devotees believe that the water from this spring is special holy divine water (known as Deva theertham). It is also believed that, this holy water can cure any disease if consumed for one mandala (48 days continously). The priest who is doing pooja serves this holy water to the devotees as Prasadham.

yercaud is a hill station in Salem District, in Tamil Nadu, India. It located in the Shevaroys range of hills in the Eastern Ghats; the Yercaud hill area is called the Shevaroy Hills. It is situated at an altitude of 1515 metres (4970 ft) above sea level, and the highest point in Yercaud is the Servarayan temple, at 5,326 feet (1,623 m). It is so named owing to the abundance of trees categorised as a forest near the lake, the name signifying Lake Forest.As a popular tourist destination, Yercaud is also called as Jewel of the South.Yercaud is connected to city of Salem.

Kiliyur Falls is a waterfall in the Shervaroyan hill range in the Eastern Ghats, Tamil nadu, India. The waters overflowing the Yercaud Lake fall 300 ft (91 m) into the Kiliyur Valley. The falls is situated at a distance of 2.5 km (1.6 mi) from the yercaud lake. The final 500 m (1,600 ft) or so consist only of a rough unpaved steep pathway. But it is a breathtaking sight in the monsoon time when the water levels are at the maximum.The best time to visit this place is immediately after the monsoons. The temperature never rises above 29 °C (84 °F) or goes below 13 °C (55 °F). Coffee and citrus fruits, most notably oranges, are grown in abundance apart from bananas, pears and jackfruit. Scenically, Yercaud is as enchanting and picturesque as the hill stations on the Western ghats and trekking here can be one of the most pleasurable ways to pass time.

The falls is situated at a distance of 2.5 km (1.6 mi) from the yercaud lake. The final 500 m (1,600 ft) or so consist only of a rough unpaved steep pathway. But it is a breathtaking sight in the monsoon time when the water levels are at the maximum. The best time to visit this place is immediately after the monsoons.