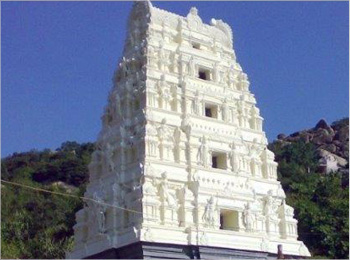 The presiding deity of this temple is Lord Anjaneya (Hanuman), who is called by the name Arthagiri Sri Veera Anjaneya Swami. It is said that the rays of the sun pass through the sanctum and fall on the feet of Lord Anjaneya and finally the sun’s rays disappear when it goes beyond the head of Lord Anjaneya.

It is said that during Tretayuga, Lord Hanuman bought Sanjeevani, a powerful life-restoring herb, to save the life of Lord Lakshmana when he fell unconscious during a war.

It is believed that during Lord Hanuman’s journey, half of the mountain he was carrying fell down at a particular place which is named as Arthagiri, where ‘Artha’ refers to “Half” and ‘giri’ refers to “Mountain”.

Frequent buses are available to Arakonda village and from there we need to take an auto rickshaw to reach the temple.