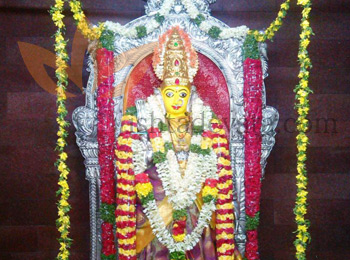 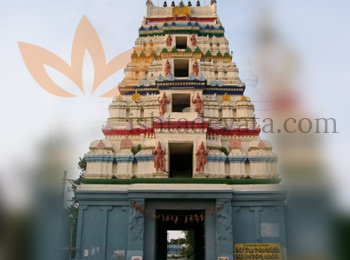 On all four sides of the Amaravati temple are large gopurams in a usually Dravidian  architectural style.  As per the Hindu mythology, Amareswara, Amaravati temple is devoted to Lord Shiva, the 'destroyer of the Universe'. The Amareswara Swamy temple is found on little hammock named as Krouncha Shaila in Amaravati, concerning fifteen miles, faraway from Guntur, nearest to Vijayawada in Andhra Pradesh. This Amaravati temple constitutes one of the 5 Pancharama temples of Andhra Pradesh dedicated to Lord Shiva. The other four of Pancharama temples are Kumararama, Ksheerarama and Bheemarama and Draksharama. Vasireddy Venkatadri Naidu, King of Chintapalli and later Dharanikota, was a great devotee of Amaralingeswara. He expanded and renovated the temple. The popular legend has it that once during the course of putting down a rebellion in his land the King had to have recourse to a massacre of the Chenchus, whereupon he lost his mental peace, which he regained only when he came to Amaravati. He shifted his place from Chintapalli to Amaravati in 1796, and devoted his entire life, time and revenues to building temples for Lord Siva. He renovated the Amareswaraswamy temple here, engaged nine learned archakas for the daily archana of the Lord, and provided them with all the needs of livelihood, including 12 acres (49,000 m2) of land to each. The temple as it stands owes much to him.

Amaravati temple has also a wealth of inscriptions on its walls like those of the Kota chiefs of Arnaravati and of Sri Krishandevaraya, the great Vijayanagara emperor. On a pillar in the Mukhamantapa the wife of Proli Nayudu, who was minister of Kota King Ketaraja, has left an inscription.


The Sivalinga here is very tall that the archakas mount a pedestal platform, and perform the daily rituals as well as Abhisheka. The top of the Linga has a red stain on it. It is said that Sivalinga was growing up in size and to stop its growth, a nail has been hit onto the top of the Sivalinga. When the nail dug into the Linga, blood started to ooze from the Sivalinga it seems. The stain can be seen even today. 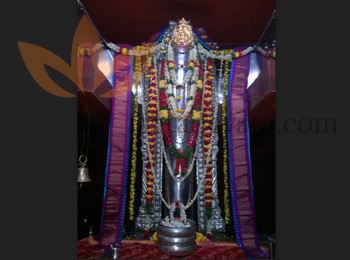 Skanda Purana tells the story of the temple. The sthalapurana for the temple is an interesting story. At the end of Dwaparayuga 5053 years ago, Maharishi Narada was asked by the Sounakadi rishis as to the best means to obtain liberation.  Narada told them that as Lord Krishna had created the river Krishna, so had he advised the rishis to live near the river and bathe in its holy water to attain salvation. If a devotee remains in this area for more than three days and worships Lord Amareswara with devotion, after a dip in the holy river, he will attain salvation.

If a devotee dies here, he will be absorbed into Lord Shiva. There are many more legends from the Kshetra mahatmyam and the Kshetramurthy Mahatmyam. Once there was a town called Dhanyakatakam or Varanasi. The legend says that, the demons defeated the gods after being awarded a boon by Lord Shiva.  Shiva vowed to kill the demons and hence the gods came to reside here and since then the place came to be called Amaravati.  Lord Amareswara is worshipped here with his consort Bala Chamundika who is considered as the fourth of the 18 goddesses.  There are other minor deities in the temple.

This ancient temple is dedicated to Shiva and enshrines a 15 feet high white marble Linga, surrounded by massive walls with towers. The temple stands close to the Krishna River.  The origin is shrouded in mystery, though there are many legends in the puranas (epics). The temple is surrounded on all four sides by towering gopurams in Dravidian style. The vimana is also in the same style.

Legend says that the temple was originally Buddhist and was adapted for Hindu worship. Hence the foundations are laid in Buddhist style. The mula virat in the sanctum has a white marble lotus medallion, made in ornate style of the early Buddhist sculptors. The mulavirat is a vertical cylinder made of white marble as found in Buddhist monuments.

The Linga is 15 feet tall, another legend states that this was originally the Ayaka Stambha or an Ayaka pillar, and which was later consecrated as a symbol of the Shivalinga.  The temple is a perfect example of the Dravidian style.  The gopuras came into prominence, only during medieval times and no stone epigraph is found before the 11th century suggesting its late origin.  There is a wealth of inscription on its walls by Kota chiefs of Amaravati, and one by Krishandevaraya on the erection of a mantapam here. On a pillar in the Mukhamantapa, the wife of Proli Nayudu, dependent of Koppara Kesanivarma, has left an inscription. 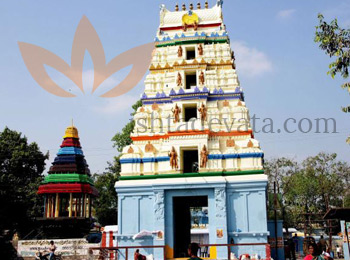 The Amaralingeswara Swamy Temple is crowded with devotees during different festivals and it is one of the best times to experience the true South Indian rituals. Maha Shivaratri is the major festival of the Amaralingeswara Swamy Temple. Celebrated during the Hindu month of Magha Bahula Dasami (which is generally the month of March), during this festival devotees bathe the Shiva Lingum with milk on all the four phases of the day. Navaratri is also celebrated with great pomp and show at the temple, during the Hindu month of Ashwin (September- October) The Kalyana Utsavs are celebrated throughout the year at the temple. These are marriage festivals and hence, visitors can witness the typical South Indian style of the wedding during the wedding months at the temple. Janmastami, the celebration of the birth of Lord Krishna is also celebrated at the temple. This festival generally takes place during the month of Bhadon (July or August).

Besides the festivities, there are regular rituals performed at the Amaravathi Amaralingeswara Swamy Temple. During the ritual of Dhoopa, Deepa, Naivedyam, the air of the temple complex is filled with the aroma of incense and the sound of bells create a celestial environment. Abhishekam is another important ritual of the shrine. Milk is poured over the Shiva Lingum, chanting the holy mantras or just ‘Om Namah Shivai.’ As the Shiva Lingum is very high, hence pedestal has been arranged for the devotees so that they can perform this ritual with ease.

The temple opens at 6 am in the morning and remains open till 1 pm.

The temple is again opened for visitors at 4 pm and remains open till 8.30 pm.

The temple is closed between 1PM and 4PM everyday.

It is said that the Linga was continuously growing in size and a nail was hammered in at the top to stop its growth.

The Amaralingeswara Swamy Temple is believed to fulfil the good wishes of the people. Worshipping at this temple is believed to resolve family issues. Amaravathi is an important site of Hindu and Buddhist religion. It was a centre of Buddhist art and still bears many relics of the same. River Krishna is considered pious and devotees often dip in its holy waters to cleanse their souls. The Amaralingeswara Swamy Temple is also unique in its style of worship. Unlike other Shiva temples, Abhishekam (the custom of pouring libations) is performed from upstairs as the 15 feet Shiva Lingum is too high to be reached from the ground floor. Besides its religious significance, the temple is also historically important. The inscriptions which are engraved on the walls of the shrine describe the ruling kings of the region.

This 1800 years old temple is located near Amaralingeswara Swamy Temple and is dedicated to Venugopal, an incarnation of Lord Narayana.

One of the most popular temples of Andhra Pradesh, this temple is also known by the name of Shirdi Sai and is dedicated to the saint, Sai Baba. Dedicated to Goddess Lalitha Devi, this temple is an abode of peace. Be here during Rama Navami and Vijaya Dasami to enjoy the colours of festivals. The temple is one of its kind, was built by Bhakta Ramdas, a devotee of Lord Rama in the 17th Beautifully lit in the evenings, it is a lifetime experience to visit this temple. Also known as the Amaravathi Stupa, this Buddhist relic depicts the wonderful art and architecture of ancient India. This stupa is adjacent to the Amaralingeswara Swamy Temple.

Located at Hyderabad, this serene idol of Lord Buddha is a popular tourist destination. With a height of 17.5 metres, this statue is located on the banks of the Hussain Sagar Lake.

The nearest airport to the Amaravathi Amaralingeswara Swamy Temple is the Vijaywada It is located 82 kilometres from the temple.

The Pedakurapadu is the nearest railway station to the temple; located just at 19 kilometres from Amaralingeswara Swamy Temple. Guntur is located at 35 km from Amaravathi.

There are several state buses, APSRTC which ply non-stop between Amaravathi and Guntur headquarters and is a journey of just 45 minutes. These buses also connect the temple city with other cities of the state, like Vijaywada, Mangalagiri, Sattenpalle and Hyderabad. Tourists can also opt for private air-conditioned buses for a comfortable journey to the temple. There are cabs and auto rickshaws available from Guntur which takes go to the temple. The road to the shrine is in good condition.