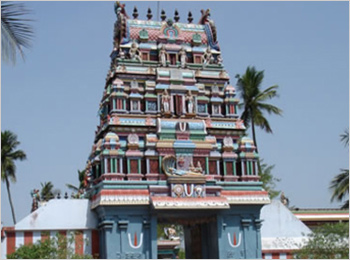 
The Andalakkumayyan Perumal temple, Adanur, is located 11 kilometres from Kumbakonam is dedicated to the Supreme God Vishnu.


The temple which is facing east is comparatively small yet magnificent. The three tiered rajagopuram is a simple one with dwarapalakas sculptured on it. The dvajasthamba is made of copper with Garudadeva praying to the God with devotion. Inside the sanctum sanctorum we can find the beautiful God Andalakkumayyan seated in reclining position on Adishesha with a marakkal as a pillow and an iron pen and palm leaf in His hands. Sri Devi and Bhoodevi are seen at the lotus feet of the God. Brahma is seated on a lotus emerging from the navel of God Andalakkumayyan. Bhrigu Muni, Mother Kamadhenu and Thirumangai Alwar can be seen in the sanctum, offering their prayers to the Supreme God. The enchanting smile of the God will immediately steal our hearts! The festival Deity is called Sri Ranganatha and is seen with His consorts Sri Devi, Bhoodevi and Andal. There are two pillars in the sanctum known as manathoon. Devotees hug these pillars as they replicate the same two pillars at the Srirangam temple. The vimana of the God is known as pranava vimana and the small pond adjacent to the temple is known as Surya Theertha. The temple as we see it today was built by the devotee king, Aditya Chola. There is a separate shrine for Lakshmi Devi. She is known as Ranganayaki in this temple. There are also separate shrines for Yoga Narasimha, the Alwars and acharyas. 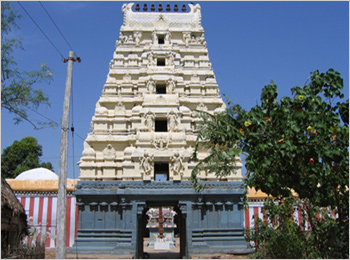 The God decided to give darshana in Andalur, in the same way that Thirumangai Alwar had darshana. Therefore we can see the God with a measuring bowl for a pillow, and a pen and palm leaf in each of His hands. He took the name Andalakkumayyan (one who measures). The presiding deity of this temple is Lord Aandu Alakkum Ayan (Lord Vishnu) in reclining posture facing the east direction and Thayaar(consort) is Goddess Ranganayaki. The Lord has a Marakkal (a measuring tool) under His head, Olai Chuvadi (palm leaf) and an Ezhuthaani (writing instrument) in His left hand. It is believed that the Lord Aandu Alakkum Ayan watches all the activities of Jeevathmaas (every individual soul) and said that the he rules the Jeevathmaas by calculating the good and bad activities of them, including plants and animals. There are two pillars in the sanctum sanctorum of this temple which is similar to the pillars in Sri Rangam temple. The idols of Kamadhenu and Tirumangaialwar are also present in this temple. The Sthala Vriksham (temple tree) of Sri Aandu Alakkum Ayan Perumal Temple is Patali tree. The temple tank of Sri Aandu Alakkum Ayan Perumal temple is Surya. 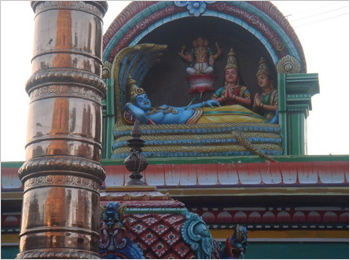 The legends of the divya desams are known by the templeâ€™s sthala purana. According to the sthala purana, Adanur is the place where many important pastimes of the Supreme God manifested.One of the pastimes is associated with the great sage Durvasa. In Chapter 44 of the Brahmanda Purana, it is mentioned that once Brahma and Shiva got into a quarrel. The quarrel was so violent that as a result of the anger of Shiva, all the devas fled from his presence. Shiva’s consort Parvathi complained to God Vishnu that it was almost impossible to live with Shiva. Realising the inconvenience his anger had caused, God Shiva decided to deposit his anger into a great Muni patni’s (wife of a sage) womb. Accordingly, Shiva deposited his excess anger into the womb of Anasuya, the wife of Atri Rishi. A rishikumar (son of a sage) was born to Anasuya and he was named Durvasa (literally, one who is difficult to live with). Durvasa lived up to the reputation of his glorious birth. He had an irascible nature. Durvasa was a great devotee of Vishnu and would visit Vaikuntha often and sing in praise of God Vishnu. As a mendicant, Durvasa was travelling all over the universe preaching dharma. Once he happened to see a beautiful maiden named Vidhyadhari in the sky with a parijatha garland in her hands. Upon enquiry, Durvasa came to know that the garland was meant for God Vishnu. Durvasa took it as an opportunity to render his devotional service to the Supreme Personality of Godhead, and, taking the garland from Vidhyahari, proceeded to Vaikuntha. Paying obeisance to the nithya suris (eternally good beings) in Vaikuntha, Durvasa proceeded to have darshana of God Vishnu. In Vaikuntha Durvasa saw that the inhabitants were flying with their consorts in different types of airplanes made of gold, emerald and other gems. They all were just doing one thing - singing in praise of God Vishnu. Durvasa noted that while singing the glories of the God. The inhabitants even derided the presence of the blossoming madhavi, mandara, kunda, kurabaka, utpala, champaka, arna punnaga, nagakeshara, bakula, parijatha which all are fragrant and laden with honey. Seeing all this opulence of Vaikuntha, Durvasa paid obeisance to God Vishnu and offered the parijatha garland. God Vishnu was seated on a beautiful couch of Adisesha with His consorts Sri Devi, Bhoodevi and Neela Devi. When Durvasa was about to leave Vaikuntha, God Vishnu presented him the prasadam garland. Durvasa was ecstatic and continued his travelling mission. On the way Durvasa saw Indra, the king of the devas. God Indra was riding on his white elephant Airavatha. Indra paid obeisance to Durvasa, and, pleased with him, Durvasa gave Indra the prasadam garland he had just received. Indra placed the prasadam garland on the head of Airavatha. Apparently, the elephant was apprehensive of bees that the nectar in the flowers on the garland would attract, so he threw the garland down and stamped on it, destroying it. Durvasa fell into a rage for two reasons; the garland was the prasadam of God Vishnu and it was again mahaprasadam to Indra because it was given to him by his spiritual master (Durvasa). Durvasa’s anger knew no bounds and he cursed Indra, “Oh Devendra you have not respected this mahaprasadam which is transcendental and the source of all wealth! You have not respected me and God Vishnu! As a result, you will lose all your wealth and reduce to be as insignificant as an ant. You have showed disrespect to me as a result of your unbridled pride and arrogance.”

Indra begged pardon from Durvasa, but the sage did not relent. He said, “Look here Devendra, I am not as merciful as other sages. I do not have the quality to pardon others. Sages like Gauthama pardoned you and your arrogance has doubled. I will not pardon you!” Durvasa left the place in a huff. Indra’s wealth was looted by asuras and he was left with practically nothing. Indra came down to a sacred spot called Bhargava Kshetra. - Adanur. The place got the name Bhargava Kshetra because it was here that Bhrigu Muni prayed for a child. As a result of the intense penance of Indra, Lakshmi Devi came with God Vishnu and relieved him of his curse. This place where God gave darshana to Indra is called as Adanur. There is another interesting legend associated with this place. Once the celestial mother cow Kamadhenu wanted to have darshana of the God. She began penance here in Bhargava Kshetra. To test her devotion, God Vishnu gave her a marakkal (traditional measuring instrument for measuring rice etc.) and asked her to fill it with her offerings. No matter how much offering was supplied, the container simply couldn’t be filled. Lakshmi Devi took compassion towards Mother Kamadhenu and placed a tulasi leaf in the vessel. The marakkal was filled instantly. Kamadhenu surrendered to the God and stayed there to serve the Him. Thus Bhargava Kshetra was renamed to Adanur by the God as a mark of the devotion of Kamadhenu. In Tamil aa means cow and then means tapas and oor means place - thus Aa-then-oor or Adanur.


It is believed that worshipping Perumal in the temple would bring in prosperity in the family and bless the devotee with excellence in educational pursuits. Devotees offer vastras and special nivedhanas to Perumal.


This is the only temple where one can have darshana of Thirumangai Alwar in the sanctum, along with the main deity.


The Andalakkumatyan Temple can be accessed by


The nearest airport is at Trichy.