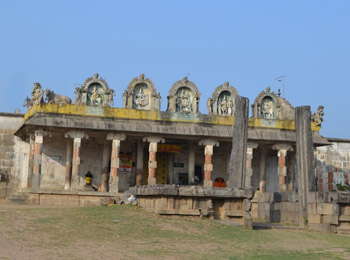 Sree Pragannayagi Samedha Sree Advalleeswarar Temple is an historic Shiva temple that was present even during the period of Vedas. This ancient shrine is located at the Munnur Village, in the Tindivanam Taluk of Tamil Nadu, India. Munnur lies around half way between Marakkanam and Tinidivanm, nearly 20 kms from both the towns. This village has the distinction of housing two ancient temples built by Pallavas, Cholas and Vijayanagara empire. The chief deity Adavalleeswarar is seen facing the direction south here, which is quiet rare to find elsewhere. This is also considered a renowned Guru Parihara Sthalam.

The temple structure is considered to be more than 2700 years old and was initially renovated by Chola King Kulothunga the II. Later a number of rulers from the Chera, Chola, Pandiya, Chalukya and Pallava dynasties and other territorial Kings like Nalliyakodan, Sambhuvarayars, Athiaman, Kangeya Rayan, Bangala Rayan generously donated towards this temple. One can find about 52 stone inscriptions here, which mentions about the various donations made by the chola and pallava kings in order to maintain this historic temple.

The stone inscriptions reveal that the temple was praised as the “Kailash on Earth” and “South Kailas” by great saints and sages. According to legends, this temple was constructed on a sacred tank called Brammha Theertham, while the deity here appeared as a Suyambu Linga which was found by a cow. The main sanctum sanctorum of the Lord Shiva is in the form of a “neerazhi mandapam” believed to have been built by the Goddess Parvathi herself go worshipping the Lord.

As per the information deduced from these stone inscriptions, it can be understood that the place was also widely referred to as Munnutrumangalam, Minnam and Mujnoor during ancient times. Sirupanatrupadai is one among the Sangam literature works that was written by Nallur Nathathanar which contains few important notes on Munnur.

There is a village near Munnur named Advallikoothan (Shiva dancing with his spouse) where Lord Shiva graces here in his dancing form, in order to teach a lesson to the arrogant and egoistic Rishis of Tarugavanam. The Lord also gave his divine dharshan to the chola king Kulothunga here. Thus the Moolavar in this temple is called Sri Adavalleeswarar. It is also believed that Lord Dakshanamurthy graced Sanakathi Maharishis here in Yoga Mudhra.

The Vanni tree is the Sthala Virusham of this temple under which Lord Vinayagar and Maharaja are found. Worshipping these deities here is said to minimise the bad effects caused by Raghu and Kethu (planetary gods). Those who bathe in the Bramma theertham (name of the temple tank here) during Guruperarchi (transition of Jupiter or Guru) and worship Lord Adavalleeswarar here is said to earn immense blessings of the Guru Bhagvan.

The presiding deity of the temple is Lord Shiva who graces here as Lord Adavalleeswarar, while Sri Pragannayagi, Goddess Easwari and Devi Kamakshi are the three Ambigais present in this temple.

Gurupeyarchi, Annabhishegam, Mahasivarathiri and Arudhra Dharshan are the most prominent festivals celebrated in this temple. Other than these days, Pradhosham and Poornima (Full moon) are also observed in this temple. Velpooja Festival takes place in the month of Chithirai during Agni Nakshatram to the Lord Siva Subramaniyar, which was workshipped by thousands of devotees.

The devotees who worship in this temple will have a long life. If any threat to the life due to the position of Grahas in their horoscope will be vanished after made worship at this temple and be blessed by the God with a prosperous long and peaceful life. The Devotees who worship here will be cured off from any prolonging unidentified diseases.

Since the deity facing south and in the sight of lord Guru, unmarried persons particularly those who are searching for suitable alliance for a very long time may come and worship here hopefully for early and happy married life.

The nearest airport is the Chennai Airport.

The nearest railway station is the Tindivanam (22 km from Temple).

The major bus stand located closest to this shrine is the Tindivanam bus station. A number of Private and public buses are operated from Tindivanam to Marakkanam state high way. One has to get down here at Allankuppam Village (19 km from Tindivanam) from where a local share Auto can be taken to reach this temple.