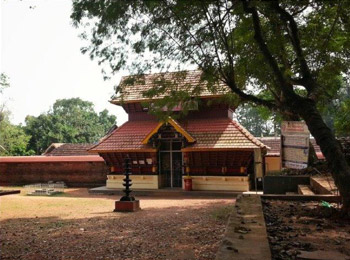 The Sree Valayanad Devi Temple is dedicated to Bhagavathy. It is situated in Valayanad, Kerala. The temple was built in the 14th Century by the Zamorins. During his conquest of the kingdom of Valluvakonathiri, the Zamorin could not control the Govindapuram despite having a military advantage. Legend says that the Zamorin could manage this only after worshipping the Goddess intensely.

Valayanad Devi temple, dedicated to Bhagavathy, is situated in Valayanad on Mankavu Govindapuram route in the city of Kozhikode. The temple, which faces north, has four gopurams. The Devi temple at Valayanad has its own distinct identity and is different in several respects from other Devi temples in India. It is one of the Saktheya temples where pujas are performed in accordance with practice of Ruruji worship. The priests of this temple do pooja according to "Saktheya" injunctions. They are Moosads who follow the Kashimiri way of worshipping. The Sreechakra, designed by the great Sivayogi Thayyavur Sivasankar, remains in the sanctum sanctorum, where the presence of the goddess is believed to be ever present. Idols of Shiva, Thevaara Bhagavathi, Lord Ayyappa, and Vigneswara, Ksethrapaalan (Lord Subrahmanya) are also consecrated in this temple. In the sanctum sanctorum on the southern wall idols of Sapthamathrukkal (seven mother Goddesses) is encarved. An important ritual conducted in this temple is the Guruthy Tharpanam.

Valayanad Bhagavathi is the family deity of the Zamorin Kings (Ilayidath Swaroompam), who ruled Kozhikode in the medieval period. Legends say that in a fight between the Zamorin and Valluva Konathiri (the king of Valluvanad), the Zamorin got defeated in spite of having better military and financial might. The Zamorin pondered this, and decided that the Bhagavathy's blessings were with Valluvakonathiri. The Zamorin undertook Tapas in disguise, at Thirumanthamkunnu temple, the family temple of Valluvakonathiri, until Devi manifested before him. The Zamorin requested Bhagavathy to come to his kingdom. While they were travelling, Devi told Zamorin that whenever he hesitates and turns back to check whether Devi was with him, she will return immediately. After some time, when the jingling of her dance-bells could not be heard, the Zamorin looked back. Devi then told him that she wouldn't come any further, but as a reward for the Zamorin's devotion, would throw her bangle, and the spot where it fell would have her presence. This bangle rotated for a week and landed at the place where the temple now stands.

The annual festival commences every year on the day of Karthika of Makaram and continues for seven days. Devi's 'utavall is kept in Tali Mahadeva Temple. Few days before the 'Uthsavam'(festival) It is taken to Valayanad temple.The 'Arat'( the holy dipping of the idol after the 'Pallivetta') is conducted in Trissaala kulam in Mankavu. During the annual festival There will be not Madhyama ( saktheya ) Pooja. Brahmins were brought the temple to perform the Uthama Pooja. Kalamezhuthupattu is observed from 1st Vrichikam for 41 days during the Mandala season. Tuesdays and Fridays are considered to be more auspicious for praying in this temple.

The Calicut International Airport is 26 kilometres (16 mi) from the city at Karipur. Regular domestic services are operated to major Indian cities. There are frequent international flights to the Middle eastern air hubs like Dubai, Abu Dhabi, Salalah, Muscat, Dammam, Riyadh, Jeddah, Sharjah, Bahrain, Doha and to domestic hubs Chennai, Bangalore, Mumbai and New Delhi. The Kozhikode railway station is the only A1 railway station in Palakkad railway division and it is situated in the Shoranur-Mangalore section. Kerala State Road Transport Corporation (KSRTC) runs regular services to many destinations in the state and to the neighbouring states. The city has three bus stands.