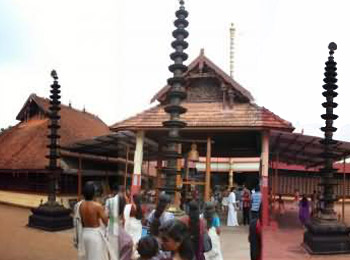 The Sree Subrahmanya Swamy temple is located in Haripad. It is among the oldest Hindu temples of Kerala. The temple is also known as the South Palani temple. It is enriched with the existence of the almighty Velayudha Swami who is merciful and a protector.

Lord Muruga with one face shines always with sacred ash or sandalwood paste. As the temple is in Kerala, puja procedures are strictly followed. After crossing the spacious hall at the entrance, the 70 feet tall dwajashamba (flag post) greets us. There is also a gigantic Main Tower – Rajagopuram. The foot prints below the tower are worshipped as the very foot prints of Lord Muruga. The temple has the graceful blessings of Lord Brahmma, Lord Vishnu and Lord Shiva, according to belief.

It is believed that this temple is 3500 years old and was consecrated by Lord Parasurama himself. There are several inscriptions in this temple in Tamil. The temple got fire and was reconsecrated about hundred years back. There is a story that after building the temple, the Namboodiris were in search of a proper idol to consecrate here. One of them was ordered in the dream to go to Kayamkulam and visit a pond (there he was told that a garland would be floating at one spot and if he makes a search there, he would get the suitable idol). The Namboodiris went there and got an idol, which was installed in the temple with four arms. One arm holding a Vel, another Vajrayudha, one showing the sign of blessing and one hand touching the thigh. This idol was brought and consecrated on the Pushya (poosam) star of Makara Masa (Thai maasam- January-February). This day is celebrated as the consecration day of the temple every year. In memory of that, they celebrate Vigraha Labdhi Jalolsavam.This is carried out for three days after Thiruvonamin Payipattu backwaters (river). The people who are participating in this celebration come in groups singing Vanjipattu, offering vazhipadu(worship) on Thiruvonam day, and only then, the Aavani festival Aarattu Ezhunnellathu in Chinga masam will start.

It is believed that in Kalivarsham 2874 Vrichikam 11,on the star of Karthika, half minute (Ara Kshanam) before noon, Lord Subramaniya idol was installed with Eakachakra, while a saint appeared and did the installation and the Jeeva Kalashabhishekam. That saint was believed to be Lord Sree Hari, and hence, Eakachakra village came to be known as Harigeetha puram or Haripad.

Around a century back, the temple caught fire, making all the devotees sad. In that fire the temple was destroyed completely. The temple which is seen now, was built during the period of king Sree Chithira Thirunal Rama Varma. Edavakkattu architects (Shilpi’s) rebuilt the temple present now. The Golden Flag which was cut off in 1096 was reinstated after 58 years. The Keezhthya Kovil which is situated on the south side of the temple plays a very important role in the temple history. Lord Muruga’s Bihanded (Dwi bahu) idol is installed here.

This temple is older than Sri Subramania temple. Besides the main deity, there are many other deities which include Sri Dakshina Moorthy, Lord Ganesha, Thiruvambadi Kannan, Nagaraja, Sri Shasta, Keezhtyar Kovil Subrahmanya. Kavadiyattam’, “Karakattam’ and ‘Kavadi’ are the main ways of worship here. Kavadi is a bow-shaped wooden structure decorated with tapestry and peacock feathers carried on the shoulders of pilgrims as an offering to Lord Muruga. People believe that the Subrahmania idol has the Sannidhya (presence) of Shiva, Vishnu and Brahma. Several peacocks wander in this temple. The major offerings in this temple is called Thula Payasam. People also offer a garland made of lime fruits to Lord Subrahmania.

Demon Surapadma was harassing the Devas in the celestial world. When he was attacked, numerous demons were born from each drop of his blood. They were terrorizing the world. Surapadma had a boon from Lord Brahmma that he could be killed only by a child of seven months of age.

Six sparks that came from the eyes of Lord Shiva mingled together and became a child named Karthikeyan. (The story in Tamilnadu is that Surapadma was killed by Lord Muruga when He grew into a boy. In Kerala, the story is different.) The child was taken care of by Mother Parvathi up to seven months. When Surapadma came to kill the child, the child took a huge form – Vishwarupa – and killed the demon. The child did many miracles then. The child taught its own Father. It undertook the creation of world for some time. When the child came to Kerala, the place of Sage Parasurama, Lord Vishnu (Hari) greeted the child with welcome songs. As Hari sang here –Padu – the place came to be known as Haripadu. Lord Hari (Vishnu) asked his nephew (Muruga) to stay in the place and grace the devotees.

Special pujas are performed in the temple on all Kruthika Star day in the year. A 10 day festival is celebrated during the months of Avani (August-September), Margazhi (December-January) and Chithirai (April-May).