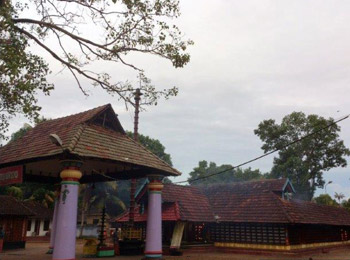 This is an article on the Thiruvizha Mahadeva kshetram (Siva temple) at Thiruvizha near Cherthala and Alapuzha on the Ernakulam – Cherthala Road.

This is a Sivan (Mahadevan) temple. In the sanctum there is a small pit with water in it and a Lingam, symbol of Lord Siva is partially seen in the pit. The Lingam will be completely under water during rainy season and may not be visible.

In the temple premises there are other deities. One of the deities is of a Yakshi. For the Yakshi milk gheer (paal payasam – a kind of milk pudding made of milk, rice sugar etc.) is offered as neivedya (food offering to deities). A portion of this neivedya was given to the madman at noon after which he was cured of the mental problems.

When the temple was built in the present place, a mad man (insane) used to be around this temple. The devotees were terribly frightened because of the presence of the mad person in the temple area and they started praying to the deity of this temple to cure the mad man of his insanity. One day one of the devotees belonging to a Nair family had a dream to tie up the mad man overnight and as per the dream a new plant will sprout near the temple. The person was to pluck a hand full of the leaves of the plant to be given to the priest of the temple. The priest will take out the juice of the leaves and mix the same with cow milk. The mixture of the milk and juice will change color from blue to dark red to black to yellow and lastly to white. He performed the pantheeradi pooja to the Lord Siva of the temple keeping three coins before the deity. After this ritual of the pantheeradi pooja the milk with the plant juice used for the pooja was given to the mad person. After about an hour lukewarm water was given to the mad man and after that he vomited the contents of his stomach.

The annual festival is Aarattu festival. This is in the Malayalam month of Meenam (March - April months of the English calendar). There is another festival in the Malayalam month of Dhanu (Marghazhi – Saggitarius zodiac). Kanichukulangara Devi temple is having an annual festival of 21 days. This festival is known as the Kumbham thiruvathira Aarattu. Thousands of people attend this festival from local and far away areas. The famous Nadaswaram vidwan Thiruvizha Jaya Shankar is from the Thiruvizha village.

The temple opens at 5 am. On opening the temple the abhisheka (anointing - sacred bathing) of the deity represented by the Linga is done. Abhisheka is done with water, tender coconut water, milk, curd etc. The milk abhisheka is done for 1001 times which is a specialty of this temple. After the abhisheka the idol is adorned with the sacred ash and sandalwood paste. Thereafter Pori (puffed rice) is offered to the Lord. Around 8.15 am the pantheeradi pooja is done. On completion of the pantheeradi pooja the priest reads the names of the devotees who have registered for the medicated prasadam to be consumed. About 100 ml of the prasadam milk is given to the devotees whose names were read and those devotees take the prasadam in presence of the deity. The belief of the local people here is that the Lord Siva takes the poison as he did during the churning of the milky ocean when the Serpent king Vasuki vomited the halahala visha (kaalakoota visha - a highly strong poison). This prasadam is the Neivedyam to the lord and this is distributed as the prasadam to the registered devotees.

The main prasadam of the temple is the milk which is having the poisonous extract of a plant in the temple complex. This extract is having medicinal properties. Proper intake of this prasadam is believed to cure many types of mental problems (insanity or madness), leprosy, serous swellings of limbs (dropsy) and invigorate/energize of the body and soul. People suffering under the influence of Kai visham (taking food prepared to harm by evil spirited persons), alchemy/black magic, witchcraft (mantravada) or evil spirits get relieved of these effects after taking the prasadam of Thiruvizha Mahadevan (Sivan) temple. The prasadam is a purgative drink which brings out the poisonous contents of the stomach by vomiting/puking. The devotees who are taking the prasadam are to abstain from base sensual pleasures like the avoidance of alcohol, non vegetarian food and sex for a week. They should keep their mind and body in pure condition.

This temple is very famous one as the devotees believe that the worship and taking prasadam in this temple will give relief to some mental sickness (madness - insanity), to people under influence of bad spirits or evil effects, mantravadam and black magic/alchemy effects etc. The prasadam of this temple is also believed to cure skin diseases like leprosy, edema etc. This is an ancient temple believed to possess special powers to cure the ill effects of black magic or evil spirits. The Prasadam of the temple is having curable properties on some skin diseases.

The Cochin International Airport, located at a distance of 75 kiolmetres is the nearest airport to Allepey. The Alleppey Railway Station lies within the city limits and is well connected by rail to Cochin and Trivandrum. Kerala State Run Transport Corporation buses connect Alleppey to most major cities in Kerala.