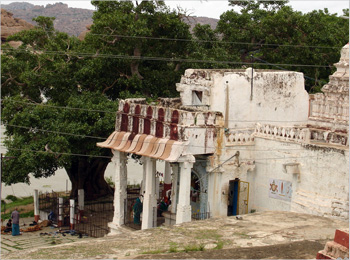 
The Kodanadaramaswami Temple is situated to the east of Hampi. It faces Chakratirthaa, the most sacred bathing ghat of Tungabhadra River. The temple deity is called Kodandarama, as Lord Rama and his brother Lakshman are depicted holding arrows. The temple was constructed in three stages, with its garbhagriha and sukhanasi structures made in the Hoysala style. The remaining portions are made in the Dravidian style. 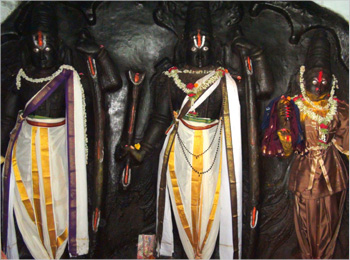 The temple has Dravidian and Hoysala styles of architecture. The present navaranga belongs to 14th century. The mukhamandapa is of the 16th century. The outer walls of the garbhagriha and vestibule are raised on a square basement that consists of six cornices. Navaranga and mukhamandapa have outer walls that are built with brick and mortar. Rama and Lakshmana are shown carrying arrows in their right hands and strung bows in their left hands. It is also believed that the murthi in this temple is a svayambu (naturally formed murthi). The idols do not appear to be of Hoysala period. In the temple enclosure there are small shrines that consist of images of Yoganarasimha, Sugriva, Kalinga, Mardhana, Ramanujacharya, Madhvacharya, Vedanta Desika and some alvars. The outer-walls of the garbhagrha and sukansi have plasters and turrets as well as two rows of figures that represent Lord Vishnu and his incarnations such as Hayagriva, Narasimha, Lakshminarayana, Venugopala, Kalinga-Mardana and Govardhanadhari. Images of Goddess Lakshmi, Lord Hanuman, Garuda and Lord Ganeshare also depicted.


Legend goes that Purushottama was suppressed at Hiremagalur by Rama. He asked Rama to show him his marriage scene. Sita stands in the right of Rama and Lakshmana to his left. According to other local myths, this is the place where Rama killed Vali and crowned Sugriva. Another account says that the place was the residence of nine siddhas who performed penance near a pond in the village known as Siddha Pushkarni. Parashuramaalso lived there, it was called Bhargavapuri.


The nearest Airport is at Hubli. International Airport is at Bangalore. The nearest railway station is at Hospet. People travelling from North/South India can alight at Raichur as well. Hampi is well connected by road and there are frequent KSRTC Bus services from all over the State to Hospet and Bellary.