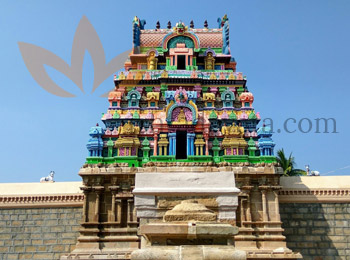 The temple is believed to be built during the Chola period and has several inscriptions dating back to the 8-9th century. The presiding deity, Someswarar is revered in the 7th century Tamil Saiva canonical work, the Tevaram, written by Tamil saint poets known as the nayanars and classified as Paadal Petra Sthalam.

While sculptures at the entrance showing warriors on horseback are damaged, we are left with some beautiful sculptures like Ravana lifting Kailasa Giri, Ganesa and Shanmukha in the front mandapa. The Somanathar temple resembles the Vikrama Choleeswaram temple at Tirukatchi, the Airavateshwarar temple at Darasuram, and Tribhuvaneswaram at Tribhuvanam.

It is dated as a monument initiated by Vikrama Cholan and completed by Rajaraja II (1130 - 1160. Its outer wall has the remains of a 7 tiered gopuram along the likes of those at Chidambaram and Tiruvarur.

The gopura vasal, in two tiers, resembles that at Tiruvarur. The dance panels depicting the Bharatnatyam Karanas, on the wall faces of the entrance, bear the same architectural and iconic features as are noticed at Chidambaram, Darasuram and Tribhuvanam.

Its inner prakaram encloses an area of about 50000 sq. ft., and it has a Tiruchurrumaligai. Interestingly, Ardhanareeswara occupies the rear niche of the sanctum, as opposed to Lingodbhavar. The ratha (chariot) mandapam in front of the Somanathar temple is chariot shaped and the life like images of horses and elephants pulling these are of great beauty. The vast Somanathar temple is thus a veritable art gallery with several interesting features added over a period of time.

The 3-tier Vimanam over the Sanctum carries images of Umasahitha and Gajasamharamurthi. Narasimha murthi is beautifully carved near the footsteps of Ambal Sannadhi. Inner Mandapam presents the image of Mangayarkarasi who was instrumental in bringing Sambandar to Madurai for the purpose of saving Saivism.

The temple has a gopuram (gateway tower) in dilapidated state. The gopuram is believed to have been constructed during the latter part of 12th -13th century by Later Cholas. The second precinct has a two-tiered gopuram. The sanctum and the walls around the sanctum are built in granite and the structure houses the shrine of Someswarar in the form of lingam (aniconic form of Shiva).

There is a shrine for his consort Someswari and the Navagrahas. The scene of Ravana lifting Mount Kailash is carved in this temple. There is a sculpture of Narasimha, an avatar of Vishnu, believed to be made during the Chola period.

The first of the two shows the fight between the eight-handed Narasimha and Hiranyakashipu. The other panel depicts the earlier scene where Prahalada prays and Narasimha emerges from a pillar. The other panel shows Narasimha tearing the insides of the demon thrown in his legs.

The scene of Ravaneswara holding Kailasanathar in his hands is beautifully carved in this temple. Goddess Durga here is also very famous. The idols of Sri Kailasanathar and Mother Durga in the great hall (Mahamandapam) are very beautiful. The presiding deity is Swayambumurthy in the temple. The temple is in the shape of a Rath-car. Garuda the vehicle of Lord Vishnu and Adisesha the snake bed of Lord Vishnu worshipped in this temple. The Shrine of Goddess is in the outer corridor (prakara) of the temple facing south.

Sage Tirunavukkarasar observed fast in the temple. There are just a few houses in the place almost in a dilapidated condition. The monument of Sri Sivaprakasa Swamigal is here. The temple is praised by Saint Arunagirinathar in his Thirupugazh hymns.

As per Hindu legend, Chandra (moon god) is believed to have worshipped Shiva in the place and Shiva appeared for him. Lord Chandran had worshiped here for the relief of Kayarokam. Moon (Chandra) prayed here to get back his radiance called Kalai day by day and for remedy from breathing troubles.

As per another legend, Garuda, the eagle vehicle of Lord Vishnu got a nectar pot from Devendra and passed through this place to free his mother from slavery. He was intercepted by some demons when three drops of nectar fell on this place. The three drops became a Shivalinga, Mother Goddess and a holy spring. Garuda bathed in the spring and won. A holy spring made by Garuda individually is called Jadayu theertham.

Adiseshan had worshiped the Lord here.

It is said to be that Appar had sat here in fasting to attain the Lord’s boon when he came from Samanam.

The city of Pazhayarai was one of the capital towns of the Chola Empire. The temple is a part of the series of temples built by Aditya Chola (871-907 CE) along the banks of river Cauvery to commemorate his victory in the Thiruppurambiyam battle. The temple is revered by the verses of the 7-8th-century saint poets Appar, Sambandar and Sundarar in Tevaram and classified as Paadal Petra Sthalam.

This temple is in the center of the once famous Pazhayarai city, surrounded by Pazhayarai Vadathali in the north, Arai Metrali in the west and Thenthali in the south. This is the birthplace of Mangayarkarasiyar, a saint amongst the 63 Nayanmars.

Somanatha Swamy Temple was sung by Appar, Thirugnana Sampanthar, Sundarar and Sekkizhar. This town was also a capital for few years during later Cholas. Sundara Chola who is the father of Great Raja Raja Chola ruled Chola Dynasty from Pazhayarai. Pazhayarai was also called as “Nandipuram” and “Mudi Konda Cholapuram”. “Amar Needhi Nayanar” one among the 63 Nayanars lived in this place.

As per the paintings inside the temple it is mentioned that Raja Raja Chola was grown up in Pazhayarai and he visited this temple every day when he was young.

Poornima in Aipasi (October-November), Tirukarthikai in November-December, Margazhi Tiruvadhirai in December-January and Mahashivarathri in February-March are the festivals celebrated in the temple.

Devotees pray for happy conclusions of marriage alliances, excellence in arts and remedy from illness.

The Nearest Airport is located at Trichy.

The Darasuram railway station is located close to the temple. The place can be reached from Muzhayur on the Kumbakonam-Aavur route.