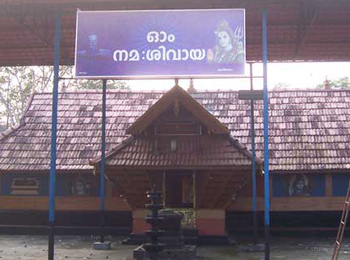 The Someswara Mahadeva Temple is situated close to Thiruvilwamala, in the Thrissur District of Kerala, India. The temple is primarily dedicated to Lord Shiva and is considered one among the 108 Siva temples in Kerala.

According to legends, the Pancha Pandavas are believed to have visited this place to perform the funeral rites for their deceased relatives who had died in the Mahabharata war. They also named the nearby river Bharathapuzha. They had created a few statues of Gods in this river bank for offering worship.

The Pandavas are said to have crossed the Punarjani caves in the south-eastern part of this temple (Indebtedness to Nalangal Krishnappilla). The Linga of the chief deity Lord Someshwara is found within a circular sanctum sanctorum. Lord Ganapathy is seen gracing from within the temple, while the she in of Sri Ayyappa and the Nagas are found outside the temple.

‘Thiruvathira’ and ‘Maha Sivarathri’ are the two important festivals celebrated in the Malayalam months of Dhanu and Kumbham respectively. The number of devotee visiting this shrine has increased ever since its reconstruction. The temple comes under the control of the Parakkottukavu Devaswam, which in turn falls under the Cochin Devaswam Board. Musical instruments are used very rarely in this temple, where ‘Nivedyapooja’ is performed twice everyday. The temple has no stable flag-mast. ‘Seeveli’, a customary temple ritual is also performed here everyday. The current priest in this temple is Sri Venkittaraman Embranthiri whose ancestors were the former priests of this temple.

Poojas are offered 5 times a day for the deity. Seevali is also conducted thrice everyday.

How To Reach Thrissur

The nearest airport to the district of Thrissur is the Kochi Airport.

Regular trains are available to Thrissur from many major cities of India.

Frequent and regular bus services are available from major cities of the country to Thrissur.