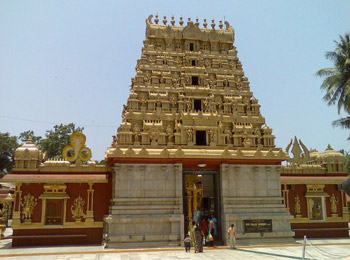 Halasuru Someshwara Temple is located in the suburb of Halasuru (also called Ulsoor) in Bangalore, India. The oldest temple in the city dating back to the Chola period, it is dedicated to the Hindu god Shiva.[1] Major additions or modifications were made during the late Vijayanagara Empire period under the rule of Hiriya Kempe Gowda II. 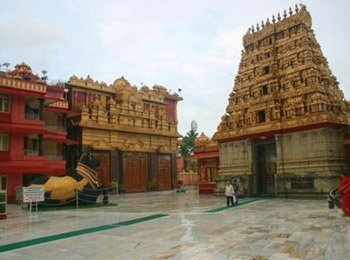 According to Michell, the temple plan follows many of the basic elements of Vijayanagara architecture though at a lower scale. The temple has a square sanctum (garbhagriha) which is surrounded by a narrow passageway. The sanctum is connected to a closed mantapa (hall) whose walls are decorated with pilasters and sculptures in frieze. The closed mantapa is connected to a spacious open mantapa comsisting of four large projecting "bays" (area between four pillars). The piers leading to the sanctum and those facing outward from the open mantapa are the standard Yali (mythical beast) pillars. The eastern gopuram is a well-executed, typical 16th century structure. There are several notable sculptures and decorative features in the complex. An impressive pillar (kambha or nandi) pillar) stands near the tall tower over the entrance gate (gopura). The tower itself exhibits well sculptured images of gods and goddesses from Hindu mythology. The open mantapa consists of forty eight pillars with carvings of divinities in frieze. To the north is the navagraha temple (shrine for the nine planets) with twelve pillars, each pillar representing a saint (rishi). The entrance to the sanctum exhibits sculptures of two "door keepers" (dvarapalakas). Other notable works of art include sculptures that depict King Ravana lifting Mount Kailash in a bid to appease the god Shiva, Durga slaying Mahishasura (a demon), images of the Nayanmar saints (Tamil Shaivaite saints), depictions of the Girija Kalyana (marriage of Parvati to the god Shiva), the saptarishis (seven sages of Hindu lore).[2] Recent excavations at the temple site has revealed the existence of a temple tank (kalyani) which could be 1200 years old. 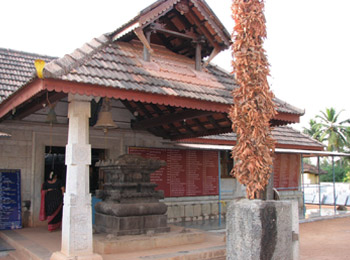 In the "Gazetter of Mysore" (1887), Benjamin Lewis Rice describes a legend behind the consecration of the temple. Kempe Gowda, while on a hunt, rode far away from his capital Yalahanka. Being tired, he rested under a tree and fell asleep. The local deity Someshwara appeared to him in a dream and instructed him to build a temple in his honor using buried treasure. In return the chieftain would receive divine favor. Kempe Gowda found the treasure and dutifully completed the temple. According to a different version of the legend, King Jayappa Gowda (1420-1450 CE) from a minor dynasty of the Yelahanka Nada Prabhus was hunting in a forest near the present Halasuru area, when he felt tired and relaxed under a tree. In a dream, a man appeared before him and told him that a linga (universal symbol of the god Shiva) was buried under the spot he was sleeping. He was instructed to retrieve it and build a temple. Jayappa found the treasure and initially built the temple out of wood. Another account attributes the temple to the Chola Dynasty with later renovations made by the Yelahanka Nada Prabhus. 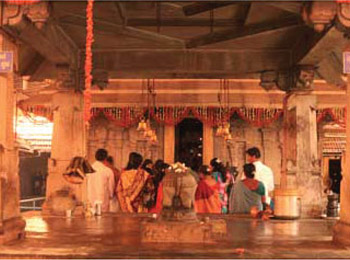 Celebrated every year on Month of February in the Krishna Paksha (waning moon) of the month of Maagha (as per Shalivahana) or Phalguna (as per Vikrama) in the Hindu Calendar (that is, the night before and day of the new moon). 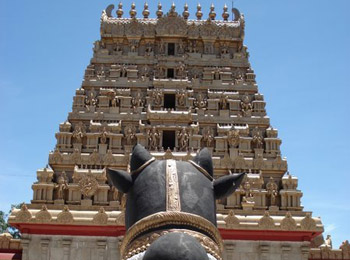 Occurs once in every 15 days and considered most auspicious by Shaivites, it occurs almost 2 days before either Amavasya (black moonday) or Pournima (full moon day).

The international airport at Bangalore connects the city to other major cities within and outside the country.

There are local buses, taxis and auto-rickshaws that can be hired to reach the temple from any part of Bangalore. It’s around 7 km from Bangalore Kempe gowda bus stop.

The closing time of the temple is extended during Shivratri and other festivals – also during Temple Festival.