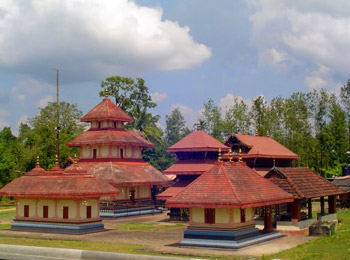 
Pulpalli Sita Devi Temple, also known as Sri Pulpalli Sita Lava Kusa Temple, in Wayanad District, Kerala is one of the rarest temples of Kerala and the country - dedicated to Sita Devi and the sons of Lord Rama and Sita Devi, Lava and Kusa. The etymological meaning of Sita denotes soil. Situated in the eastern end of Wayanad District, Pulpalli town is about 25 km from Sultan Battery and 18 km from Minangadi on the Calicut Mysore National Highway. Devotees come to this temple not only to worship Sita Devi and the young princes, but also partake of the special events that are conducted here annually.


Pulpalli Sita Devi Temple is one of the rare temples in India because one will not come across temples with Lava and Kusa as the main deities usually. Other deities apart from the main deity of Goddess Sita are those of Lord Ayyappa, Lord Subramanya, Lord Ganesha, Lord Thalachiluan, Lord Vettaikaran and Lord Naga or the serpent. The idols of Lava and Kusa are installed in a single sanctum sanctorum in the temple. The temple pond is one of the largest found in Wayanad. People of all faiths can visit the temple.


Mythology tells that Sage Valmiki, the author of the epic Ramayana, lived in the south-western part of Pulpalli in Kolli Ashram. Sita sought refuge in this abode when she was exiled by Lord Rama. Towards the end of Ramayana, we see that Sita Devi calls for her mother, Bhuma Devi or Mother Earth to take her within the confines of her bosom when Lord Rama comes to her. The earth split with Sita Devi entering the depths of the earth. Nothing is left of her except one matted lock of hair on the ground. The tears that flowed from Sita’s eyes formed a river which is known as Kannaram Puzha. The Sita Devi idol in Pulpalli Sita Devi Temple is also known as Jadayatha Amma, meaning ‘the Mother who lost her matted lock’.

This is a prominent festival conducted in Pulpalli Sita Devi Temple. It is the celebration of the birthday of Lord Krishna on the ashtami (eight) rohini day during the Kerala month of Chingam.

A one-day visit to all the temples connected with Goddess Sita Devi is organized.


Pulpalli can be accessed from Mananthavady or Sultan Battery. The road from Nilambur to Ooty is connected to Wayanad through the village of Meppadi.