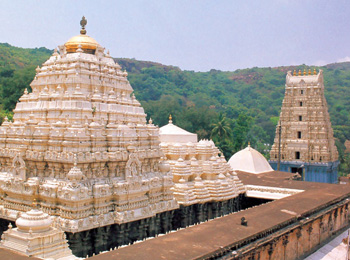 The Sri Simhachalam Temple, in Visakhapatnam is the home the Varaha Narasimha Swami, and henceforth the slope itself is called (nara) simhachalam. It is one of the nine 'Naarasimha Kshetras' i.e. hallowed places of God Narasimha in India. 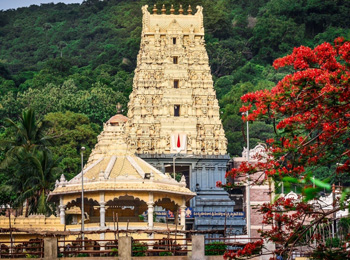 The Temple has Sri Varahalakshmi Narasimha Swamy as the directing god. The divinity at Simhachalam, the lion-man incarnation of God Mahavishnu is typically secured with sandalwood glue. The first state of the divinity in the tribhanga stance has two hands with the leader of a lion on a human middle. An engraving dated as far back as 1098 AD of the Chola lord Kuloththunga gives some piece of information as to its artifact. Another engraving demonstrates a Queen of the Eastern Ganga of Kalinga(ancient Orissa) (1137-56 AD) covering the picture with gold while a third engraving says the eastern Ganga King of Orissa Narasimha Deva constructed the primary/focal temple in 1267 A.D. With more than 252 engravings in Oriya and Telugu depicting the temple's predecessors, it is a truly essential landmark. Sri Krishna Deva Raya in the wake of overcoming the Gajapati leader of Orissa Gajapati Prataparudra Dev went by the hallowed place twice in 1516 AD and 1519 AD and offered various towns for support of bhogam (love) alongside important gems of which an emerald neckband is still in the temple.

Throughout the previous three centuries the Royal group of Vizianagaram, The Pusapati Gajapathi's have been the temple's trustees. A large number of enthusiasts from round the world visit this temple consistently. The managing divinity here is Varaha Lakshminarasimha, joining the iconographic components of Varaha and Narasimha. The picture looks like a Shivalingam secured with shoe glue. It is just once every year, amid the Chandana Visarjana that the shoe glue is uprooted, and the picture is seen by pioneers. The fine art here has components of likeness with that of Konark. Elephants, blossoms and plants are depicted in bounty. The external dividers of the sanctum delineate pictures of an illustrious identity (said to be King Narasimha) in different stances. The Kalyana Mandapa inside of the temple has 16 columns with bas help delineating the incarnations of Vishnu. Giripradhikshana around the slope extend 40 km from Hanumantha vaka/MVP province to Simhachalam is finished by piligrims amid the favorable days. Hordes of elderly individuals/th/youngsters are watched strolling the 40 km extend overnight. They visit the temple after the long adventure and give their offerings to the god. 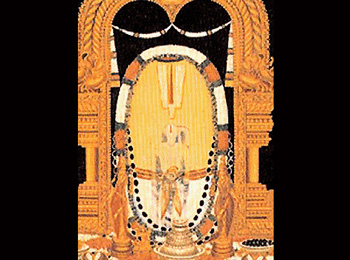 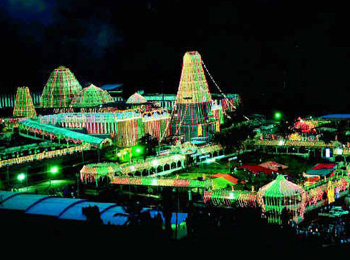 Hiranyakasipu was a Rakshasa lord. He was indeed one of Vishnu's Dwarapalakas or guardians in Vaikuntha, Jaya and Vijaya. They needed to take conception in the mortal world thrice due to a condemnation given by Sanaka, Sanandana, Sanathana and Sanathkumara, who were not permitted to take darshan of Mahavishnu by them. The other palaka was conceived as his sibling Hiranyaaksha. Hiranyakasipu needed to end up unfading and subsequently performed starknesses (tapasya) to appease God Brahma. Nonetheless, God Brahma said that was impractical so Hiranyakasipu requested that God Brahma award him a shelter so that he couldn't be murdered by any creature or a man neither in the morning nor in the night, by any weapons, neither in sky nor on the earth.

Hiranyakasipu needed the whole world to worship him. Be that as it may, Prahalada, his child, was an enthusiast of God Narayana and constantly communicated his bhakti towards Him. Despite notice him a few times, Hiranyakasipu couldn't adjust Prahlada's dedication. This made Hiranyakasipu furious and he made various endeavors to get Prahlada executed. One of them was to divert him from the highest point of a mountain. In any case, Vishnu protected him by moving the mountain and made a little way for Prahaladha. It is said that in the spot where the God remained to ensure Prahaladha is the spot where the temple is assembled. The most imperative thing about this temple is that here we can't see the God's feet. It is said that the feet is covered inside the earth. God Narayana acted the hero Parahalada on Garuda and when they tossed Parahalada God Narayana bounced from Garuda to spare him and in this procedure his feet dove deep into the earth.

There is a Trekking course accessible for trekking mates from Madhavadhara side, two hours moving to temple premises with steep characteristic stone steps and an excellent perspective of Vizag city and at the other side the temple view from slope top.

Festivals celebrated at the Simhalchalam Temple

CHANDANOTSAVAM: The main festival celebrated in Simhalchalam Temple is on akshaya thritheeya which is the 3rd day of Vaisakhamasam (usually during the month of April or May). Although throughout the year, the deity is covered in sandal paste preperation, on this day, the sandal wood paste is removed from the deity in a ceremony call Chandanayatra or Chandanotsavam. The devotees can then witness the Nija roopa darsanam (darshan without the chandan layer) of the Swamy. Over 1 lakh devotees visit the temple on this day to celebrate the festival.
UGAADHI (TELUGU NEW YEAR): The Pandhiri raata utsavam is celebrated at the temple and Sri Swamy is dressed as the bridegroom (Chaitra Suddha Padyami)
NARASIMHA JAYANTHI: The Narasimha Jayanthi festival occurs on the 14th day of the 1st half of month of ‘Vaisakha’ and is celebrated as Birthday of the Lord Narasimha.
RADHOTSHAVAM: This is a festival celebrated at the temple before the God gets married.
KALYANOTHSAVAM: Sri Swamy vari Vaarshika Thirukalyana Mahothsavam (From Chaitra Sudda Dasami to Chaitrasudda Pournami) (march/april).
VAISAKHA POURNAMI: This is the 2nd phase of Chandana Samarpana and is one of the most auspicious days at the temple.
JYESTA POURNAMI: This is the 3rd and final phase of Chandana Samarpana and is celebrated early in the morning.
TEPPOTSAVAM: Teppotsavam is celebrated on Pushya Bahula Amavasya and on this day, the ‘Utsava idols’ are taken in a palanquin from the temple to 'Varaha Pushkarini'. The delotees get to have a look at the Lord and the procession begins on the hill at 3 p.m. and reaches the foot of the hill around 4.30 p.m.
KANUMA: This day is celebrated by bringing the deity downhill to the garden for darshan and a fair is organized. The temple administration organizes this fair near the lake and scenes from Bhagwat Gita’ ‘Gajendra Moksha’ episode are enacted by the priests. The idols are then taken to Sri Pydithalli Ammavari temple.
VYKUNTA EKADASI: On this day, the Lord Narasimha Swamy attracts the devotees on vykunta dwaram and is celebrated on Dhanusudda Ekadasi.
GIRI PRADHAKSHINA: Generally, Giri Pradhakshina is celebrated in the month of June or July on “Aashada Pournami”. The devotees fast on this full moon day and walk around the Simhalchalam hill which is a stretch of 34kms. Only after the darshan and the Pradakshina do they break their fast and eat dinner. Alternatively, devotees may also circle 180 times around the temple if they find the 34km trek too tiring.


Hotels in Vizag: Where to stay

Several cottages are available for devotees to stay in at the top of the hill, such as A.P.T.D.C. Chandana Tourist rest house, Temple Cottage and Tirumala Tirupati Devastanam Cottages. Apart from these cottages, there are several hotels and other accommodation options available down the hill in the city of Visakhapatnam.

In 1989, the Dharamakartha, Dr. P.V.G.Raju Garu introduced the Nityannadanam Scheme under which close to 1500-2000 devotees are served the Annaprasadam every day. This count has recently increased to 5000 devotees and the temple is welcoming more people. Apart from the meal at the temple, there are options available at eateries around the temple at the hill.

The temple is just 18 kilometres away from Visakapattanam. The nearest airport is at Vishakhapatnam, which is well connected with flights from major cities. The nearest railway station is Vishakhapatnam Railway Station. From Chennai - Calcutta lane, it is around 20-kms, and is well connected with trains to all important destinations in A.P. and India viz. New Delhi, Mumbai, Calcutta, Chennai, Hyderabad, Bangalore, Bhubaneswar etc. There are frequent buses operated between Vizag and Simhachalam and the main bus stand is at Vishakhapatnam. APSRTC operates buses to all important towns/cities in Andhra Pradhesh like, Hyderabad, Vijayawada, Rajahmundry, Tirupati and so on. There is bus facility from the foot of the hill to the temple for every 10 to 15-minutes.