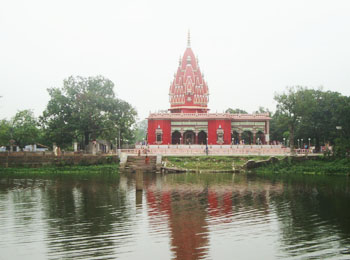 This temple is located near Lalit Narayana Mithila University. The deity of Goddess Kali is created of a 10 feet tall black stone and is enshrined above the grave of Rameshwar Singh. The deity depicts the Goddess wearing a green silk sari and crown while standing on God Shiva who is in a calm position. The deity depicts God Shiva in the form of Sadashiva while Goddess Shhyama can be seen with a snake wrapped like a sacred thread around her body. There is another deity in which God Shiva is standing in the form of Mahakal on the right side of Goddess Ma Shyama’s deity. The deities of God Kartik and God Ganesha are kept in front of this deity as it is believed that it will soothe God Shiva’s anger. Another shine consists of God Vishnu’s deity and prayers are held every morning in the temple. The prayers begin with the sound of shells while two priests/devotees ring a huge bell in the temple. This bell was gifted by a King of Nepal and is only rung twice in the day during the prayers.

The structure of the temple consists of a verandah called Jagmohana in front of the sanctum which represents the universe. The ceiling of the Jagamohana consists of different signs that are used in tantra sadhna to create a positive energy in the shrine. The deity of Goddess Ma Shyama was enshrined by a priest called Sitaram Jha Vyas who not only participated in ritual with King of Darbhanga but also specialized in rituals related to tantra sadhna.

How to Reach Darbhanga

The Lok Nayak Jayaprakash Airport located at Patna is nearest to the temple as it is only 3 hours away from Darbhanga. This Airport is well connected to all the other major cities of India.

The Darbhanga Railway Station is nearest to the temple and it is well connected to other major cities of the country.

Frequent bus transport is available to reach the temple. The town of Darbhanga is well connected to other cities.

The temple opens from 4am to 1pm in the morning and from 3pm to 11pm in the evening.