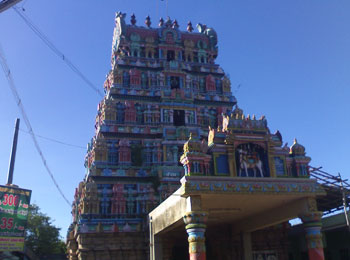 The temple dedicated to one of the navagrahas ,Shukran, is located in Kanjanur . Shiva blessed Paraasara muni with a vision of his Mukti tandavam - cosmic dance - here. Kanjanur is the sthalam for Sukran. It is at this place that God Vishnu was eased of the curse of Sukracharaya when severe penance to God Shiva. God Vishnu had blinded Sukracharaya in one eye who had tried to clear the blockage in the kamandalam, which Sukracharaya had created. This incident had happened when Mahabali chakravarthi was in the process of giving three steps of land to Lord Vishnu, who had come in the form of Vamana . Brahma is said to have been blessed with a vision of Lord Shiva's wedding with Parvati here.

The temple was built during the reign of Medieval Cholas and later renovated by the Vijayanagar kings. The temple has a 5-tier rajagopuram. It has two prakarams (closed precincts of a temple). This is a Padal petra stalam. One of the samaya kuravars, Thirunavukarasar, fondly known as Appar, has sung padigams on the deity of this temple. This Shiva Sthalam is associated with the Shukran. Brahma is said to have been blessed with a vision of Lord Shiva's marriage with Parvathi. This shrine is also known in the names of Palaasavanam, Bhrammapuri and Agnistalam. Kanjanur is considered to be the 36th in the series of the Tevara Stalams located in Chola Nadu north of the river Cauvery.

Agni is said to have worshiped Shiva here, hence the name Agneeswarar. Shukran is known as the God of pleasure and we need his grace to enjoy and derive pleasure from life. There are many Lingas in the prahara including one worshipped by Kamsa.

The sthala theertams are Agni Theertham and Parasara Theertham.

Agnishwarar is the main deity in this temple, is in the form of a lingam worshiped by Shukran. He is accompanied by Goddess Karpagambigai. The temple towards east has separate Celebration mandapam, Decorative mandapam, Vahanamandapam and Sixteen Foot mandapam with three praharams.

There is a place to devote Lord Shiva who has a separate Sannathi with Goddess Parvathi, in the south of the Agneeshwara Swami Sannathi,. Lord Shiva, is also knwon as "Mathisoodumperuman" . He helps his devotees to get rid of ShukraDosha.

Near the Rajagopuram, towards south, there is the sannidhi of Karpaga Vinayagar temple . Haratattar temple is positioned towards east in Sannathi Street. This temple is surrounded on all four sides by four rathaveethi's with ChandiraTheertha, ParaasaraTheertha and Agni Theertha along with Brahma Theertha popularly known as Cauvery.

The sthala vriksha is Porasu tree. Going round the tree 16 times in a day is believed to get one free from debts.

The Kanjanur temple is one of the nine Navagraha Sthalas that resides in the Cauvery Delta. The abode is dedicated to the planet Lord Shukran.

Shukra is the teacher of the demons popularly known as asura guru and the author of Sukraniti. He is shown with four hands, riding upon a chariot made of gold or silver and drawn by eight horses. In three of his hands he holds a staff, a rosary, a vessel of gold respectively while the fourth one is held in varada mudra. Here, God Shiva represent of Shukra Bhagavan. Legend is that with this power Sukracharya once brought the dead asuras alive during a war against the Devas, with the helop of Sanjeevani mantra. The devas prayed God Shiva to come to their rescue. The God then swallowed him in anger. Sukra meditated upon Shiva in his stomach and emerged out.

Another legend associated with Sukra is that God Vishnu in his Vamana Avatar asked for three footsteps of land from the asura King Mahabali. The asura Guru realizing the boy as God took the form of a bee. He blocked the flow of water from the kamandalam which marks the end of the offering. But Vamana an incarnation of Vishnu, picked up a pavithram and blinded Sukracharya in one of his eyes while in the process of remove the block (bee) from the hole in the kamandalam.

The devotees often visit the temple to get blessing and seek fulfilment of procurement of new house, vehicle, and to be bestowed by happiness. The sthala vriksha is Porasu tree. Going round the tree 16 times in a day is believed to get one free from debts.

How to get there or Accessibility:

The nearest airport which is Trichy airport is at 105 kms from Kanjanoor.

The nearest railway station to Kanjanoor is at Thanjavur which is around 25km from the city.

The greatest historical significance of Sukran is its relevance in the field of jyotishi or Indian astrolology. Sukran is believed to be one of the grahas or the planet namely Venus. Astrological scholars claim that it is a feminine planet ruling the south east direction. It is made up of the element Kaf i.e water.

Horiscopists consider Shukracharya as the lord of those having the moon signs Taurus and Libra.

Beauty, prosperity, happiness, love, and appealing endowments of clothes and jewellery are regarded as the blessings of Sukran in benevolent times. If angered history claims Sukran strikes back with stomach ailments, throat diseases, sexual disorders, family problems, demonic possession etc. Local beliefs are that 1600 recitations of the mantra ' Om Shum Shukray Namah' are the healing words to eliminate the negative effects. Parvathy worship in the Kanjanoor Temple on a Friday is another popular remedy for the same.

As he is envisioned sitting on a white lotus in his saintly form Sukran is associated with the color white. He also correlated to the gem diamond and the metal silver. Materials like clothes, sugar, curd etc. in white or naturally existing in white color are believed to be favorable to him. Cow worship is also supposed to calm him. Sukran is also depicted by some as seated on a white horse.

The most impressionable festival celebrated in the region is at 18 kilometers away from Kanjanoor, in Kumbhakonam situated to the North of Kaveri River in Tamil Nadu. It is celebrated once in 12 years at the Mahamaham Tank which is a holy tank spread across six acres comprising of 21 wells and flanked by 16 small temples.

a. Temple Guest House: Not Available
b. Other Nearby Hotels:
Sri Balaji Hotel