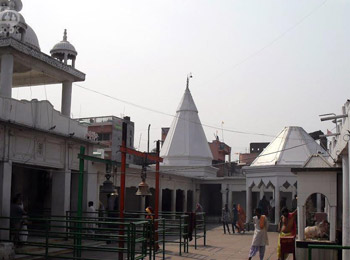 
Singheshwar is one of the administrative divisions of the Madhepura district in the Indian state of Bihar. The block headquarters are located at a distance of 6 km from the district headquarters, namely, Madhepura. There's a temple of Lord Shiva. Devotees come from many places for puja. In month of Saavan Singheshwar is jam packed by people. People from Nepal also come for puja.


The Shiva temple at Singheswar, also called Singheshwarsthan, has religious significance since ancient times, as this land was the meditation place of Rishi Shringi. Hence, this place is considered to be the most pious for Hindus. During the Ramayana, a Putreshthee Yajna was performed by Raja Dashratha and he was blessed with four sons from the prasad “Charu” of that mahayajna. Eventually the residence place of Sringi Rishi became famous as Singheshwar. It is visited by lakhs of pilgrims. Sundays and Mondays are very important for the devotees. Mahashivratri Mela (which is one of the Rajkiya Mela of Bihar) of Singheshwarasthan is famous. A reference to Singheshwarasthan has been found in the Varaha Purana. The mythological story behind this place is that Goddess Maha Kali, Maha Laxmi and Maha Sarswati are assimilated into the form Goddess Durga and she being lion rider is called Singheshwari. Her counterpart Lord Brahma. Vishnu and Mahakal Shankar are assimilated into the form of eternal god is called Singheshwar. Three part of the Shivling is the expression of Trimurti. It is said that pundit Mandan Mishra was residing and a scholarly debate on religion was held between Mandan Mishra and Adi Sankaryacharya. After that debate Pt. Mandan Mishra adopted the cult sanatan. Lord Buddha’s statue of Avalokiteshwara on the southern wall of the eastern-sided temple shows the acceptance of Lord Shiva’s eternal Omnipresence.

The nearest airport is the Netaji Subhas Chandra Bose Airport. The closest railways are in the Bhaktiyarpur Junction. Bus is one of the ways to reach Ranchi from Bhubaneswar. The travel time from Bhubaneswar to Ranchi is approximately 12 hours.