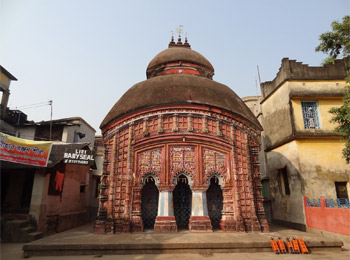 Dhamodhar Temple is a Vishnu temple located at Rajbhalhat. Rajbhalhat is a village situated in Srirampore Subdivision of Hooghly district in West Bengal. In the 16th century, Rajbhalhat was the bustling capital of Bhursut dynasty's empire. The 16th century temple housing the idol of Devi Rajbhallavi, after whom Rajbhalhat is named, is the prime attraction of the place. The Terracotta work on the walls of the temple is amazing.

This temple was constructed in 1724 AD and it belongs to the rich Shil family. Built in the Hooghly-Burdwan style, this 18th century brick temple is decorated with exquisite terracotta figures and carvings. The temple has 3 entrances. The terracotta on it walls depicts different gods and goddesses, scenes from the royal palace, Ramayana scenes, animals and vegetal motifs. Apart from usual scenes of the Ramayana and Krishna Leela, the terracotta figures also depict social scenes of olden Bengal. The sad part is that the local people, while going through a restoration process had coloured the terracotta panels according to their wish and the original glory of the terracotta art is thus lost to a certain extent.

Local trains are running from Howrah to Haripal station. You can reach Rajbhalhat from there by bus. Rajbhalhat is 22 km from Haripal.

Lying just 40 km to the north of Kolkata, Hooghly is easily accessible by road. Bus services are available to reach Rajbhalhat from Hooghly.