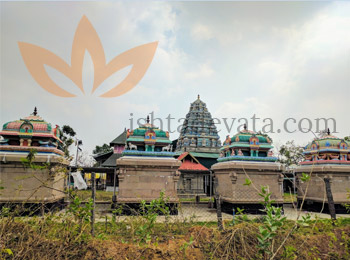 The Mahameru mount made of green stone in the temple is worshipped as Mother Akhilandeswari and a wooden plank as Lord Kameswara and Mother Kameswari. Everyone is interested to know and in the study of the Siddhas who lived in thick forests with high divine powers and unquestionable and unsurpassed medical skill.

They are believed to exist now-a-days too. It is also believed that they rarely appear before enlightened and pure souls.To facilitate worshipping of the Siddhas at one place, a temple for 18 Siddhas is built in Madambakkam near Chennai. A Meru hill made of a green stone is worshipped as Shiva-Shakti. There is a procedure to worship each Siddha each day with such flowers and Vastras-clothing attributed to each Siddha with related neivedhya-food offering.

Mahasivarathri in Masi (February-March), Margazhi Tiruvadhirai in December-January), Panguni Uthiram in March-April and Tirukarthikai in November-December are the festivals celebrated in the temple.

Devotees pray here for various remedies. For release from Pithru Shabas (curses of the ancestors) and adverse aspects of Sun planet (Surya dosha) people pray to Pattinathar and Kaduveli Siddhar on Sundays with Marikolundu and Sampangi flowers and rose clothing on Sundays.

For success in land disputes, delayed marriage and remedy from the adverse aspects of Planet Mars (Sevvai dhosha) devotees pray to Bogar and Pulipani siddhas on Tuesdays with Vilwa, Samandhi, Arali and Jathi flowers and red clothes.

For ill effects of planet Mercury (Budha), people pray to Idaikadar and Vallalar with Jasmine and Vibuthi (sacred ash) and green colour clothes on Wednesdays.

For relief from the adverse effects of planet Jupiter (Guru), devotees pray to Kakapujandar and Agapei Siddhar with Maru, Tusi, Vilwa and Sangu pushpas on Thursdays with yellow clothes.

Kanjamalai Siddha and Chennimalai Siddha are prayed by the devotees for the grace of planet Sukhra (Venus) with Pachilai, Betel leaves, jasmine and lotus flowers with white clothes on Fridays.

Also on Fridays, devotees pray to Sattai Munivar and Kudhambai Siddha with Jathi flowers, Virutchippoo, Vilwa and Tusi with multi colour clothing for relief from the adverse effects of Kethu (dragon’s head).

For relief from serious sins called Brahmmahathi dosha caused by committing murder, rape etc., and adverse aspect of Saturn (Sani Baghwan), devotees pray to Saturn with all kinds of flowers and dark blue cloths on Saturdays.

The nearest Airport is situated at Chennai.

The nearest railway station is situated at Tambaram.