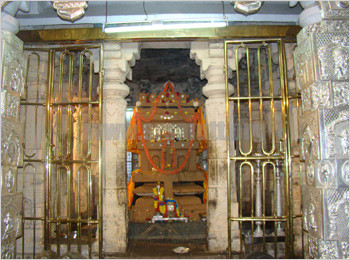 Mantralayam is situated in Kurnool district of Andhra Pradesh in India. Various Buses ply from Madras, Mumbai, Banglore, Hyderabad etc. It is 595 Km from Madras and 690 km from Mumbai and around 360 Km from Hyderabad. It has many tourist facilities for pilgrims to stay. It is situated on the banks of river Thungabadhra. It can also be reached by train. It is on the train route between Mumbai-Madras, Delhi-Bangalore, and Hyderabad-Tirupathi. The station name is "Mantralayam Road", it is 16 Kms from Mantralayam. You can travel to Mantralayam from Mantralayam Road station by private Jeeps, taxis, Autorickshaws or public bus. Approximate cost of travel per person is Rs.50 for private transport and Rs.4 for Public Bus. 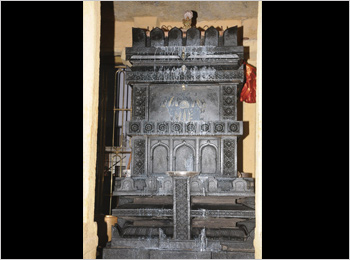 A huge gate stands at the entrance of the temple with few stairs that lead you to the outer prahara (compound) of the main temple. Summer vacations (in the month of April and May), Thursdays, public holidays and on weekends, large number of devotees throng Mantralayam and stand for hours to get the glimpse of the Lord's Brindavan. The place where a great Madhwa saint went into Jeeva Samadhi amidst the presence of huge crowd of devotees in the year 1671 is the abode of Raghavendra Swami.He is also believed to be Vyasaraja who was the Rajaguru (Royal Teacher) of Vijayanagar Empire and then took the form of Guru Raghavendra. 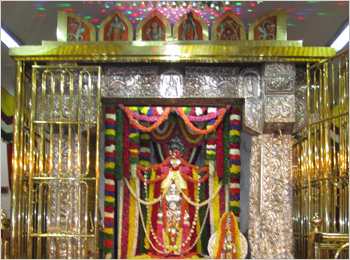 Sri Raghavendra Swami was born as Sri Venkata Natha (Venkata Ramana), the second son of Sri Thimanna Bhatta and Smt. Gopikamba on Thursday, Sukla Navami of Phalguna month in 1595, when the moon was in Mrigash?rsha Nakshatra, at Bhuvanagiri, near present-day Chidambaram in Tamil Nadu. Sri Thimmanna Bhatta was the son of Sri Kanakachala Bhatta and the grandson of Sri Krishna bhatta, a Veena scholar in the court of King Krishnadevaraya. Sri. Thimanna Bhatta and his wife, Smt. Gopikamba had a son, Gururajacharya and a daughter, Venkatamba. Sri Venkanna Bhatta was also called Venkatanatha or Venkatacharya in honor of Sri Venkateshwara at Tirupati, with whose blessings he was considered to have been born, to his parents, for their devotion and diligence towards the deity.

Sri Venkatanatha proved to be a very brilliant scholar from a very young age who learnt to play the Veena very proficiently thanks to his father and grandfather. After his father's demise, Venkatanatha was brought up by his brother Sri Gururaja Bhatta and completed the initial portion of his education under his brother-in-law Lakshminarasimhacharya's guidance in Madurai.

After his return from Madurai in 1614, Sri Venkatanatha married Smt. Saraswathi Bai in the same year and had a son Sri Lakshminarayanacharya. After his marriage, Sri Venkatanatha and his family went to Kumbakonam where he studied the Dwaita vedantha, grammar and literary works under his guru, Sri Sudheendra Theertha. Sri Venkatanatha was already very well versed in bhashyas and consistently prevailed over renowned and reputed scholars, irrespective of the complexity of the debates. He was an ardent devotee of Sri Moola Rama and Sri Panchamukha MukhyaPranaDevaru (the five-faced form of Hanuman - Pancha meaning five, mukha meaning faces). He spent a large part of his Poorvashrama life teaching Sanskrit and the ancient Vedic texts to children. He never demanded any money for his services and endured a life of poverty along with his wife and son. They went without food several times a week. On occasion, his wife did not have change of clothes. This forced her daily change of wear to be dependent on when the clothes dried. She would wear 1/2 the saree, wait for the other 1/2 to dry and wrap it around her. But he was so devoted in his quest for a higher spiritual plane that these obstacles never deterred his faith in the Lord.

The Mutt also has accommodation available at low costs. The Mutt also serves one meal between 11-3 pm (as Prasadam) free everyday (except Ekadasi). However if you would prefer luxurious stay with Cable Tv and other facilities.

The nearest airway is through the Hyderabad - Rajiv Gandhi International Airport (236 Kms), and by rail, the Mantralayam Road Railway Station (15 Kms) is closest. For buses, one may go to the Mantralayam Bus Station (0 Kms)