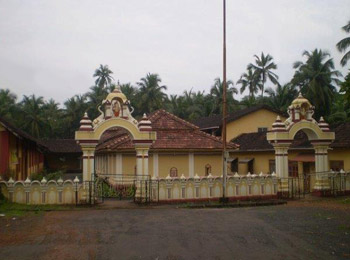 The temple is located in Poinguinim Village in Canacona Region. This temple is dedicated to Parusharam – the sixth reincarnation of Vishnu God, who, according to believes, has created the western sea coast line of Karnataka state.

The temple is located amidst the quiet of the surrounding deep heavy woods. The architecture is a traditional one for this region: carved wooden columns which process mandala (the building at the entrance) and shikara.

According to the legend, Parashuram has got this land from the God of Sea, who promised to give him as much land as he could take by an ax throwing. Thus Parashuram has got Konkan, Kerala and Kanara regions. The legend also tells that Parashuram has really wanted to throw the axe as far away from him as possible, because he killed his native mother with this axe. Although he did such an awful action following the behest of his father, who later returned his wife back to life.

The Dabolim Airport (60km) in Panaji is the nearest airport. Indian Airlines, Jet Airways and Sahara Airlines fly into Panjim several times a day from Bangalore, Bombay and New Delhi.

The sanctuary is about two km from Poinguinim, which is 10 km away from Chaudi, the main town of Cancacona on NH 17. One can hire local transport from Poinguinim to reach this sanctuary.