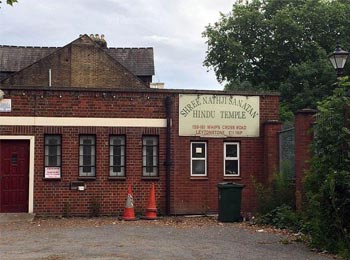 The Shree Sanatan Hindu Mandir is located in London on Ealing Road in Wembley and in Whipps Cross near Leytonstone. They are run by charity Shri Vallabh Nidhi UK. The temples follow Sanatana Dharma, and in common with other temples called Sanatan their intention is to be non-sectarian and ecumenical. 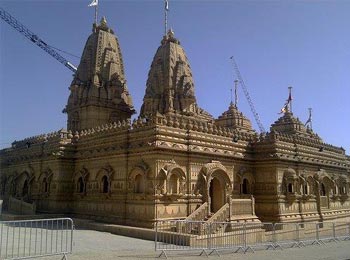 The temple in Leytonstone is called Shri Nathji Mandir and was inaugurated in June 1980. It has the following deities - Shri Ram, Shrinathji, Shiv Parivaar, Amba Mataji, Jalaram Bapa and Hanumanji.

It was opened in the Summer of 2010, took 14 years to build, and is made entirely of imported Indian limestone. It was constructed according to the scriptures of the Hindu holy texts, and so contains no steel supports. Many of the temple's component pieces were hand carved in the town of Sola, in the Indian state of Gujarat - before being flown to Britain and assembled. There were 41 marble statues of deities made in India especially for the mandir. The interior is elaborately decorated with carvings on the pillars and walls, as well as the numerous shrines with painted figures of Hindu deities. Some famous spiritual leaders and forms of Gods from other religions are featured in the carvings, including one of Mother Teresa and the Sikh Guru Nanak. At its highest point, the temple is 66 ft (20m) tall. The temple has the following deities: Shri Ganeshji, Shri Sahajanand Swami, Shri Amba Mataji, Shri Simandhar Swami, Shri Radha Krishna, Shri Ram Darbar, Shri Shrinathji, Shri Tirupati Balaji, Shri Shiv Parivar, Shri Jalaram Bapa, Shri Hanumanji. The temple was built using funds raised by the charity Shri Vallabh Nidhi UK (SVNUK).

How To Reach London

London is well connected to all international destinations by air. Within London, there are several railways and roadway options.