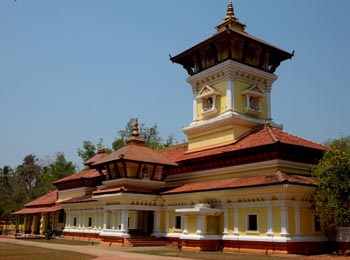 The Shri Dattatreya Temple is located in North Goa. It is also known as the Shri Datta Mandir. The temple is one of the few that remained untouched by the destruction of foreign rulers. It is one of the oldest temples in Goa.

The temple is dedicated to Lord Dattatreya, the combined form of Brahma, Vishnu and Mahesh. These three gods are considered as the holy trinity. These three gods are symbol of preservation, creation and destruction. The architecture of the temple is a combination of the traditional local building and a rigid architectural style. This unique combination has given the temple an exclusive look. The interior of the temple is made of white marbles. The temple possesses intricate carvings and extensive work of craft.

The temple was built in the form of a shrine to keep the idol of Lord Dattareya within safe enclosure. The deity idol is very nice and at the entrance there are statues of Cow (depicting Earth), 4 Dogs (depicting 4 Vedas). The temple location is very picturesque. The main attraction of the temple is not just the deities but also the beautiful natural surroundings, greenery of the palm groves, the beautiful sight of the hillock and the freshness of the surrounding. A trip to the temple offers some panoramic views.

The most important festival celebrated here is the Datta Jayanti which falls in the month of December.

The deity is believed to be very powerful. Devotees have a strong belief that the temple has unique healing powers. People with unsound brain or mental difficulties are said to have been healed through prayers offered to the deity.

The Dabolim Airport lies just 29 kilometres from the state’s capital, Panjim. The two major railheads in Goa are Madgaon and Thivim, which are well connected by trains from all over the country. There are a number of public as well as private bus operators in Goa, which offer options for intra-city and inter-city conveyance.