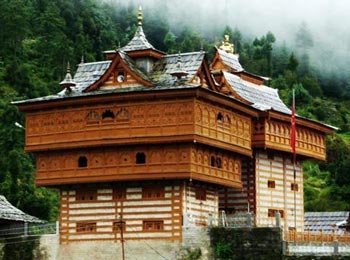 Shri Bhima Kali Temple is a popular temple located at Sarahan in the state of Himachal Pradesh, India. This shrine is dedicated to goddess Bhimakali who was the presiding deity of the rulers of the former Bushahr State. This temple is about 180 km from Shimla and is regarded as one among the well-known 51 Shakti Peethas. The town Sarahan is known as the gate way of Kinnaur. The Sutlej river flows down below at a distance of 7 km from Sarahan. Sarahan was known by the name Sonitpur in ancient Puranas.

Sarahan was once the capital city of the former Bushahr State. Bushahr dynasty initially had their base at Kamroo but later shifted their capital to Sonitpur. Later Raja Ram Singh made Rampur as the capital. There is a wide belief that the kingdom of Kinnaur was none other than the holy Kailash, which is considered as the holy abode of Lord Shiva. Having Sonitpur as its capital, this former princely state had an area extending till Kinnaur, where Lord Shiva is believed to have disguised himself as Kirata. The present day Saharan was called Sonitpur in ancient times. Banasura who was an ardent devotee of Lord Siva and the eldest among the one hundred sons of great ablative demon King Bali, was the ruler of this princely state according to Puranas. He is also regarded the great grandson of Prahlad, who was an ardent Vishnu devotee.

According to Mythology, during the Daksha yagna, the ear of Sati is believed to have fallen at this place and became a place of worship as a Pitha - Sthan. The goddess graces her devotees in the form of a virgin deity. This eternal goddess is consecrated at the top storey of this temple building. Goddess Parvati who is considered the daughter of King Himalayas is enshrined as a divine consort of Lord Siva in the storey below.

The nearest bus station is Sarahan.

The nearest railway station is the Shimla station.

The closest airport is the Shimla Airport.