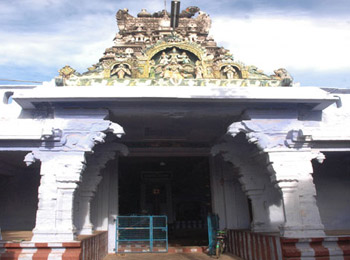 Shri Adhivaraha Perumal Temple is dedicated to Lord Shiva. It is Located at Kallidaikurichi is a town on the right bank of the Thamiraparani river in Ambasamudram Taluk of Tirunelveli District in the Inian state of Tamil Nadu.

The east facing temple does not have tower, but has the flag staff, bali peetha and Garuda facing the main shrine. The temple has two prakaras. The structure belongs to 15th century CE. The east facing sanctum sanctorum has the idol of Varaha in the sitting posture with Lakshmi on his left lap. The Utsava idols of Lakshmipati along with his two consorts are also found in the sanctum. It is generally Bhoomi Devi who is found along with Varaha. This is a unique feature in this temple.

As a tradition, Thayar and Sri Andal have their shrines separately in prakara to the sides in Perumal temples. Here, Mothers Sridevi and Bhoodevi are in separate shrines in the prakara. Great celebrated musician and composer Sri Muthuswami Dishithar had authored many Keerthanas-Songs on Adhi Varaha Perumal. The temple has many Garuda Sevas as many devotees organize this event as their prayer commitment.

There is a shrine in the vimana-tower above sanctum sanctorum for Pallikonda Perumal with Mother Sridevi, Bhoodevi, Lord Brahmma on Lord’s naval and Maharshis Brugu and Markandeya. After the morning Tirumanjanam to Lord Adhi Varha, one Puja is dedicated to this Perumal when alone, devotees can have this darshan. Main Garudazhwar is on the western wall. On Aadi month-July-August- on the Swati Star day, special Tirumanjanam and pujas are offered to him and he is dressed with flowers

Lord Adhi Varahaswami in the sanctum sanctorum graces the devotees in a sitting posture on the lotus designed stage-Padma Peeta- with Mother Bhooma Devi on His lap looking at Him. As Lord always is with Mother, He is praised as Nityakalyana Perumal – Perumal ever in his wedding form, hence the place is also called Kalyanapuri. Wedding means Kalyanam in Tamil. For a good match, those awaiting marriage, perform Tirumanjanam to the procession deity for desired results.

Kubera, the God of Wealth came down to earth to seek relief from a curse he incurred. After worshipping various Shiva temples, he desired to worship Lord Vishnu. He made an idol of the Lord, installed it on the banks of River Tambiraparani and worshipped. In course of time, the place disappeared. Lord appeared in the dream of a devotee and disclosed His presence in the place. The devotee found the idols. The temple was built later in the same place.

Chithirai Brahmmotsavam in April-May, Swing festival in connection with Aadi Pooram in July-August, Navarathri in September-October and Vaikunda Ekadasi in December-January are the festivals celebrated in the temple.

Devotees pray for success in dispute concerning land and prosperity.

The nearest airport is Madurai.

The nearest railway station is Tirunelveli.

Kallidaikurichi is 35 km far from Tirunelveli. The temple is very near the bus stop.