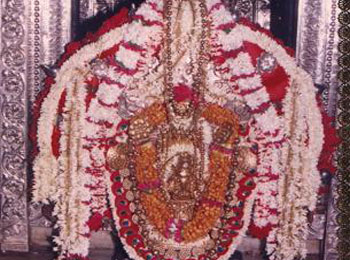 The deity of God Ganesha is worshipped at Shree Sharavu Mahaganapathi Temple located in Mangalore at Karnataka. The city of Mangalore is popular among the pilgrims as it houses several temples like Kudroli, Mangaladevi, Kadri, Sharavu etc. The temple of Sri Sharavu Sharabeshwara - Sri Mahaganapathy Kshetra is one of the ancient temples of Mangalore which has been standing since 800 years.

The temple is easily accessible to the devotees as it is located in the heart of the city. The devotees can also reach by walk from Hampankatta or can take an autorickshaw. 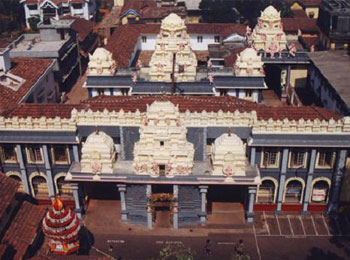 This temple is an ancient temple of Dakshina Kannada District, being built in the 12th century and its story of origination is narrated in the famous Skanda Purna. It was constructed by the Tuluva King Veerabahu and the deities of God Sharabeshwara and God Mahaganapathi are enshrined in the temple on the western side and the south side respectively.

The title of the temple ‘Sharavu’ was derived from the word ‘Shara’ meaning arrow. As per the legend, almost eight centuries ago, the ‘Sthalapurana’ or Maharaja Veerabahu of Tuluva region, mistakenly killed a cow with his arrow. The arrow was initially shot to kill a tiger standing beside a cow and thus the cow was shot. For redemption of this sin, he enshrined a Shiva Linga in the temple as per the recommendation of Sri Bharadhwaja. The Maharaja them worshipped the Shiva Linga as Sharabeshwara and therefore the holy place was known as ‘Sharavu’ while the temple tank was known as ‘Sharatheertha’.

The deity of God Sri Dhashabhuja Mahaganapathy and Goddess Siddilaxmi was identified on the southern wall of the temple. God Laxmiganapathi was also known as Yeshiva of Ganapathya cult by the devotees. After a period of time, the God endowed the sacred responsibility of worshipping to a Brahmin who was known as Ganesha Kekunnaya. Since then, the family members of Sri Ganesha Kenkunnaya have taken up the responsibility to conduct the pooja to worship God Sharabeshwara and God Laxmiganapathy. They are also known to be the ones with vast learning and devotion to God Mahaganpathy. A family member named Ganapathy Bhatta was also honoured by a King of Mysore, as he was given the title of ‘Shastri’ that means learned scholar along with a ‘Raja Mudra’ gold ring in 1836. Since then, the surname of the family has been changed from ‘Archak’ to ‘Shastri’ and they are privileged for being the ‘shile shile Mokthesara’ or hereditary trustee of the holy temple.

As per a historical fact, once Srirangapattana Tippu Sultan thought of robbing and stealing the precious goods from the temple while his military was marching over Mangalore. Before the robbery, the ruler had a nightmare where an elephant was crushing him under its feet and that scared him. The ruler then enquired about the dream and came to know about the powers of God Ganapathy of Sharavu Kshetra. He also came to know that the God was trying to warn him about the misadventure regarding the robbery of the temple. Tippu Sultan, after much deliberation gave up the idea of robbery and decided to offer 4 varahas of ‘Tastik’, that is gold currency every year to the temple to show his respect for the God. This temple was recently renovated by Late Sharavu Ramakrisha Shastri and his children named Sri Raghavendra Shastri and Sri Dr Sudesh Shastri are now continuing with the ancestral family tradition with pure sincerity and devotion.

The sacred festivals of Laksha Deepotsava, Samakranthi Rathothsava and Ganesha Chaturthi are celebrated in the temple every year.

The devotees can arrive at the Mangalore International Airport for easier access to the temple.

The temple is easily reachable from the nearest railway station of Mangalore.