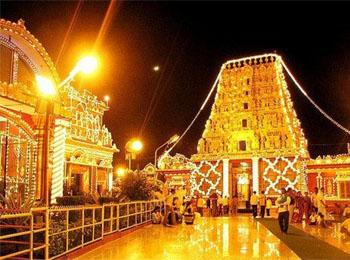 The Gokarnanatheshwara Temple, otherwise known as Kudroli Sri Gokarnanatha Kshetra, is in the Kudroli area of Mangalore in Karnataka, India. It was consecrated by Narayana Guru. It is dedicated to Gokarnanatha, a form of Lord Shiva. This temple was built in 1912 by Adhyaksha Hoige Koragappa and compared to the other temples in the Mangalore area, this temple is of recent origin. The temple is 2 km from the centre of Mangalore city. The temple has Gopuram (tower like structure) decorated with murals of various gods and goddesses. Murals depict scenes from Hindu epics and legends.

The main deity of the temple is Lord Shree Gokarnanatha ( Lord Shiva). Navarathri Utsava (Dasara festival) is very famous and is one of the main tourist events in this temple.

The Billava community in Managalore, was traditionally suppressed by the upper caste treating them as untouchables. Narayana Guru was well known as the uplifter of the downtrodden and a visionary social servant. Actually, Narayana Guru was establishing social equality through his temples in Kerala. A prominent Billava leader from the community Sahukar Koragappa visited the Guru along with the leaders of the community in 1908. The delegation appraised Narayana Guru about the problems faced by the Billawas. Based on the invitation, Narayana Guru visited Mangalore. After visiting, Narayana Guru selected the place in Kudroli and advised the community elders about a suitable location to build their temple. In the year 1908, Gokarnanatha Kshethra, Mangalore was identified, where foundation stone was originally laid by the couple Shri Amma Poojaarthi and Chennappa Poojaary, who were parents of the Koragappa Poojaary. Chennappa Poojaary is the son of Ugga Poojaary, who was responsible to build Brahma Baidarkala Garadi Kshethra, Kankannady, Mangalore in the year 1882. The divine Shiva Linga was consecrated by Narayana Guru in Gokarnanatha Kshethra. In Feburary 1912, Narayana Guru formally constructed the temple. Narayana Guru advocated that all God's creations had the right to worship the Almighty and preached that people irrespective of the caste, creed or religion must worship one divine force. Based on the advice of the Guru, idols of Ganapathy, Subramanya, Annapoorneshwari, Bhairava, the Nava Grihas (nine planets), Shanishwara (saturn) and Krishna were installed at the Kshethra. A marble statue of Narayana Guru was erected in the entrance of the temple and a crown studded with precious gems was offered by the devotees. In addition to idols of Sharada Matha and Maha Ganapati, life-size idols of Nava Durgas are installed in the premises, in an attractive way during Navaratri. All religious rites are observed for the entire period. Tableaux form a special part of the festivities and are taken around the main streets of Mangalore. Idols are then immersed in the well-decorated temple ponds in the presence of devotees.

Sri Narayana Guru (A social reformer and a saint) consecrated the Shivalinga in this temple in 1912. This temple is situated at Kudroli, which is about 3 Km away from the main city area of Hampankatta in Mangalore. The original temple structure was in Kerala style, which was replaced, by Chola style during recent renovation in 1991. The main deity of the temple is Lord Shree Gokarnanatha ( Lord Shiva). Navarathri Utsava (Dasara festival) is very famous and is one of the main tourist events in this temple. A grand procession of Goddess Durga along with the Nava Durgas takes place during this festival now popularly known as "Mangalore Dasara", which attracts many tourists and devotees from distant corners of the state, Nation and all over the world and is very popular like Mysore Dasara.

The Billawa Community was being traditionally suppressed by the upper caste treating them as 'untouchables'. It is in such a scenario that the community found a messiah in Sri Narayana Guru. Sri Narayana Guru who hailed from Kerala has been regarded as the uplifter of the downtrodden and a visionary social servant. Learning about the work undertaken by Sri Narayana Guru in establishing social equality through his temple in Shivagiri, Kerala, a prominent Billawa leader from Mangalore, Sahukar Koragappa visited the Guru along with the leaders of the community in 1908. The delegation appraised Sri Narayana Guru about the problems faced by the Billawas in admission of the community into the temple at Mangalore. Sri Narayana Guru visited Mangalore on invitation from this delegation and ascertained for himself, the exactness of the then prevailing situation. After visiting the place, Sri Narayana Guru himself selected the place in Kudroli and advised the community elders about a suitable location to build a temple and the work began under his direction in the year 1908. Elders such as Sahukar Koragappa took the initiative in ensuring smooth progress in the temple's construction.

Sri Narayana Guru himself formally consecrated the temple in February 1912 by installing the Sacred Shiva Linga, which was brought by him. He also named this place as Shree Gokarnanatha Kshethra. Sri Narayana Guru advocated that all of God's creation had the right to worship the Almighty and preached that people irrespective of the caste, creed or religion must worship one divine force, known by different names. As per the Guru's advice, idols of Lord Ganapathy, Lord Subramanya, Goddess Annapoorneshwari, Lord Bhairava, the Nava Grahas (Lords of Nine Planets), Lord Shanishwara and Lord Shri Krishna has been installed at the Kshethra. This has helped devotees to worship at all these sannidanams (abode) and seek blessings and solace for their varied problems at one place.

The dasara festival is celebrated with much grandeur. The dasara celebration of this temple is popularly called Mangalore Dasara. Mangalore Dasara is celebrated in a very spectacular way, by worshiping the idols of Ganesha, Adhi Shakthi Maatha, Sharada Maatha, Navadurgas such as Shaila Puthri Maatha, Brahmachaarini Maatha, Chandrakaantha Maatha, Kushmaandini Maatha, Skanda Maatha, Kathyaahini Maatha, Maha Kaali Maatha, Maha Gowri Maatha and Siddhi Dhaathri Maatha. All these idols are grandly worshipped for nine days of navarathri. On the tenth day, these idols are taken in the grand procession of Mangalore Dasara throughout the city. The procession returns to Gokarnanatha Kshethra on the next day morning, where all the above idols are immersed in the lake, inside the temple premises.


How to Reach Shree Gokarnanatheshwara Temple

The nearest airport is located at Bangalore Airport. The nearest railway station is Mangalore. This temple is situated in Kudroli area about 5 km from the city of Mangalore.