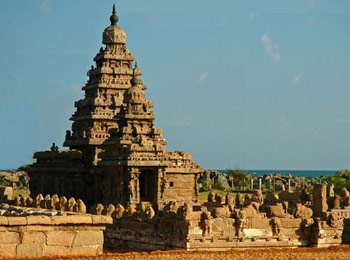 The Shore Temple located is in Mahabalipuram, Tamilnadu. It is dedicated to God Shiva. The Shore Temple is has been named so because it is located on the eastern shore of Tamilnadu, overlooking the Bay of Bengal. It is a granite temple, dateing back to as early as 8th Century AD. The village of Mahabalipuram was a busy port during the 7th and 8th Century Pallava Reign Narasimhavarman 11. The Shore Temple is a five-storeyed structural Hindu temple that exquisitely stands out from the surrounding monuments at the site. 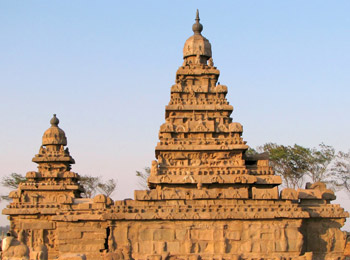 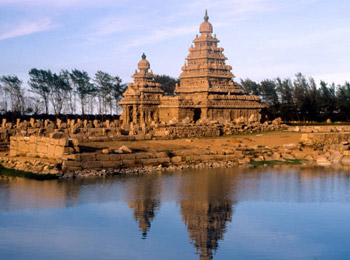 God Shiva also known as Mahadev is one of the main deities of Hinduism. He is the supreme god within Shaivism, one of the three most influential denominations in contemporary Hinduism.Lord Shiva is usually represented in the form of linga, which represents the energies for life on both microcosmic and macrocosmic levels. In a Shiva temple, the linga is placed in the center, under the spire. It symbolizes the naval of the earth. 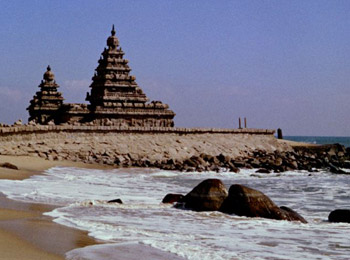 The Shore Temple was originally a set of 7 temples, which in ancient times was referred to as the "Seven Pagodas" by sea faring sailors who would use it as a landmark for navigation of their ships. This shore temple complex was the culmination of the architectural creations that were initiated by the King Narasimha Varma I (popularly called as Mammalla after whom the Mamallapuram town is named), in mid 7th century starting with the Cave temples and the monolithic Rathas. The Temple was built by Narasimha Pallava 1 and was subsequently improvised by his descendant Narasimha 11. Ancient Legends referred to the origin of these pagodas in mythical terms. Datiya King Hiranyakasipu who refused to worship Vishnu as the supreme god, had a son Prahalad who was a big devotee of God Vishnu. Hiranyakasipu tried to force Prahlada to worship him as god initially by showering him with affection. When Prahalada did not yield, he was threatened with death penalty. Even this did not deter Prahalad. Hiranyakasipu then relented and allowed him to come home. Father and son quickly began to argue about Vishnu’s nature. When Prahlada stated that Vishnu was present everywhere, including in the walls of their home, Hiranyakasipu kicked a pillar. Vishnu emerged from the pillar in the form of a man with a lion’s head, and killed Hiranyakasipu. Prahlada eventually became the king, and had a son named Bali, who was popularly known as Mahabali . Mahabali founded the place of Mahabalipuram. Myths also mention that Gods were jealous of the architectural splendour of the monuments of Mahablipuram, and as a result they caused floods to occur, which submerged most parts of the city, except for a few structures that are seen now. 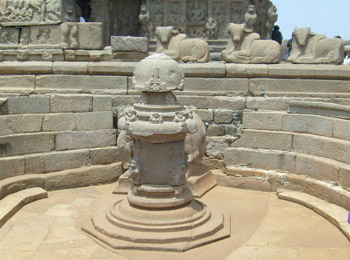 The devotees go to this temple to seek blessing of both Shiva and Vishnu at once and also for attaining peace.

How to get there or Accessibility:

TMahabalipuram is connected by a number of interconnecting roadways to Chennai, Chengalpattu, Pondicherry and Kanchipuram.

The peculiarity about this particular temple is that Vishnu reclines on the floor listening silently to the sounds of names. The figure of Vishnu is found in segments which are to be looked through various doors. The other sculpture is portrayed in such a way that God Vishnu seated in mount Garuda helping Gajendra the elephant found in the southern wall and the northern wall is the portrayals from the life of God Krishna. The grand temple is surrounded by mandapams and compound walls. There is a rock - cut image of a lion being ridden by two young women. The lion has a small square cut in its belly. There is also a carving of a buffalo demon running with a stick in his hand located in the northern side. The temple looks beautiful with lights during weekend evenings.

The city of Mahabalipuram is also popular for the festival of Pongal. The festival is celebrated in mid-January every year. Yet another popular festival that is organised around the same time is the Dance Festival. Far-famed artists put up fabulous performances of Bharatnatyam, Kuchipudi, Kathakali and Odissi dance forms. With the beautiful backdrop of the Shore Temple, the celebrations fill every heart with intense delight.

The best time to visit Mahabalipuram is from the month of October to March.

Entry fee for the Shore Temple and the Five Rathas:

Rs. 10 for Indian citizens US$ 5 for foreign nationals Free for kids below 15 years