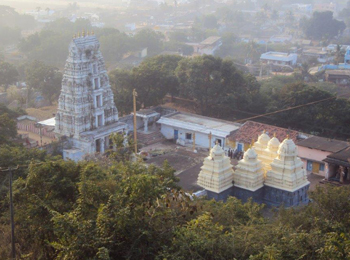 Lakshmi Narashimha Swamt is in Agiripalli. It is 25kms from Vijayawada. This temple is dedicated to Lakshmi Narasimha Swamy.

According to puranas it is about 4000 years old temple. There are some archaeological evidences to confirm that the Temple and Pushkarini are present from 15th Century onwards. In 1561A.C a devotee arranged garden, Bhoga Mantapam. In olden days flowers from this garden were sent to Bhadrachalam Sita Rama Swamy. One has to climb 740 steps to reach the temple. There is no ghat road. King named Subhamatudu did penance invoking Lord Vishnu. When Lord Vishnu appeared before him he asked Lord to stay on his head along with his consort Mahalakshmi. Lord Vishnu told him to pray for Lord Siva to fulfill his wish. He did so and as a result he took the shape of a hill which is called as Sobhanachala. According to the wish of Sobhanachala Lord Siva and Lord Vishnu stayed on that hill.

Those who have Kuja Dosham and whose marriage is delayed will get married soon after performing Kalyanam of Vyagra Lakshmi Narasimha Swamy in this temple.