The Kashmir valley is known all over the world for its beauty and charm. It is situated about 300 kms from Jammu across forested ravines and steep mountain passes. Kashmir formed part of the empire of Emperor Ashoka, about three centuries before Christ. The main heart of Kashmir is the fertile Vale of Kashmir, also known as the valley.

Kashmiris love dance and music, and marriages, festivals and other occasions provide them the opportunities to enjoy themselves. The ancient caves and temples of Kashmir reveal that a strong link existed between Kashmir and South Indian cultures at the beginning of the Christian era. The classical folk dances of the south were also performed here during the marriage ceremonies. The popular Hafiza dance performed by Kashmiri women to the accompaniment of Sufiana Kalam was later replaced by the Bacha Nagma, performed by young boys dressed like women.

The bhand jashna (festival of clowns), is a 300 to 400 year old Kashmiri folk theatre that was performed in village squares and satirizes social situations through dance, music and clowning. Kashmir is known for its exquisite craftsmanship which flourished over the centuries. During the winters, the craftsmen make handicrafts and sell them to tourists coming there during summers. Some of the famous handicrafts of Kashmir are the hand-knotted Persian rugs and traditional rugs, carpets, embroidered woollen caps, shawls and jackets, the Jamawar, silk-soft Pashmina shawls, crewel embroidery, embroidered gold and silver dresses, caps, boleros and ponchos, stone studded jewellery, filigree, enamelware, articles made of beaten and carved silver, articles made of walnut wood and papier mache, silks and embroidery. Wood carving is another special art of Kashmir which is very unique. The walnut furniture made in Kashmir is exquisite and work done on the furniture speaks about the Kashmiri's patience and workmanship.

Kashmir is also known for the Kashmiri saffron, which is very expensive. But, only a small quantity of it provides flavor to a dish. Walnuts and almonds are available throughout the year. Shah Zira, Kashmiri chilies and honey are the other items which are grown in Kashmir. During festive occasions, the Kashmiris serve a feast called Wazwan. The Wazwan consists of 36 meat dishes prepared specially by highly trained chefs and eaten together. The feast begins with the passing around of the Tash-t-Nari for guests to wash their hands, followed by the various delicacies served in large silver platters or thramis piled high with long grained rice crowned with Dum Kokur (chicken cooked in saffron scented yoghurt), Alu Bukhara Korma (mutton simmered in a splendid sauce of yogurt, almonds and plums) along with methi, Rogan Josh, Kebabs, vegetables, gushtaba, Tabak Maaz (crunchy rib chops), Seekh Kababs and chutneys. The dessert is usually phirni and Kahwah. Kahwah is the green tea, flavoured with saffron, cardamom and almonds. 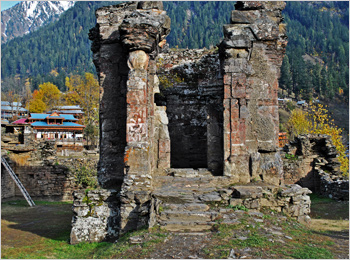 This temple is also known as Sharada Peetha. Adi guru Shankaracharya paid a visit to Sharada Nilaya in Kashmir known as Sarvajna Peetha (the seat of the all-knowing). Those who are not all-knowing are not entitled to sit on it; no one could claim to be an expert in any religion or philosophy without sitting on it. Shankara did not wish to show himself off as Sarvajna. He felt that Sri Sharada Nilaya with Sarvajna Peetha was by itself a place worthy of visit by all devotees. Besides, Kashmir is the crown of Bharat. So he resolved to go there, lest the ancient Hindu religion should perish there. There are four gates in four directions for entering Sharada Nilaya. Eminent scholars and philosophers had entered it from various directions and had established their scholarly merit but no one so far had adorned this chair of Sarvajna. And also till their no one had even attempted to enter the temple through the Southern gate May be this gate was waiting for Acharya Shankara, the one who was from the South! Scholars of many group and communities were waiting for him in the premises of Sir Sharada Nilaya All were filled with a feeling of reverence to see him who was learned in both Jnana and Vijnana Yet the scholars in religious philosophies of Jaina, Bouddha, Samkhya, Yoga, Nays and Vaisheshika confronted him at the time of his entry to the temple, Shankara defeated all of them in philosophical debate and then entered the temple through the Southern gate. 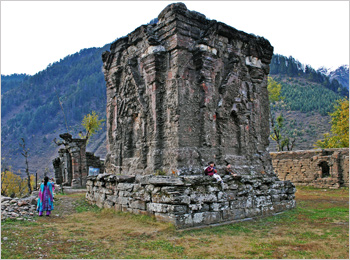 Acharya went to ascend Sarvajna Peetha. Sri Sharada, the presiding deity of all learning, herself set a test for him. Shankara passed this test also. After this the Goddess Herself blessed him, proclaiming his omniscience, according to the ‘Shankara Vijayas’. Ascending the seat of Sarvajna situated in Kashmir of the North is a symbol. The meaning of it is that Shankara reached the peak of spirituality. This temple is presently completely destroyed. 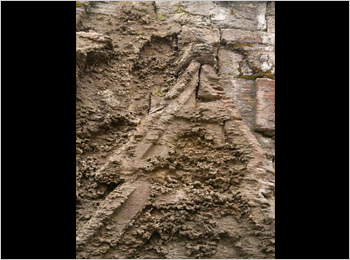 Once Parvathi devi asked Lord Shiva to build a house for them. But, Shiva is not interested. He loves Vairagya. He replied that he can't do it because of lack of money. Parvathi didn't agreed. She asked him again and again. Finally Shiva called Vishwakarma and ordered him to build a house. Vishwakarma went to Lanka dweepam. He built a wonderful palace. Shiva wanted to do Griha pravesam. At that time Ravana is doing Tapasya for Lord Shiva. Pleased by his Tapasya, Shiva and Parvathi appeared before him. Shiva gave boons. Ravana is Brahmin by birth. He is a master of four Vedas. Parvathi asked Ravana to perform Puja for their Griha pravesam. Ravana accepted it very happily. He did all Pujas and made them enter the house. Pleased by the dedication of Ravana in doing Pujas, Parvathi told him to take a boon from her. But, Ravana is only great at Tapasya and Knowledge. He is not good at heart.

Ravanasura asked Shiva about taking a boon in return to the Puja he made. Shiva replied that it is not good for a Brahmin to ask returns for the Puja. A real Brahmin must satisfy with the Dana and Dakshina given by Yajamani. He should never ask what to give as Dana or Dakshina. Parvathi told that Ravana can ask any thing he wishes. Ravanasura was attracted by the Lanka palace. He asked the palace as a boon! (Who knows? Parvathi may also be convinced by the Vairagya of Shiva.) She accepted. She gave Lanka palace to Ravanasura as Dakshina! She was fully depressed. Seeing that, Ravana asked Jaganmata to live in Lanka. Shiva disappeared. Parvathi said that she would be in the form of Shankari (Shakti peeth), as long as Ravana followed her word. She also warned that she would leave Lanka if Ravana didn’t care for her. She was going to Kailasa with sorrow and grief. In Kashmir, Goddess Saraswati appeared before her. Saraswati consoled her, but Parvathi was frustrated and told Saraswati that she was speaking like a parrot. Parvati called her Sarika (one who speaks like Parrot). She told her to stay there and say such things to everyone. Saraswati appeared in Kashmir as a Shakti peeth. Parvathi went to Kailasa.

Ravana built temple for Shankari and grew Ashoka vanam around the temple. That is the most beautiful garden in Lanka. But, after some time Ravana brought Sita mata from Lord Sri rama. Shankari mata told Ravana to return Sita to Sri rama. But he refused. Shankari left Lanka and was passing through the forests of Kashmir to reach Kailasa. At that time there are many great devotees of Parvathi in Kashmir. They pr?yed her to stay there and give blessings to them. Shankari accepted their plea and appeared as Vana Durga.

In 1948, during raids by Pakistani tribal raiders, the village fell into Pakistani hands. A famous learning centre of Kashmiris, it is identified by noted historians and chroniclers including Al Beruni (1130 ad) and M A Stein, who visited the temple in 1892, (in Rajtarangini) as one of the most important temples of the Hindus equivalent to the Shiva Lingam of Somnath, Vishnu of Thaneshwar and Surya of Multan. Abul Fazl in Ain-i-Akbari (16th century) says that on every eighth day of the month at the time of full moon, the temple "shakes and produces the most extraordinary effect." He however does not explain the "extraordinary effect.” The temple is so vital to Kashmiris that Kashmiri language has the script of Sharda, which is little similar to Devanagari. Kalhana in Rajatarangini has said, devotees of Durga and Shiva from all over the country would flock to the temple of Sharda which can be approached from Bandipur in North Kashmir, about 80 km from Srinagar. Through centuries the temple had remained the object of worship and devotion of lakhs of pilgrims from all over the country. Though in ruins now, the entire temple complex inspires grandeur and awe.

Islamabad Intl Airport is the closest major airport to Sharda.

Sharda is accessible by Neelam road from Muzaffarabad. Buses run daily between Muzaffarabad and Sharda in good weather.