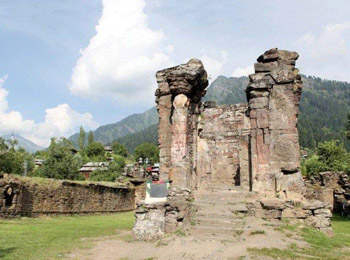 The temple is located in the remote village of Sharda, in Neelam Valley, at a distance of 60 miles from Baramulla and 40 miles from Muzaffarabad. It lies 16 miles to the northwest of the Line of Control in a militarily sensitive area. Sharada Peeth, located in the village of Sharda in Azad Kashmir. It is situated near the Line of Control which divides Pakistan administered Kashmir from Indian administered Kashmir. The temple dedicated to the goddess Sarasvati (Sharda) is on the banks of Neelum River in Azad Kashmir.

The temple is so ancient that Kashmir State was earlier known as 'Sharada Peeth'. It is at this temple that Sankaracharya received the right to sit on the Sarvanjnanapeetham or Sarvajna peetha(Throne of Wisdom).The temple is at a height of 11000 feet above the sea level and is about 70 miles from Srinagar, summer Capital of Indian Administered Kashmir. The Sarada idol at Shringeri Sharadamba temple was once said to have been made of sandalwood, which is supposed to have been taken by Sankaracharya from here.

The temple had periodically fallen into disrepair by the 14th century, and was last repaired by Maharaja Gulab Singh of Kashmir in the 19th Century. Following the brief 1948 war in the region between Pakistan and India, the site came under control of Pashtun tribesmen who invaded the region. Control was then passed to the newly formed rebel government of Pakistan administered Kashmir. The site was heavily damaged in the 2005 earthquake which struck the region, and has not been repaired since that time by the government of Pakistan. Pakistani Hindus rarely visit the temple, preferring to visit sites farther south in Sindh, Balochistan, and Punjab provinces. As such, restoration of the temple is not considered a priority in the manner that Katasraj Temple was regarded by the Pakistani government.

To fly into Kashmir, take the Srinagar Airport (15 km away), which is well connected to prime Indian cities. Kashmir has a 135 km (84 mi) long modern railway line that started in October 2009, and was last extended in 2013 and connects Baramulla in the western part of Kashmir to Srinagar and Banihal. Transport is predominantly by air or road vehicles in the region.