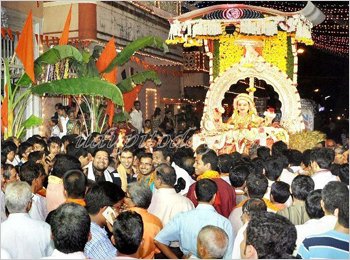 The Shri Sharada Mandira is a Goddess Sharada temple located at Kunjibettu in Udupi district. 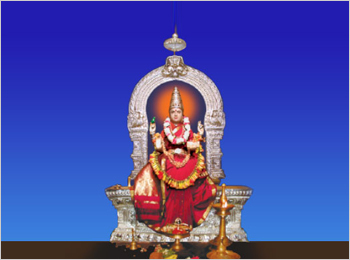 ADI SHANKARACHARYA, the proponent of 'ADVAITHA' Philosophy founded Chaturamnaya Peethas in four centres of "Bharatha Varsha" (India). One among them is SRINGERI situated in Chickmagalur District of Karnataka state. Mother Sharadamba, the presiding diety is blessing millions of devotees from there. It was the intense desire of Late Alevoor Shyama Rao, one of the founders of Sharada Mantap, to build a temple for 'Mother' and 'Sri Shankaracharya' at Kunjibettu. Udupi. Unfortunately this could not be achieved during his life time. But the wish remained in the hearts of his friends and relatives, to see light in 1988.

Blessed by his Holiness Srimadabhinava Vidyatheertha of Sringeri, the friends and relatives of Late Shyama Rao and people of the locality started the temple project under the able leadership of Sri Ambalpady Krishna Rao - Former Chairman of Syndicate Bank. The project was completed in 1988, and His Holiness Srimadabhinava Vidyatheertha Swamiji installed the three Shrines - Sri Sharadamba at the centre and Sri Mahaganapathi and Shankaracharya by her sides. It was a significant Co-incidence that his Successor Sri Sri Bharathi Theertha Swamigal placed the 'Kalasha' on the gopuram. Since then Poojas are being performed to the three dieties regularly in the morning and evening as per vedic rites. The number of devotees increased day by day and the temple has become a place of Bhajan, Archan, Sthothra Patana for the people of the locality. As a result, the prayer hall appeared to be insufficient to accommodate the visitors. In view of that management felt to expand the temple and add new space around the temple.

In 2007 management felt that temple require additional place to perform Yaga, Yajna, Samohika Bhajana, Parayana,etc and also to perform other religious functions in the temple. They constructed new Jana Mandira a mini hall having total 2500 sqare feet an ideal hall for small religious function, which was inaugurated in march 2008 by Sri Sri Narashimhashram Swamiji of Sri Matha, Balekuduru. 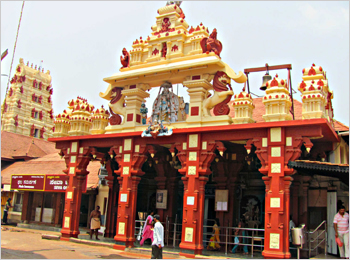 The idol of Goddess was installed by Sri Abhinava Vidyadheesha Theertha Swamiji of Sringeri Mutt. Some of the other deities worshipped here are Jagadguru Shankaracharya and God Ganapathi. The shrines which were reinstalled (Punar prathista) in three separate seat are Maha Ganapathy, Sri Sharada parmeshwari and Sri Shankaracharya. Among them Sri Sharda is the main deity.

With the blessings of Sri Sri Bharathi Theertha Swamiji of Sri Sringerimatta Punar prathista and Brahmakalashabhisheka was done in his presence on 11-3-2004 who truly believes and worships Sri Sharada Parmeshwari, she will fulfill their wishes, this was the blessing of Sri Swamiji. 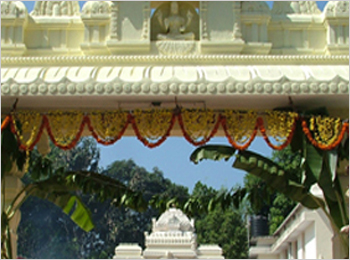 In Mourya Kingdom Sthanikas were local authority and Tax collector for the kingdom. During that time Sthanika means Officer of the Sthana. Sthana means Province which made according to administrative convenience. In Tulunadu Sthana means Devasthana (temple) or matta, Sthanika means Officer (Dharmadhikari) or Head of the Devasthana (Temple). Making arrangement for all religious performance of the Temple and diety, was his prime duty. Sthanikas were very popular as Temple chief officer, Dharmadhikari, some time as Purohit or Sahiti. Sthanika means position of respect. He is Shaiva and follower of Panchayatana (Making Puja of five diets-Shiva, Durga, Ganapathi, Vishnu, and Surya) Puja Paddati (sytem) and most respected person in the village. Out of Sapta Kshetra in Tulunadu Sri Subrmanya of Kukke Subrmanya Kshetra was Sthanikas main diety, that is why Sthanika's are called Subramanya Brahamins. In Kukke Subramanya at Sri Subramanya Temple still there are Panchalohas Panchayatana (Five deities) idols. In Kadaba, near Subramanya one of oldest temple of Shrikanta and very rare Jatamukuta Ganapathi both different temples facing east, in one main temple complex, even today managed by Stanika Brahamin. It was reported that Shri Adi Shankaracharya visited that place and that time this place was known as Ganapatyapura, then he visited Talaaki, a near by village and established a matta and first time preached pachayatana puja paddati. That Time Temple management in Tulunadu was as follows

One of the famous historian Prof. K. A. Neelakanta Shastri says, with the large increase in gifts of land, cash etc. to the temples both from the state and devotees, temple management became a complicated and responsible duty, and we begin to hear more and more in the inscriptions and records of the time of the Sthanikas either acting singly or boards, though the exact manner of their appointment is not easy to ascertain. The regular cultivation of temple lands including the regulation of tenancies and leases and investment of temple monies as well as the control of the temple staff, which included a considerable number in large temples vested in the Sthanikas. Sthanikas are Shiva Brahamins or called Tulu Brahamins were working as senabhova, padamooli, apartment Sthanadhipati of temple. Some of them were working as Senabhova or Treasurer at palace of King/Local chieftain. In the history of Temples of Tulunadu Sthanika, Shanty, Tantri and Padamooli all were Brahamins.

It was the history and glory of the past. Once Sthanika Brahamins were highly respected by the public, for their character, knowledge, proficiency, and efficiency, lost their image because of their proud, lack of learning of Veda and other Dharmica puja. They became more of Loukika than Paraloukika. Gradually they lost chief executive post of the temple, due to failure in their duty, or lack of priority or dispute in Shiva and Vaisnava / Madhva Matha. Some of them to changed and followed Madhva Matha. Remaining continued to follow Advaitha Matha and continued as Shisyas of Sringeri Jagatguru. During the British Raj Kingdom/local chieftain lost their power and it directly affected the Sthanika Brahamins, who lost their administrative position. By land reform they lost land also. By that most of the people became poor.