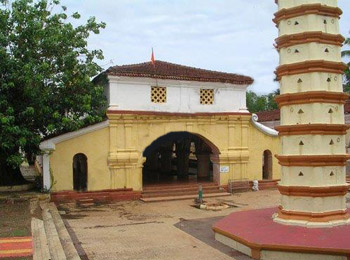 The Sri Shanthadurga temple at Dhargal is located 14 km from Mapusa and 27 km from Panaji in Pernem. The temple has beautiful natural surroundings and is said to have been built in 1550 A.D. It is housed in a vast compound and has a deepa-stambha (lamp post) in front and a gopuram (tower) atop the sanctum. This temple is dedicated to Sri Shanthadurga, an incarnation of Goddess Parvathi, consort of Lord Shiva.

Shanthadurga or Santeri is worshipped as Gramadevi in many villages and is a manifestation of Durga adopted by Goans. Also called the goddess of peace, Shanthadurga is believed to have stopped the quarrel between Shiva and Vishnu. The festival of this Goddess is celebrated in month of December.

The Shanthadurga temple at Dargalim is one of the few temples in Bardez that has survived the destruction by Portuguese. The Goddess of this Sri Shanthadurga temple is known to have been moved from the house of Sri Kichkar of Taliwada, Mapusa to Sanquelim which was a part of the Maratha kingdom of Sawantvadi at that time. It was later shifted to its present site at Dargalim which was then a principality of the Sawantvadi kingdom.

The Shanthadurga temple at Dargalim is known to have been built of mud and palm leaves as laterite or granite were rarely used. It has other three stories with Mahadev and Ganapathi in one, Dadd in the second and Ravalnath in the third. At different spots one will also see niches with idols of Purmar, Santeri, Dadd and Ravalnatha.

The two railheads in Goa are Madgaon and Thivim.