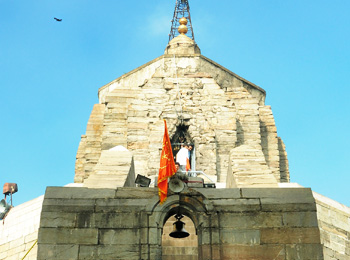 The temple is located atop of the hill Takht-i-Sulaiman or "Throne of Solomon." Adi Shankaracharya (788-820AC) lived, meditated and did Tapas (penance) here to review Hinduism which had been eclipsed by Buddhism. He worshipped the Shiva Lingam, which is still found in the Sanctum Sanctorum. Information boards on the spot tells, that Adi Shankaracharya "attained spiritual knowledge" at this particular place and after that went out and formed the four Hindu schools of Advaita, the philosophy of non-dualism. 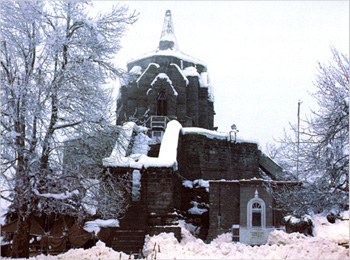 The Jyoteshware temple rests on a solid rock. A 20-foot tall octagonal base supports a square building on top. The terrace around the square temple is reached by a stone staircase enclosed between two walls. A doorway on the opposite side of the staircase leads to the interior, which is a small and dark chamber, circular in plan. The ceiling is supported by four octagonal columns, which surround a Basin containing a Lingam encircled by a snake. The temple is built in early Kashmiri style. It tries to introduce the early Sihara style and has still one-storied gable pediment which is evident even now. The temple is an early specimen of the horse shoe arch, prominent in the final stages of this architecture, as, for example, in Martand. It is said that massive polished steps was leading right from the Jhelum River up to the top of the hill. These stones were removed in the 16th century by Muslim rulers and used for the construction of a mosque. It is very likely that both Jesus Christ (and his disciple Thomas) have been at this age old temple. Inscriptions on the stairs leading up to the shrine support this notion. Scriptures and other indications proves beyond doubt that Jesus has been in Srinagar and maybe even lived there for a while, as Srinagar in those days was a very important religious and cultural center. His burial at the Rozabal Mausolaeum also indicates that he had a strong connection to this particular place. 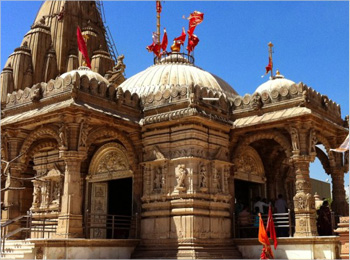 This temple is dedicated to Lord Shiva. The main shrine consists of a circular Cella. The interior of the sanctum is covered by a ply board ceiling concealing the flat sandstone slabs which are supported by two lintels bearing the load on four eight sided column of stone in the centre. The lower course of the ceiling is still extant in its original shape. There is a large oval shaped Shiva Lingam with reddish black stone probably brought from the Naramada River valley in Madhya Pradesh of Central India. 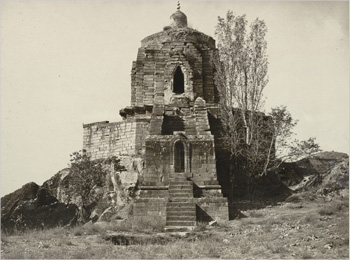 The temple was built by Jalauka, the son of the great Emperor Ashoka, about 200 B.C. King Gopadatta of Kashmir who ruled from 79 to 109AD, rebuilt it and dedicated the temple to Jyesteswara. The hill was called Gopadri and the village at its foot on the south is still called Gopkar. Mulla Nadri writes in the first history of Kashmir, "Tarikh-i-Kashmir", 1420 AD

"Raja Ach ascended the throne and ruled for 60 years. He founded the town of Achabal in Kotiar, Kashmir. After his death, his son Gopananda ruled the country, under the name of Gopadatta. During his reign many temples were built and repaired. At that time the dome of the temple on the top of Solomon hill had cracked. He asked one of his ministers, named Sulaiman, who had come from Persia, to repair the cracked dome of the temple. On this, the local Hindus raised objections saying that as Sulaiman was an infidel and followed another religion, he had no right to repair the sacred temple of the Hindus.

During this very period, Hazrat Yuzu Asaph arrived from the Holy Land, Bait ul Maquaddas, to the Holy Valley, Wadi a Aqddas, and proclaimed his ministry. He absorbed himself in prayers day and night, and having attained an elevated position in virtue and piety, he declared to the people of Kashmir that he was the messenger of God. He called upon the people to follow the words of God, and many believed in him. Thereupon, Raja Gopadatta referred the objections of Hindus to him for his decision. It was under his orders that Sulaiman, whom the local Hindus named Sandiman, completed the repairs of the cracked dome of the temple, in the year 54. Sulaiman also had engraved the following inscriptions on the stones leading to the stairs of the temple: "During this period Yuzu Asaph declared his Ministry. He was Yusu, the Prophet of the Children of Israel".

In a work by a Hindu it is said that this Prophet was in reality Hazrat Issa, the Soul of God - on whom be peace and salutations. He had assumed the name of Yuzu Asaph during his life in the valley. The real knowledge is with Allah. After his demise, Hazrat Issa, on whom be peace and salutations, was laid to rest in the tomb in the locality of Anzimar. It is also said that the rays of prophethood used to emanate from the tomb of this Prophet. Raja Gopadatta passed away after having ruled for 60 years and 2 months."

The present struture probably dates back to the 9th century AD and are dedicated to Lord Shiva. The temple was renamed Sankaracharya, under a Hindu Maharaja in 1848. 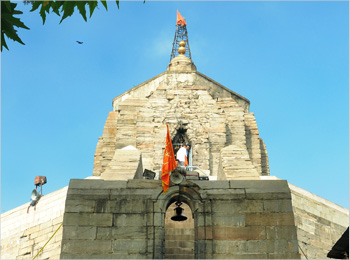 The best time to visit the Shankaracharya Temple is between May and September when the weather is pleasant. It snows in the winter months in and around Srinagar and winters are very severe.

The nearest airport is approx. 25 Kms away in Badgam Dist, for the temple. The Airport is connected with major cities of India

The nearest rail head is at Jammu which is 300 Kms away.

Shankarcharya Temple lies in Srinagar District across the Nehru Park which is a beautiful island within the Dal Lake. One can either trek to Shankaracharya Temple from the Durganag Temple lying in civil lines area or alternatively one can take an automobile upto the footsteps from the Boulevard road. Then climb is approx. 7 Kms and then there is a flight of 100 odd steps up. The road passes through jungle and offers beautiful views.