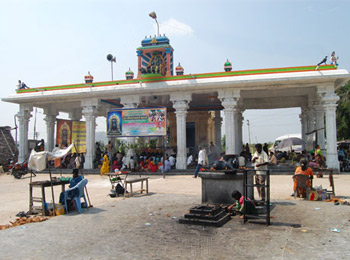 Shani Bhagavan Temple is located at Erikuppam Village in Thiruvannamalai District of Tamilnadu. This is a famous Navagraha Temple dedicated to Sani Bhagavan/Shani Bhagavan (Planet Saturn). This 15thcentury temple was discovered recently and has been renovated. On Saturdays, devotees throng the place. Normally Sani Bhagwan is worshipped in idol form in almost all temples. Here he is in Shivalinga form in this temple with a Yantra in the Linga. Yantra is a diagrammatic representation of the power of the deity we worship.

Sri Saneeswara Bhagwan is the principal and presiding deity in the temple. There is a shrine for Lord Varasiddhi Vimayaka only in the prakara-corridor. Lord Saneeswarar is present in a unique Yantra form which is considered more powerful and hence the name ‘Yantra Saneeswarar’. Sri Saya Devi, mother of Sri Saneeswarar is present to his left side and due to the presence of his mother; Saneeswarar is in a peaceful and happy mind state here. Hence he is able to bless his devotees, bestowing complete happiness, removing their sorrows, sins and difficulties.

The temple is in the midst of green fields. The entrance of the temple has a sculpture showing Sani Bhagwan in a Rath (car) drawn by 5 crows. There are also paintings of all planets with their vahans in the front hall. As there was no proper shrine earlier, even today the temple has no roof. Sunlight, wind, rain, all falls on the temple directly. We can hear elders saying ‘Don’t stand and pray straight in front of Saneeswarar’ but his straight sight here will bring only goodness to life.

The Holy Shrine is open to the skies, without any roof-top. Saneeswarar is present in the Yantra form nowhere else in the world excepting this one and another in Shinkapur, 70 km from Shirdi, in Maharashtra state. This Saneeswara Yantra has been made in a single granite stone, with a fantastic size of 5.5 feet height and 1.5 feet width and looks majestic.

It is having the mark of Sun in the upper left side, Crow in the middle side and the moon in the upper right corner. Below these, Peejakshara Manthras in the form of Shutkonam (six corners – shut meaning six and konam meaning corners) can be seen. Below this we can see ‘Lakshmi Kadaksha Yandra’ and yandras relating to water and fire.

The Shutkona Yandra consists of Manthras in a right left mirrored form, praising Lord Shiva, Lord Anjaneya and Saneeshwara. This Yandra is believed to be one of the most powerful ones and unique in its kind. It is suggested to offer archanas with Vilwa leaves related to Shiva worship. Special abishek is performed on Saturdays between 6.00-7.30 a.m. covering the Sani Hora time followed by special pujas in the Yagasala.

Against the idol form, Sri Sani Bhagwan graces in the Erikuppam temple in the form of Shivalinga. A king built this temple for the planet installing him as a Linga with the yantras. The temple disappeared due to ravages of time leaving the Linga alone in the open space. Later, people built this temple. As he graces as a Linga with Yantras, He is known as Enthira Saneeswarar

Saturn transition day is devotionally celebrated in the temple occurring once in two and half years.

It is suggested to offer archanas with Vilva leaves for Shiva worship. On the next day of the Pongal, Mattu Pongal day, abishek is performed with 108 pots of milk. Those who may have to face adverse consequences due to the transit of this planet and those who may have this planet adversely placed in their very horoscopes, pray to Saturn for relief and for diluting the intensity of the effects thereof. Sani transition commonly known as Sani Peyarchi is observed in the temple with a five day puja and homas. People seek his blessing for child boon, wedding and success in litigations. Saturn is also the authority to decide the longevity of lives and professional successes. Hence, people pray to him for a long life and development in their respective trades. They light lamps in His shrine with black dhil oil known as Ellu Ennai in Tamil.

The nearest airport is located at Chennai Airport.

The nearest railway station is located at Vellore Railway Station.