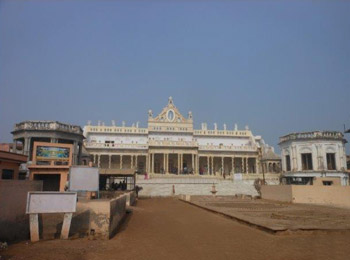 Shahji Temple, Vrindavan is one of the best known Holy Places in Vrindavan. The temple is unique in its own way and has gained a lot of popularity due to its magnificent construction. The temple has been dedicated to Radha-Krishna.

The architecture of the temple is entirely different from the usual style of a Hindu temple. It is a blend of Greek, Mughal and Hindu architectures. The entire temple is built of Italian marble. As one enters through the main gate it will reminded of the Imam Bara of Lucknow. one can mark a great resemblance between them. The spacious verandas of the temple are supported by spiral columns (Tede Khambe) chiseled from one single piece of Italian marble. Each column is 13 feet in height and 35 inch in diameter. As the columns are spiral the genius of their craftsmanship consists in carving them to maintain the gravitational center supporting the huge super structure. The spectacular pillars are the centers of attraction. Such pillars are hardly seen elsewhere in the world. Erected in the year 1876, The Shahji Temple, turns to be one of the signature structures in Shiva Temple Vrindavan. A masterpiece in terms of art, this magnificent shrine blends beautifully different styles of structural designs in its framework. Its lovely marble structures and lofty spiral columns exposes outstanding architectural handiness. Though every nook and corner of the temple is festooned with marvelous artistic expressions the `Basanti Kamra’ or the darball hall surpasses all the other facades with its elegant charm. Exquisitely fashioned Belgian glass chandeliers and fine paintings that adorn the Darbarhall arrests the vision of the beholder. A bevy of stylish miniatures that embellishes the interior of the temple is a delight for all art lovers. Built in the form of a palace for Sri Radha Krishna, Shahjii temple rolls in to one the architectural splendors of Lakhnawi, Rajashthani and Italian susceptibility in its glorious construction. The deties of Radha Krishna is also called as Chote Radha Ramanji and the temple is constructed in a way that the idols have easy access to all part of the temple.

Shahji Temple, Vrindavan has been constructed by the wealthy merchant by the name Shah Kundan Lal of Lukhnow. This was done in the year 1876. It is one of the most important Tourist Attractions in Vrindavan.

How to Reach Vrindavan

Vrindavan does not have an airport. Nearest airport is Kheria Airport. Mathura railway station is the closest. There are no bus routes from other major cities to Vrindavan. Nearest bus stand is Mathura. Vrindavan.