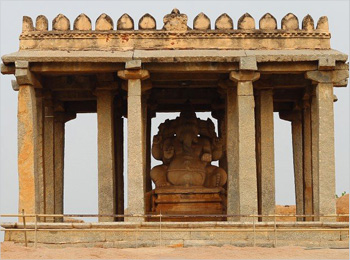 The Sasivekalu Ganesha Temple, a giant monolithic statue of Lord Ganesha, is one of the popular attractions in Hampi. The statue is 2.4 metres (8 feet) tall. The shrine is located on the southern foothill of the Hemakuta Hill in Hampi, not far from the huge Kadalekalu Ganesha temple. 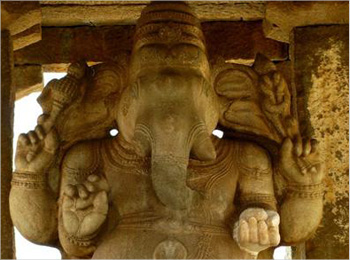 The history of the statue of Sasivekalu Ganesha dates back to the 16th century. According to an inscription found near the statue, the pavilion that houses the statue was built in 1506 AD. It was constructed by a merchant from Chandragiri (a place in present day Andhra Pradesh) in memory of the then king of Vijayanagara, Narasimha II (1491 – 1505 AD).

According to the Hindu mythology, Lord Ganesha is a deity who loves food very much. It is said that once Ganesha had eaten so much food that his tummy was on the verge of bursting out. Finding no other option to save his tummy, Ganesha caught hold of a snake and tied it around his tummy as a belt to prevent it from bursting. The statue of Sasivekalu Ganesha has a snake tied around the tummy in reference to this mythological incident.

Sasivekalu Ganesha is one of the most frequented sites in Hampi. The location of the temple can be easily accessed by visitors from all parts of the ruined town. The temple stands at a walkable distance from the Hampi bus-stand. The nearest airport is in Bellary. The nearest railway station is located at the town of Hospet. Hampi is well connected by road.