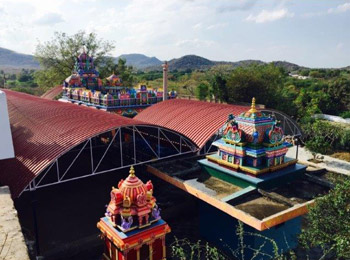 Sri Saraswathy Kshetramu is a famous Hindu Temple of Goddess Saraswathy located in the Ananthsagar, Chinna Kodur Mandal, Siddipet Division, Medak district of present Telangana. The temple was built on Friday, May 2nd, 1980. It is located between Siddipet to Karimnagar, 22 kilometres away from the former, 125 kilometres from Hyderabad and 63 kilometres from Medak.

Deekshas will be taken by devotees from Dussehra till Vasantha Panchami i.e. Makhasudda Panchami.

Every year from Makha Sudda Chavithi to Makha Sudda Shasti, Brahmotsava will be performed. In these three days, especially on the Vasantha Panchami i.e. Birthday of Saraswathy Devi is celebrated. Mahabhishekam is performed to all sacred Idols and Pooja with 64 Upacharas, Kalasasthapana, Homam, Saraswathy Yagnam and the last day Poornaahuthi. Annadhana Vitharana (Free meals) is given to all the devotees. In the afternoons, Lectures and Discourses will be organized with eminent scholars and people on Saraswathy. Eminent personalities of various professions will be honoured by the temple.

Poojas performed in this temple are Ashtothara Kumkumarchana, Akshara Sreekaram or Aksharaabhyaasam, Vadi Biyyam (offering of rice to the deity), Annaprasana (initiation of feeding rice to kids), and Vahana Pooja. Festivals like Gurupurnima are celebrated with much gaiety and fervour.

The nearest airport to the temple is Hyderabad.

The nearest Railway station to the temple is Chegunta Railway Station.

Government and Private buses from all places in Andhra Pradesh and Telangana are available to reach this Saraswathy Temple.