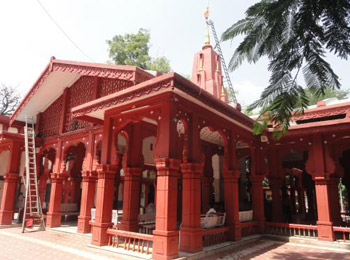 The Ganesh temple of Sarasbaug is around 250 years old and is considered as one of the heritage sites in the city of Pune. This shrine was built during the regime of Peswa by Nanasaheb Peshwa. The type of Ganesha worshipped in this shrine is Shri Siddhivinayak (God who makes wishes come true). The Sarasbaug Siddhivinayak shrine is visited by more than ten thousand people in a day on an average and this number shoots up to eighty thousand devotees during Ganesha Chaturthi and other festive times. The "Sarasbaug Ganapati" shrine is managed by Shree Devdeveshwar Sansthan, Parvati and Kothrud.

The shrine is situated on an isle which measures around 25,000 sq.ft. in the middle of the lake at the foothills of Parvati hill. Hence the vigraha (idol) of Ganesha inside the shrine is also popularly known as ‘Talyaatalaa Ganpati’ meaning Ganapati within a lake. The idol of Lord Ganesha is made of black stone. It is found holding a mace, bred, holy water and sweet on his each hands and is placed on a ornamented platform made of stone. The temple is decorated with lovely paintings, imageries of Hindu deities and tale about Lord Ganesh. In addition to it, during the year 1995 a small museum adorned with hundred idols of Ganesha, was also included in the temple grounds as part of the beautification work.

During the 18th century immediately after the construction of Shree Devdeveshwar Temple on the summit of Parvati hill, Shrimant Nanasaheb Peshwa focused towards the improvement and beautification of surroundings of Parvati hills. He proceeded to create a lake at the foot of Parvathi hills. An isle of about 25,000 sq.ft. (2,370 m2) area was left out in the middle of this lake. Later on, an attractive garden was made on this island. Shrimant Nanasaheb Peshwa gave it a poetic name, “Sarasbaug”. In 1784, Shrimant Sawai Madhavrao Peshwa constructed a small shrine in Sarasbaug and set up the idol of Shree Siddhivinayak Gajanan, the God he worshiped.

After the weakening of the Peshwa kingdom, the administration of Shree Devdeveshwar Trust was taken over by East India Company. Till 1842, the government ran the trust with the support of earlier clerks through the department. The same year, a well-regarded body of five people was set up and was chosen as a managing committee through which the activities of the trust were carried out. Post-Independence, the trust was registered as a public trust in 1950.

In 1861, the Bombay government gave the lake excluding the Sarasbaug isle to the Pune Municipality. The Municipality was unable to maintain the lake which led to breeding of mosquitoes. So it was decided that the water body would be closed by filling it with debris. This kept happening for some time. The northern side of the lake was more than half-filled. Shri Bhujangrao Kulkarni the corporation commissioner put up a beautiful garden on the south side of the lake which led to an increase in the number Shree Siddhivinayak. Due to the increasing crowd of devotees the contribution also started to go up.

The shrine constructed by Shreemant Sawai Madhavrao Saheb was very small. The sanctum sanctorum that was made of hard rock on top of the temple was intact till 1930. In order to enter the temple from West, there was a way intercepting the Parvati road. Similarly there was also an access to the temple from the east down the Nawloba temple into the lake. Both the approaches were poorly maintained. Further in 1936/37 the prevailing district session, R.B. Kondo Mahadev Kumthekar built marble steps and medium size sabha-mandap which was in existence till 1969. After the lake was transformed into a garden, both the accesses were improved, which again aided in increasing the number of devotees.

The trunk of the Ganesh idol is curved towards right sided. And it's mentioned in the Hindu mythology that Ganesha idol with right headed trunk is often called as “Navasacha Ganapati” or “Navasala Pavanara Ganapati” ('Ganapati bestows whenever humbly genuinely prayed a wish' in Marathi).

How to Reach Sarasbaug Ganesh Temple

The closest airport is Pune airport which is at a distance of 15.5 km from Sarasbaug Ganesh Temple.

Pune railway station is at a distance of 6 km from Sarasbaug Ganesh Temple. One can get auto rickshaws and taxis from there.

There are many private buses that link major cities like Mumbai and Bangalore to Pune and one can hire the taxi to reach Sarasbaug.